A night at The Convention with Jabari Parker, Julius Randle and Andrew Wiggins

Three hyped up freshman proved they're worthy of the admiration and massive attention from scores of NBA personnel at the United Center on Tuesday.

Share All sharing options for: A night at The Convention with Jabari Parker, Julius Randle and Andrew Wiggins

CHICAGO — A day before many of the NBA's most recognizable GMs and a reported 80 league scouts descended upon Chicago to watch four of the top five ranked teams in college basketball, the Champions Classic already had an organic nickname: The Convention.

The NBA doesn't just gather in unison to prepare for the next draft over seven months in advance every year. They were here because the talent on the floor was the culmination of at least two years of hype surrounding the most heralded freshman class since 2007. That class brought Derrick Rose, Kevin Love, Blake Griffin and James Harden to college basketball, among others. This one has Andrew Wiggins, Julius Randle and Jabari Parker. On Wednesday night, they were all in Chicago, and the NBA pressed the pause button to take it all in.

It didn't take me very long to realize the NBA presence here was no exaggeration. Like any good millennial, the first thing I tried to do upon arriving courtside for shootaround of the first game — No. 1 Kentucky vs. No. 2 Michigan State — was upload a photo to Instagram. This is easier said than done in a place as crowded as the United Center was on Tuesday.

I had a perfect shot. As Randle and the rest of Kentucky's historic recruiting class was going through layup lines, Chicago Bulls coach Tom Thibodeau was standing off to the side in a completely unfamiliar state: he was laughing. Thibodeau was talking to Boston Celtics GM Danny Ainge about who knows what, but it was apparently hilarious. The fact that Thibodeau was even in the building instead of in a cave watching tape ahead of Friday's game against the Raptors was the first indication this night was really something.

I took a step to the side after I took the picture and tried to upload it. That's where I bumped into Allan Houston, who was passing by to talk to ESPN's Mike Wilbon and a couple other guys wearing a "scout" credential. 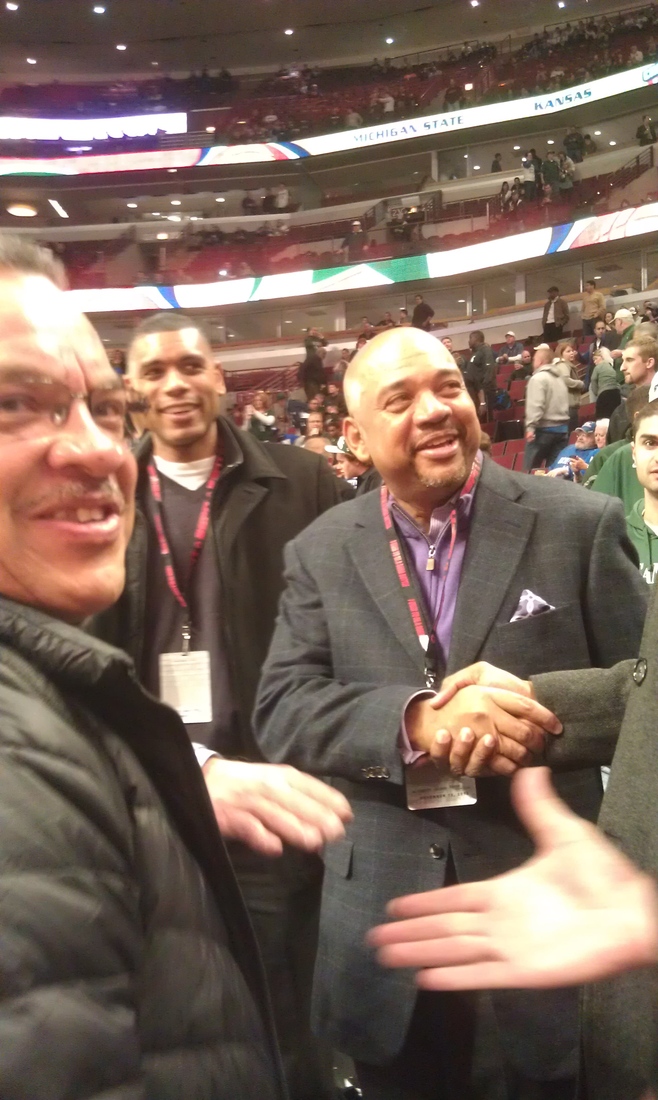 You couldn't take a step at the United Center without running into someone famous.

Rule No. 1 of attending an event like this is snooping around where you shouldn't be as much as possible. Fast-forward to midway through the second half of the first game, and I had to follow my own advice. After sitting in the press box located in the nosebleeds of the UC, another reporter friend and I noticed the row of seats behind Michigan State's band was completely empty. It was our duty to sneak down.

This is so much easier to do when wearing a press credential. As we slid into place behind the Spartan trumpet players, there was no lack of familiar faces surrounding us behind the basket.

Raptors GM and reigning NBA Executive of the Year Masai Ujiri was there. Cavs GM Chris Grant was there. Shareef Abdur-Rahim and Morris Peterson were there, too. Not everyone was aware how big of a deal this all was, though.

As Kentucky was in the midst of chipping away at the MSU lead, Daryl Morey was standing just in front of me, holding ice cream, getting asked by a security guard for his credential.

Naturally, there's about 10 horrible pictures of Morey eating ice cream on my phone. That's just the type of night this was.

Go to Chicago, post up in a great seat and grab some ice cream. There was some incredible young talent on the floor Tuesday night, and all three freshman totally lived up to the hype.

I've been around Michigan State people enough to know they have two defining qualities: school pride and functioning alcoholism. Both were on display in the lower bowl of the United Center on Tuesday.

The UC doesn't always have the greatest in-game vibe for basketball, but the college kids changed that. It was jarring to hear pep bands in place of the standard regrettable iPod fare. It was wild to observe just how into it the crowd was as someone who rarely attends college games.

Go Green — Go White over and over. This type of call-and-response isn't happening at an NBA game.

More: Best and worst of the tip-off marathon

For a half, No. 1 vs. No. 2 wasn't all it was hyped up to be. Michigan State was dominating Kentucky. The Spartans opened with a 10-0 lead punctuated by an alley-oop to Branden Dawson that had the crowd going crazy. Kentucky was trying to get the ball into Randle, the best of a recruiting class that included a record six McDonald's All-Americans, but he was being met by a forcefield of elbows. Randle couldn't get position and UK couldn't find clean looks.

The Wildcats just have too much talent to struggle offensively all game, though, and they would turn it around in the second half. After finishing the first half 1-for-5, Randle took over. He was playing straight-up bully ball, taking it into the teeth of the MSU defense and finishing through as many defenders as MSU could throw at him. The man is gargoyle come to life: chiseled and fast and powerful. He looks like a military super soldier invented in a lab.

At a certain point, the MSU defense just had no answer for him. This move, over three defenders, put the game within two.

He finished with 27 points and 13 rebounds on 9-of-14 shooting, though he did have eight turnovers and missed four consecutive critical free throws late. Still, get a head start looking up synonyms for "beast," because that's exactly what Julius Randle is.

It wasn't enough to erase the Michigan State lead, though. When Dawson tipped in a shot to ice the game with just seconds remaining, the four MSU bros behind me — at least three with backwards hats, one with tribal warrior arm tattoos — jumped and screamed and hugged each other all at the same time.

You know you've got a great night of basketball when No. 1 vs. No. 2 is the undercard. The main event was Kansas vs. Duke, pitting international man of mystery Andrew Wiggins against Chicago's golden boy Jabari Parker. As the band members switched out and Daryl Morey kept eating ice cream, I realized my spot might be a problem.

This is what I was looking at: 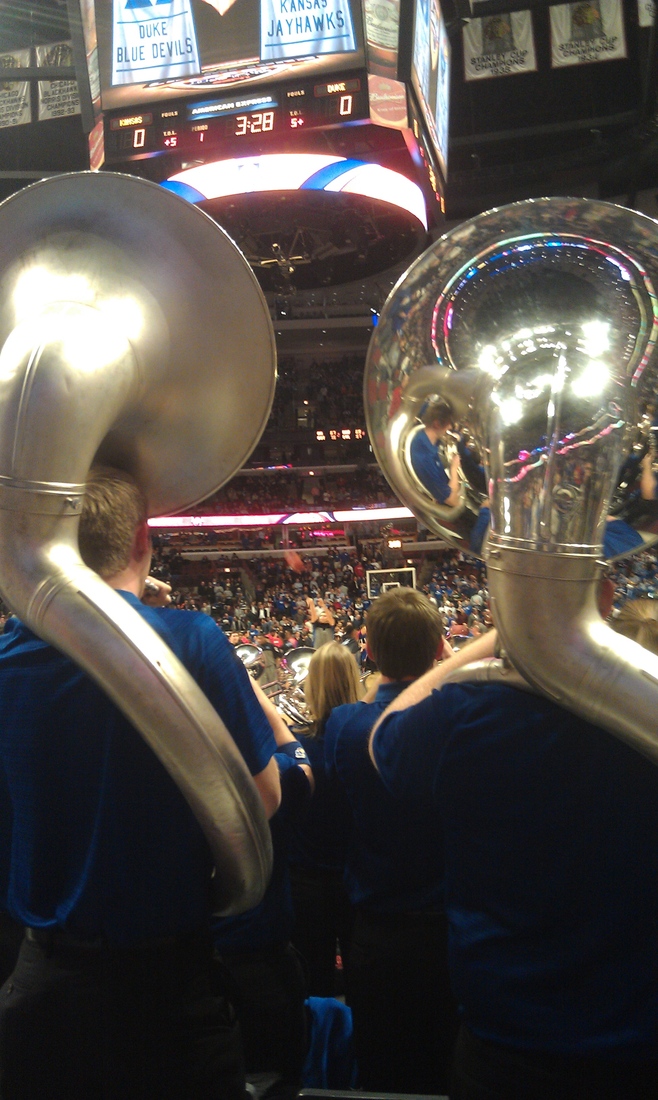 Damn tubas. I don't think anyone has ever had this problem at a Bulls game, but I sincerely hope I'm wrong.

The 2014 draft class is loaded, and the No. 1 pick will probably depend on team need and fit, but at least at this point in the conversation, Wiggins is the dude everyone wants to see. The Canadian-born wing has absurd athleticism, but that's all anyone really knows about him. He's great at running and jumping, but is he skilled enough to justify the hype that had some calling him the best recruit since LeBron James?

Wiggins is already very good, and the sky is the limit, but he never stood a chance Tuesday night, even if his team eventually came away with the victory. It was all about Parker's homecoming.

"COORDINATION IS A SICKNESS. YOU DON'T HAVE IT."

These were the words of the local man sitting behind me for the Kansas-Duke game as Jabari Parker soared to hammer home an alley-oop at the beginning of the second half. It is perhaps the most profound basketball-related statement I've ever heard.

Jabari goes strictly on a first-name basis in Chicago. He's earned it. The man won four state titles at Simeon. He's incredibly bright and is going to be a great ambassador for a city plagued by senseless violence someday. He's basically a folk hero here, and proved he was every bit as good as advertised against Kansas. 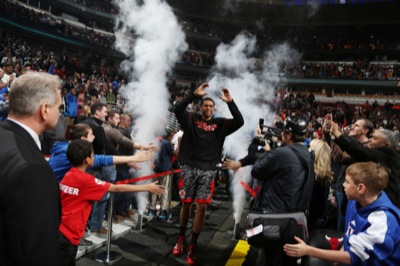 Jabari Parker is ushering in a host of other great prospects from Chicago.

Jabari came out dealing on Tuesday, draining four threes, making some nifty passes and finishing one highlight-reel layup en route to a 19-point first half. He was playing out of his mind and it was perfect. His hometown was loving it.

Wiggins is a fantastic prospect with loads of upside, but Parker is the player in this class built to impress the most right away. He's ridiculously skilled and bigger than almost everyone on the court. His game has always been so refined, but it's great to see him mature into the player he is today.

The first time I covered Jabari, he was a freshman in high school at Simeon. The size, stroke and footwork were evident even back then. People around Chicago's high school hoops scene always thought he'd find himself in this position someday. They were right.

While Jabari stole the show, it was Wiggins and the Jayhawks who took the game.

This Kansas team is going to be a problem: they're huge and athletic and as talented as any team in the country, including Kentucky. Wiggins and Wayne Selden were McDonald's All-Americans and Joel Embiid would have been if he was allowed to play out of his prep school. That Kansas' offense already looked as good as it did while UK was plagued by turnovers suggests the Jayhawks are going to be around for the long haul in March.

TJARKS: Parker gets better of Wiggins

Wiggins sat much of the first half because of foul trouble, but he found his footing after halftime. He scored 16 of his 22 points in the second half, including a step-back jumper and and-one dunk on consecutive possessions to ice the game. There's the temptation to call Wiggins overhyped because of just how much publicity he's received, but it's pretty clear he's going to be an amazing pro player. By the time he's 25 years old, I don't think it would surprise anyone if he's one of the five or 10 best basketball players in the world.

The fact that Parker could go No. 3 — maybe even No. 4 behind Australian wing Dante Exum — is the reason everyone is losing their mind over the 2014 draft class. It doesn't seem unreasonable that Wiggins, Randle and Parker could have been the first three picks in last year's draft if high school players were still allowed to enter.

Where would 2013 No. 1 pick Anthony Bennett go next summer? I like Bennett as a player despite his slow start in Cleveland, but it's a fair question to ponder. This freshman class is just that loaded.

The hype is real. The tanking will only get more egregious. College basketball's regular season is relevant again. The only shame is that a night like Tuesday, with so much talent on the same floor, can't happen more than just this once.

• What to watch in college basketball's 24-hour marathon