The Pacers and Spurs are ahead of the pack early while a certain team in New York is struggling with their revamped starting five.

The Indiana Pacers are the only undefeated team in the NBA and hold a three-game lead over the defending champion Miami Heat heading into the third weekend of the season. Paul George has dropped at least 20 points in each of Indiana's eight wins, propelling his team to a perfect record.

The San Antonio Spurs own the second-best record in the league, dropping a single game in their first nine contests. They're holding opponents to an average of 95 points per 100 possessions, according to Basketball-Reference. Always steady, those Spurs.

Sixers, Suns must stay the course 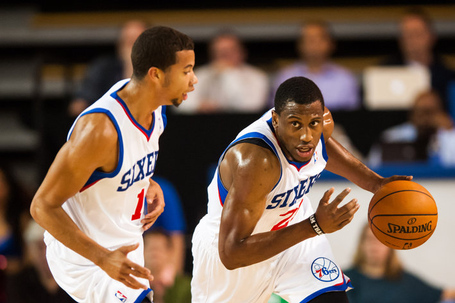 The fact that the 76ers and Suns are off to surprising starts shouldn't change their strategy of building for the long term, even if it costs them an unexpected playoff run.

It's early in the season and there are plenty of surprises sprinkled throughout each conference, but let's start with the East. How about the Philadelphia 76ers holding the third-best record in the conference? They've gone 5-4 to start the season, led by Evan Turner's 23 points and 6.7 rebounds per game and a stunning start to Michael Carter-Williams' career. The rookie point guard is all over the score sheet, averaging 17.4 points, 7.6 assists, 5.4 rebounds and 2.6 assists.

What about on the other end of the spectrum? The Brooklyn Nets have won just two games over their first seven contests and have the second-worst record, ahead of only the Washington Wizards. It was expected for their revamped starting five and rookie head coach to take time to get together, but all that talent could only muster up two wins? Tom Ziller spent some time looking over the poor start and thinks it's time for Deron Williams, Joe Johnson and Brook Lopez to take command of their team.

One last shout out to the Charlotte Bobcats who are sitting at an even 4-4 and in the playoffs. If the season ended 70 games early or so. Here are the full Eastern Conference standings:

The Spurs lead the Western Conference, followed by... the Portland Trail Blazers? Yes, Portland has a 6-2 record, good for second in the conference one season removed from missing the playoffs. LaMarcus Aldridge continues his duty as Portland's pillar to lean on, putting in 21.3 points per game and has been a monster from mid-range. Check out his shot chart on the season (let's just ignore that left elbow, though): 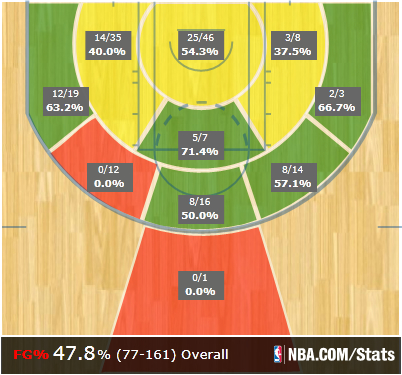 The Minnesota Timberwolves are off to a 6-3 start and Kevin Love is dropping 27.1 points and 14.2 rebounds per game. Coincidence? I think not.

Rick Adelman has the 'Wolves offense humming to the tune of 108.1 points per 100 possessions. They're also playing at the fourth-fastest pace in the NBA, averaging 99.1 possessions per 48 minutes, according to Basketball-Reference. That's without swingman Chase Budinger, although he has recently been cleared for on-court activities after undergoing surgery to repair a torn meniscus.

Most surprising out West? The Phoenix Suns. They've won five of their first eight games riding a stingy defense that's allowing 99 points over 100 possessions on average. Summer acquisition Eric Bledsoe is playing so well he could become too expensive of a commodity for a rebuilding Phoenix team that looks far better than expected.

We could go the other way in the "most surprising in the West" category with the Memphis Grizzlies on the outside of the playoffs. The same roster that made the Western Conference finals is 3-5 to start the season. That's worse than the Lakers 4-6 start without Kobe Bryant and Steve Nash already missing time because of a problematic back.

• The Hook: D-Will, Joe Johnson and the overloaded Nets