Joakim Noah is known as one of the league's most selfless players. The Bulls' All-Star discussed how he developed that mindset and much more in an interview with SB Nation.

TORONTO -- The first word out of Carlos Boozer’s mouth is "enthusiastic." The second? "Passionate." If you’ve watched the Chicago Bulls play, you can probably guess which teammate he’s describing.

Joakim Noah is beloved in Chicago because of his enthusiasm and his boundless energy. He’s the team’s emotional leader, its defensive anchor, the guy who never stops communicating on the floor and hyping his teammates up off of it. He’s beloved because he’s seen as a man of the people, unafraid to be different or to speak his mind.

Or as Bulls big man Taj Gibson puts it: "He’s outgoing, crazy and a free spirit. All of those things put together."

Noah's also an All-Star whose skills and smarts make him one of the most versatile big men in the game. Before his 18-point, nine-rebound, three-assist performance in the third game of Chicago's current five-game winning streak on Friday, Noah sat down with SB Nation to discuss what it means to be a great teammate, what he’s learned in the league and the opportunities that basketball has given him. 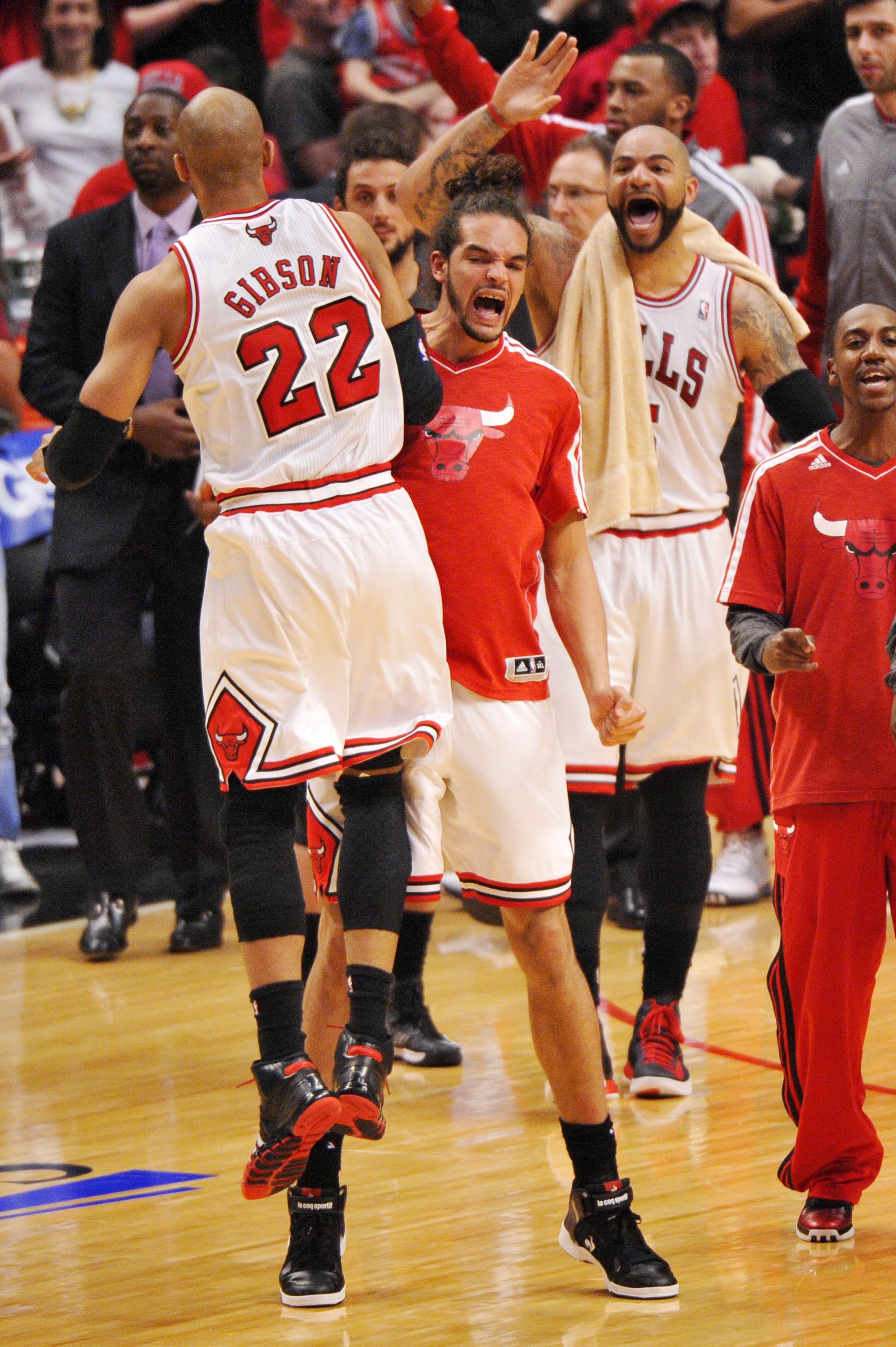 Taj Gibson: "He's one of those teammates that just believes. He's one of those teammates that really worked hard his whole life so he understands how the bottom feels. To get where he's at, he's a hard worker and it shows and it rubs off. He's real team-oriented, he's always into the team. When you win two championships in college, that kind of rubs off on you as far as wanting that kind of success for your team."

Carlos Boozer: "It's great that other people are recognizing his ability, his talents because he works his ass off, man. He's in the gym all day long, all the time. You gotta know where he came from to where he's at now. His offense has gotten better. To me he should have won Defensive Player of the Year last year. I don't know how he didn't win that last year. I think he has a chance to win it this year, too."

You’ve played with a lot of the guys in this locker room for a while. Do you think chemistry and continuity is underrated in this league?

Yeah. It’s the most underrated thing, I think. Chemistry’s the most underrated part of basketball. People think it’s a game of math. It’s not math, it’s chemistry. You gotta play together, it’s all about experience, it’s all about knowing people’s tendencies. People think that because one guy averages 20 points and 10 rebounds and one guy averages 25 points and one guy averages 12 points, it’s going to equal whatever that equals and they’re going to be a great team. That’s not how the game works. It’s a lot of work, there’s a lot of work behind closed doors that people don’t see and I think it’s coming for this team.

You won two titles in college. Was it eye-opening when you got to the league and saw personal agendas or did you expect that?

The sacrifice, it’s not an easy thing. People don’t talk about the sacrifices and they think it’s all fun and games. But it’s not. Even in my championship years, there were some tough times during that year, some bumps on the road. It’s all about how you deal with adversity. Can you come in the next day after a tough loss or after a great win and come back and have the same mindset to practice and get better every day?

Who taught you to have that mindset?

I think it just comes from experience. People talk about those championship years at Florida and I remember we had some real tough patches during those two years, lost three in a row. Maybe we were feeling too good about ourselves after a certain amount of time. We had a lot of talent but a lot of guys had to sacrifice their offense, those individual accolades to be the team that we wanted to be.

"When you win, everybody gets to eat" -Joakim Noah

You’ve said Billy Donovan used to tell you to stay in the moment. Is that tough when you have people like me constantly asking about things that happened in the past and the things you want to accomplish in the future?

It’s a lot easier said than done, that’s for sure. But I think that’s probably the most important thing in sports. Just living in the moment. Coach Donovan used to preach it all the time. When I was in college, people wanted to talk about the NBA. People wanted to talk about the year before when we won the championship, but we had a great opportunity in front of us. Sometimes when people take you to these places, it just puts added pressure and you’re not enjoying what’s at stake. And I’m so happy that he preached that to me because those were the best times of my life.

When you see a guy like Jimmy Butler putting the work in, going from a late first-round pick to earning playing time and establishing himself in the league, what’s that like for you?

Jimmy’s taking it one step at a time. All these things, it’s all a great learning experience. I tell him all the time that it’s not about people’s expectations. That’s the hardest thing to deal with. Don’t put added pressure on yourself. We’re already living a crazy life. We’re always on the road playing. It’s always non-stop. But it’s not about expectations. Just do what you do, work hard for the team and good things are going to happen. When you win, everybody gets to eat.

That was something you had to learn too, right? You’ve said you put pressure on yourself when you got your contract.

Exactly. It’s a lot of things. Whether it’s that, whether it’s people’s expectations or the contract expectations, all these things. There’s enough pressure as it is. You don’t have to add all this extra pressure on yourself. Just go out there, play the game, enjoy the process. 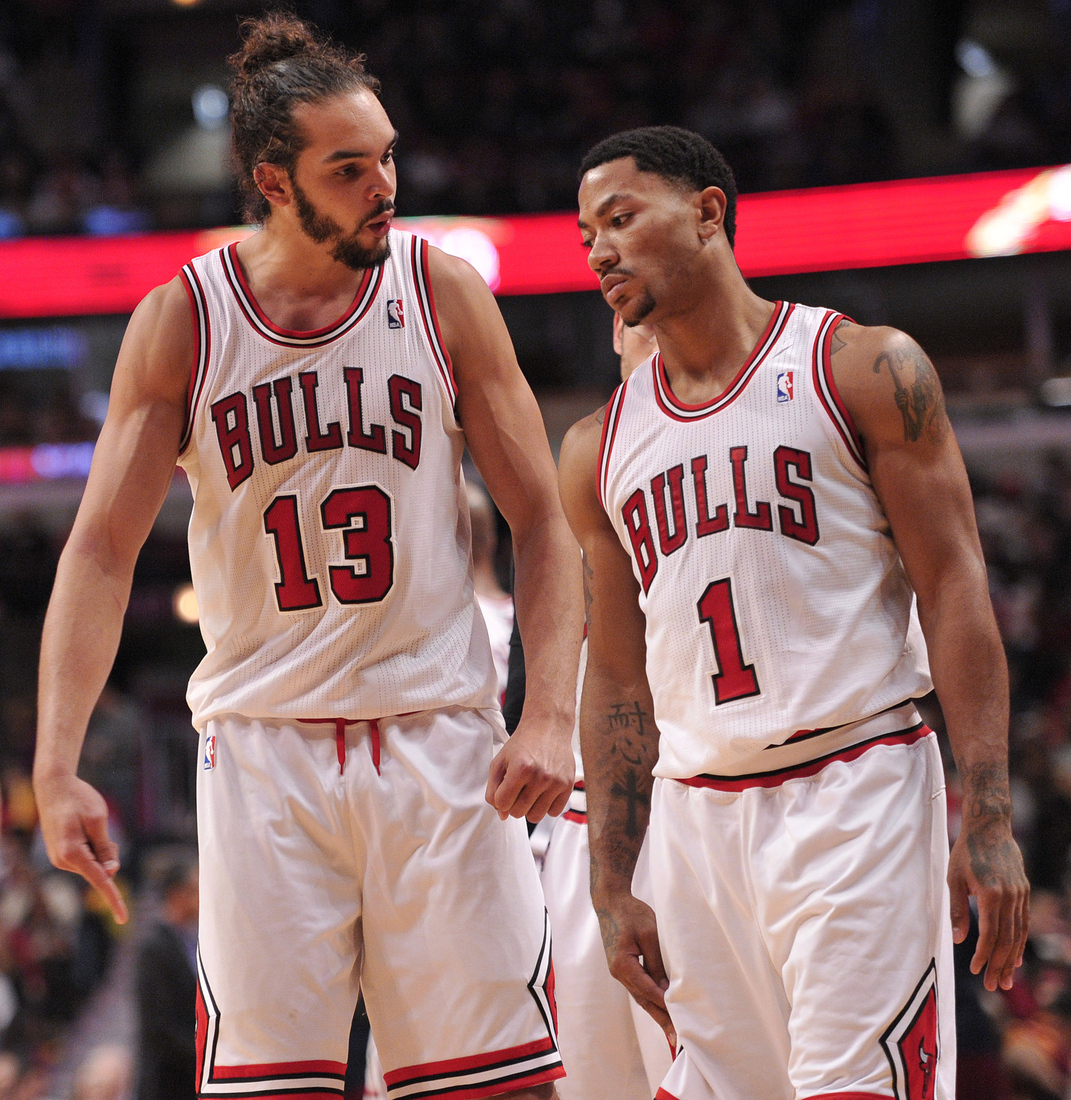 What do you think about when you see the scrutiny and pressure that Derrick Rose is under now?

I think he handles it great. I think he’s probably the most composed player I’ve ever been around. He’s built for this. But at the end of the day, it’s our job to try to make it as smooth on him as possible. It’s a team game. We’ve just gotta keep grinding, keep getting better because the more we win, the better it is for everybody.

Now that you’ve been an All-Star and people actually talk about your talent and skill instead of just your energy, do you still feel like an underdog?

I always feel like an underdog. When it comes to basketball, I came a long way. I was a ballboy at ABCD camp. Even in New York, I was never seen as, like, one of those high-ranked players. I was never pampered in the AAU process or anything like that, even though I kinda lived during that time where AAU players were [smiles], you know? [I was recognized] a lot later, going into my senior year. I think it just makes me appreciate what I have a lot more.

Does that go along with your All-Star experience last year? You had that series of tweets, you said you didn’t sleep for days, you played the game like it counted.

Yeah. It was special. It’s a special moment. You work hard all your life to be given an opportunity to play with the best players in the world on one court. I didn’t want to take it for granted. I’m not the type of player that’s guaranteed it. To have that opportunity to play in a game like that, it was very humbling and I just felt like I had a lot of people to thank.

In an interview you quoted your grandfather saying, ‘I know where I’m from, therefore I know who I am.’ You’re sort of from everywhere. How does that give you a different outlook or define who you are?

I think it definitely defines who I am. I come from a lot of different places so I think I see things a little bit different. I don’t have that same sense of patriotism or anything like that.

I've moved around and I relate to that part.

How much do you cherish the opportunities you have to go to different countries and do the things that you do, like working with Yao Ming in China?

I think it’s special. It’s very special. It just makes me realize how far basketball has taken me. I’m getting to learn a lot of things from people who have unbelievable stories and unbelievable experiences. And to be able to learn from them and see how Yao Ming moves in China, how his operation is run in China, how his charities run, it’s very interesting to me. I’m living my dream.

Who are some other people outside of this organization who have had an impact on you? I know you’ve had some contact with Kareem Abdul-Jabbar, you’ve worked with Dikembe Mutombo ...

To me it’s interesting to learn from all these guys and have an opportunity to maybe have some contact and talk a little bit about things. But Dikembe, Kareem, even Spike Lee, just being able to talk to him …

What’d you talk to Spike about?

I’m trying to do a lot of things for the inner city kids in Chicago. He’s somebody who has a lot of experience in helping inner city [kids]. His movies make a big impact on the community. He’s definitely a visionary, so I ask him questions and ask him what he thinks the problems are. Social issues and things like that. I don’t like to talk about things like that because it kind of puts pressure on him, maybe, but it’s interesting to learn. It’s just interesting to learn things from the older, wiser guys. Dikembe, too. Just a great ambassador for the game. Especially when I worked on things in Africa. He’s Uncle Deke, you know?

• The Hook: What did the Knicks expect?

• Nicolas Batum is Portland's Mr. Everything