Derrick Rose injury: How do the Bulls survive this season?

Depth at point guard and financial questions surround the Chicago Bulls now that an MRI revealed Derrick Rose will need surgery on a torn meniscus.

Share All sharing options for: Derrick Rose injury: How do the Bulls survive this season?

The news of Derrick Rose's torn meniscus could have been better and could have been worse. No doubt, it is a disappointing setback for one of the NBA's most captivating players, but now the Chicago Bulls must move on without their leader and MVP.

What's ahead remains uncertain, both this season and beyond.

Immediately, depth is the first point of concern for the Bulls. Chicago signed Kirk Hinrich to play in place of Rose when he tore his ACL more than a year ago, but as he slides into the starter's role, there are major question marks behind him.

Only two players left on the roster are point guards. One is 38-year-old Mike James, who has three minutes to his name so far this season. The other is second-year pro Marquis Teague, a 20-year-old with more than 400 minutes on his resume, but a player not yet ready to run a playoff basketball team, nor one capable of defending arguably the league's deepest position. After all, Chicago was shopping Teague this offseason but found no suitors, according to ESPN's Marc Stein. That makes sense considering the Bulls wanted a first-round pick in return for an unproven player.

The issue might go beyond finding able bodies, too. When the Bulls were without Rose during 2012-13, they leaned heavily upon point guard Nate Robinson to bring his immediate scoring off the bench. Firepower-wise, Chicago doesn't have an answer with Robinson now playing for the Denver Nuggets. Within an offense ranking 25th at just 100.6 points per 100 possessions, according to Basketball-Reference, more unfair pressure is directed toward Carlos Boozer, Luol Deng and Jimmy Butler, who is now injured himself, to create something from nothing when the sets break down. And nobody was scoring more than Boozer's 16 points per game before Rose went down. 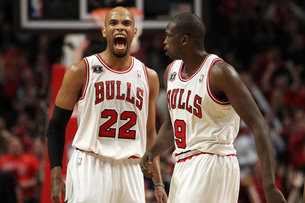 How will the repeater-tax change the Bulls' plans?

The good news: perhaps the Bulls don't fall too far on the lowly Eastern Conference totem pole. At 6-5, Chicago is fifth in the East. It's early, but between all the young teams hovering around .500 (Charlotte, Philadelphia and Orlando) and some new-look rosters disappointing with similar records (Washington, Detroit and Cleveland) the Bulls arguably have the most cohesiveness after Indiana, Miami and perhaps Toronto. Tom Thibodeau's defensive approach will keep them in the hunt.

There's also a bigger picture to look at in the wake of Rose's injury.

Chicago ranks in the top five in NBA team payroll and are $7.5 million over the luxury tax threshold of $70.3 million, according to SB Nation's Mark Deeks. Before Rose tore his meniscus, Deeks saw Chicago as a team close enough to getting under the luxury tax that they could do so with a trade or two. It would be especially appealing since they're facing the incoming repeater's tax, an additional payment in the new collective bargaining agreement that penalizes teams for continually going over the luxury tax line. Per Deeks:

So what can the Bulls do? Trading Taj Gibson to another team for no returning salary would get them under the luxury tax this season. Doing so would save them roughly $20 million this year alone, plus $25.45 million in the future salary owed to him and an incalculable amount potentially saved in repeater tax.

Rose's injury only complicates Chicago's decision-making. Again, they could still challenge as a playoff team, but does trading a player like Gibson hurt those chances? The Bulls have rookies Erik Murphy and Tony Snell at the back of the bench. Does handing them more minutes when a veteran contract gets moved make Thibodeau cringe?

What's the value of saving money now and down the road, and what's the loss if the Bulls -- assuming Rose is out for the year -- make it to the second round of the playoffs rather than getting knocked out in the first?

And what if Rose returns this year?

These aren't easy questions, but now the Chicago front office certainly has to think about them.

• CP3 shows we love the conventional

• The repeater tax will change the NBA