The Bulls star is out for the season for the second straight year, and his latest injury leaves a ripple effect for the entire franchise.

"Tragedy is when I cut my finger. Comedy is when you fall into an open sewer and die."

What happened to Derrick Rose in Portland is not a tragedy. No one is dead. No one lost food or shelter. Other than Rose himself, no one's life is actually worse than it was before the weekend started. But much like a real tragedy, those of the sports variety are capable of taking a seemingly typical night and retroactively making it meaningful and unforgettable for the worst reasons.

At its most basic level, this is what happened near the end of the third quarter on Friday night in Portland. 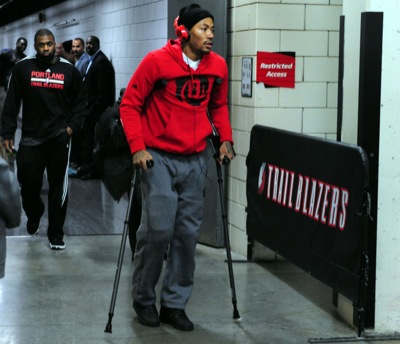 ZILLER: How to preserve the Rose era
FIXLER: Chicago must wait again
ZIMMERMAN: What next for Chicago?
BLOG A BULL: Complete coverage

My Friday night looked a lot like a normal Friday night: I was hanging out with the same people I always hang out with, eating pizza, having a few beers and watching the Bulls.

The Bulls were in Portland for the second game of their "Circus Trip" — an annual excursion out West when Ringling Bros. And Barnum & Bailey Circus take their elephants and cotton candy to the United Center for a weeklong run. It is usually painful. From 1999-2004, the Bulls lost 37 games in a row on this thing. Their first victory in 2004 at Utah — led by rookies Luol Deng and Ben Gordon — was very seriously the high watermark of the post-Jordan era for much longer than it should have been.

The game against the Blazers was the second of the Bulls' road trip, and it was a measuring stick. Portland is off to an incredible start thanks to a beautiful offense; the Bulls had been sputtering all season and were coming off an embarrassing loss in Denver the night before. It looked as if the Bulls might be finding themselves, though: Chicago was up 15 going into the break thanks to a huge first half from Rose.

Rose had struggled through his first nine games of the season after an 18-month rehabilitation from ACL surgery that produced more hot sports takes than anything this city has seen in a long time. He looked fine physically — still explosive with his first step, still able to hit a gear few others can approach in the open court — but he was never able to get his bearings straight. His timing was off. He seemed like he didn't know where his teammates were on the court. He wasn't getting foul calls. He was missing the type of looks that made him so unstoppable in the first place.

Though Rose was just 5-of-16 in that first half against the Blazers, he was finally beginning to resemble his old self. Despite the rough start, this was never really in question. It always seemed like the only thing Derrick Rose needed to get back to being Derrick Rose, the youngest MVP in league history, was a few more repetitions. Maybe 10 games was enough to find his footing.

The Bulls' lead was already into single-digits by the time I left the bar to watch the rest of the game at home. I don't remember how exactly I heard the news, but it doesn't matter. Within in a few minutes, full-fledged panic had already set in throughout Chicago. My phone was blowing up with four-letter texts; my Twitter mentions started to feel like I was observing my own wake. For Bulls fans, this was tragedy to the point of comedy. There was nothing else to do but laugh at what a cruel twist of fortune this was. 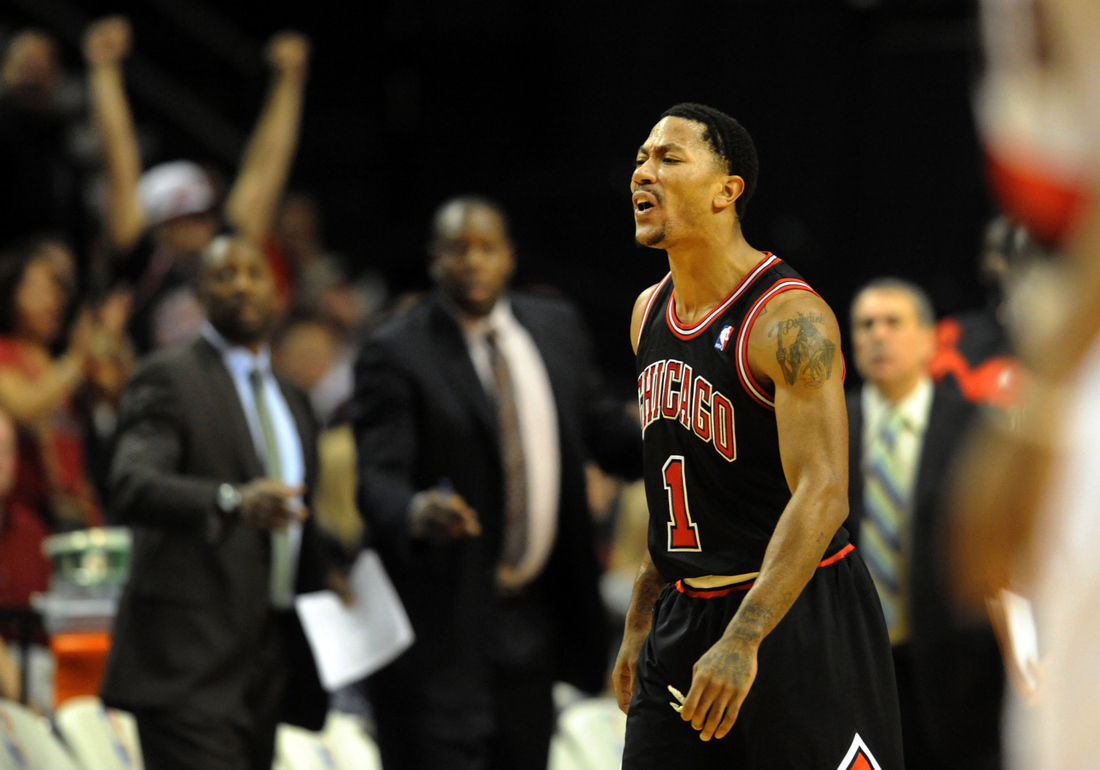 There are supposed to be lessons gleaned from hardship, though I can only think of one so far: never trust a radio reporter who quotes David Matthews Band in his Twitter profile. Everyone was already dreading the worst even before a tweet about the Bulls 'fearing a possible ACL tear' made the rounds, but it was at that point that the only logical coping mechanism seemed like exaggerated sadness.

I did on Friday exactly what I did when Rose tore his ACL after the first game of the 2012 playoffs: sat in a living room and passed around a bottle of whiskey with a few friends. We put on the scene in "The Royal Tenenbaums" where Luke Wilson's character intentionally cuts himself shaving while Elliott Smith plays in the background.  Additional YouTube choices included music videos for "Nothing Compares to You," "Mad World" and "Adam's Song." There are Vines and almost all of them are partially ruined by maniacal laughter. This was the sewer Mel Brooks was talking about.

Saturday was flushed with anxiety. Waiting for the MRI results felt like an eternity. It seemed like any other franchise would have had the knee checked out immediately, but because this is the notoriously stealthy Chicago Bulls, it didn't hit until almost 5 p.m.

I'm telling you: no fanbase has ever been so relieved to see its star player suffer a torn meniscus as Bulls fans were on Saturday. Of course, it doesn't matter: Rose is out for the season anyway. It's the right move from a PR standpoint after everything that happened last season. Still, it's hard to take heart in a PR victory right now.

What's already certain is that the rest of this season is going to be impossible to get through. The Bulls were an eyesore without Rose last season, but at least they had the chance of Nate Robinson doing his best Rose impression once every few nights. That team was prepared for life without Rose, this one isn't. No one here can get their own offense. Bulls games are about to be a race to 70 points.

The rest of this season is going to be impossible to get through.

Already, people are talking about tanking. Jabari Parker's name is coming up way too often. Never mind that the East is so bad, the Bulls might still get home-court advantage in the first round of the playoffs even without Rose. A Tom Thibodeau team probably couldn't tank if it tried.

The sad reality is that the Bulls are doomed regardless. This season began with a set of contradictions: even though they hadn't had Rose for the last two playoff runs, this year still felt like a last chance more than a new beginning. Luol Deng is a free agent after the season, and he's widely expected to sign elsewhere. The organization already had major beef with the way Thibodeau was managing minutes and injuries. Even though Rose's latest injury isn't the product of coaching abuse, it wouldn't be surprising if this was event that caused internal tension to boil over.

Now, do the Bulls blow it up? Is a Deng trade coming soon? Are they really going to pay the luxury tax for the second season in a row — with the repeater tax looming — for a dead-on-arrival season? Would Thibs quit?

Tangibly, Rose's injury puts all of this on the table, and much more. Even worse, it's probably going to destroy Rose mentally.

Rose's feel for the game was always a huge part of what made him so special. He didn't think, he reacted. He didn't even play pick-up. Now he's played 10 games in the last two seasons and 50 games in the last three. He's twice suffered a season-ending injury on a non-contact play. Can anyone reasonably expect him to return next season with zero reservations?

Rose isn't Brandon Roy because his condition isn't degenerative. He isn't Gale Sayers because this isn't 1968. He'll be back, sure. But will he be the same?

It seems unlikely, and that's what hurts. It's impossible to explain what D. Rose means to this city if you're not from here. He was everything. Homegrown, humble, sublimely talented. He was the perfect face for a franchise.

There's plenty of time to think about what's next, but sometimes these occasions need a moment to breathE. That's how this feels. You can't move on until you've realized what's lost.

• The Hook: Sometimes the tank chooses you

• Derrick Rose out for the year following knee surgery