Why are the Philadelphia 76ers 3-0? Because they've changed the conditions of games with their relentless dedication to running the floor. Plus: why Derrick Rose is struggling, the sacrifice of the week and more notes from the beginning of the NBA season.

Share All sharing options for: Pace, pace, pace: The secret to the Philadelphia 76ers' early success

I admit it: I scoffed when new Philadelphia 76ers coach Brett Brown was prattling on about his desire to get his team out in the open floor. We've seen this lip service too many times from too many coaches for us to believe it. Besides, even if the 76ers would run, that'd just mean that many more possessions where their lack of talent would show.

But after three games, two things are clear: Brown's team has backed up his words with actions, and they're sucking more talented teams into their style, not the other way around. 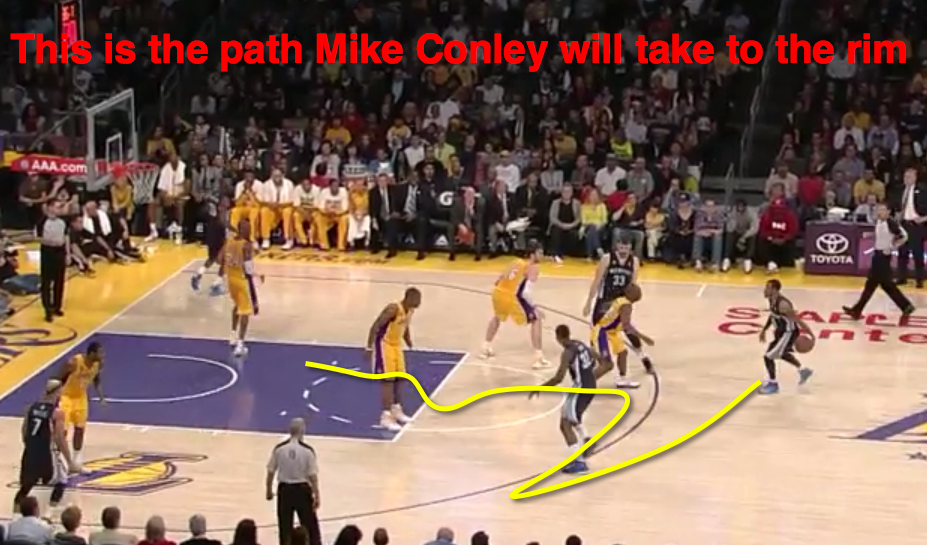 In defeating the Heat, Wizards and Bulls last week in stunning fashion, the 76ers have enforced their will on their opponent. They can't win conventionally, because they don't have the talent, but by running at all costs, they're changing the conditions of the game. Their three victories have looked more like Olympic 4-by-100 relays than basketball games. Thanks to Brown's emphasis on fitness, the 76ers will have the advantage on any opponent in this type of setting.

When do they run? The better question is, when don't they run? They get the ball up quickly on missed shots, with guards like Evan Turner and Tony Wroten encouraged to push the ball themselves off a rebound. They even run off made shots. For example:

And once they get in the frontcourt, they shoot quickly. Specifically, they try to shoot from one of two zones: the rim and the three-point line. Goal No. 1 is to get to the basket, and everyone, whether it's Michael Carter-Williams, Turner, Thaddeus Young or especially Wroten, are encouraged to make quick moves off the dribble. After that? The goal is to launch tons of threes, even if the shots are somewhat contested. More threes means a faster game and increased variance.

In other words, the 76ers' strategy is the same as the No. 14 seed in March Madness every year. Turn games into three-point shooting contests, and you never know what will happen.

Everyone is encouraged to fire away. Young became an impact NBA player the second old coach Doug Collins encouraged him to stop shooting threes and instead slither along the baseline. Now, he's being asked to revert and launch when open. Spencer Hawes, the team's center, is attempting over four and a half threes per 36 minutes; he has never attempted more than 1.8 from deep per 36 minutes in any other season, per Basketball Reference. Could you imagine Hawes and Young taking that many threes under Collins?

Even their defense is specifically designed to force transition opportunities. Most teams play soft zones when defending pick and rolls, but the 76ers gamble in order to force steals. When teams run side pick and rolls, Philly doubles the ball-handler and has a third defender rotate over quickly to try to force a steal. Look at where Carter-Williams is positioned on this play against the Heat. 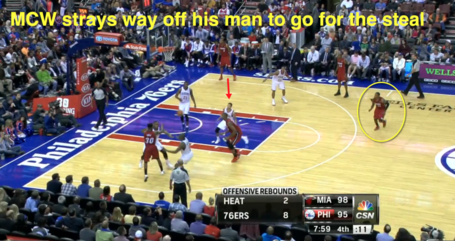 The 76ers are basically ignoring the shooters on the opposite side here, which makes them vulnerable to great ball movement. But if they get a steal or at least force wild passes 40 percent of the time, it's worth it to maintain their style. With Carter-Williams, Young and others, Philadelphia has the length to disrupt what are normally easy passes.

They also throw in all sorts of wacky defensive rotations when you least expect. Watch what Wroten and Darius Morris do here to force a turnover.

Here, Hollis Thompson and Turner switch assignments so Thompson can pressure a side pick and roll on one side, then switch again as the ball moves so Thompson gets a quicker path to contesting Mike Dunleavy's shot in the opposite corner.

The Bulls ended up corralling that offensive rebound, but that is exactly the kind of shot that can lead to a transition opportunity the other way. It's a corner three, sure, but it's well contested and caroms off the back rim nicely. If the 76ers can secure the board, they'll get a fast break.

All this pace seduces teams into a scrambled game. Teams can score on the 76ers — Miami rained threes, Washington got tons of fast breaks and the Bulls got tons of layups in the first half — but over time, they lose their discipline. This is a shot that Bradley Beal wouldn't usually take unless the game had been so up and down for two and a half quarters. 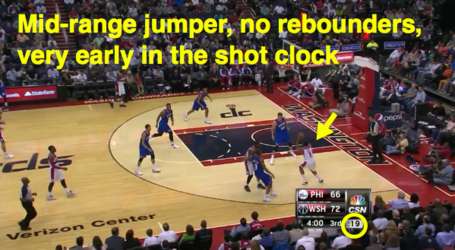 And this is a stunningly out of character attempt from Luol Deng. 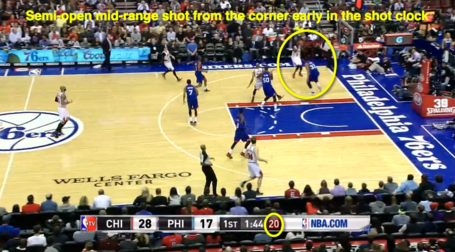 All this, plus Carter-Williams' brilliance, has the 76ers flying to a 3-0 start. The surprise element will soon wear off, and teams will eventually adjust to Philly's guerrilla tactics like they did when Charlotte raced to a 7-5 start last season. I wouldn't go printing those playoff tickets yet.

But big picture, this shows that Brett Brown is willing and able to be innovative to give his team the best chance to win. As the talent base is built up, that skill will be necessary to take the 76ers to the next level.

Why is Derrick Rose off to such a poor start? Rust, particularly on his floaters and layups, is one big reason. Aggressive traps, such as the ones we saw in last Tuesday's opener against the Heat, are another. His poor perimeter shooting is a huge piece of the puzzle, too; notice the hitch in his delivery on this wild fling, which causes the shot to have no arc on it.

But Rose also is putting himself in tough positions by breaking the offense too quickly to try to score. His struggles are surely making him anxious, but he needs to channel that more effectively.

This late-game turnover against the Knicks was a great example. The Bulls set up to run their Hawk series, which calls for one wing to come screen for the point guard on as another curls off a double screen on the opposite side. (Here's more on how this works.) Luol Deng was coming to screen for Rose as Kirk Hinrich prepared to run off two screens in this screenshot. 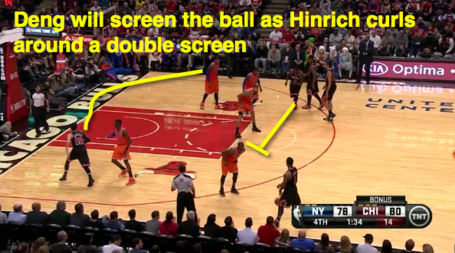 The Knicks defend the play well, but Rose still has options. He could find Deng in the low post, or he could keep dribbling towards the middle and maybe find Hinrich fading in the corner, since Tim Hardaway Jr. shot the gap. 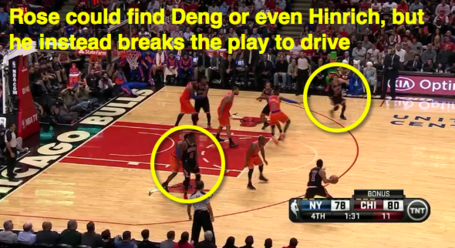 Instead, he crosses over to his left and tries to attack a driving lane that doesn't exist. Deng isn't ready for Rose to make his move, so he's caught inside the three-point line instead of giving Rose the spacing he needs. That makes it easy for Iman Shumpert to come over and force a turnover. 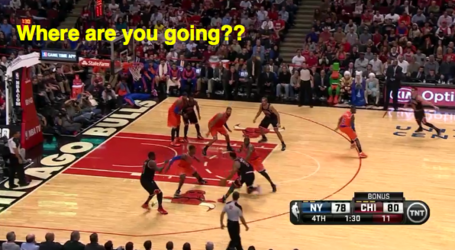 Rose will get better as the season moves along, but part of that development is understanding when to attack and when to pull back.

SACRIFICE OF THE WEEK

There are so many pieces to a play's puzzle that don't show up in the box score. We'll highlight one such piece each week in this section.

Nothing gets my hoop nerdom going more than a guard setting an off-ball screen to free a bigger player. You have to respect the little guy for sticking his nose in there and sacrificing himself for the good of the team. This brilliant maneuver by J.J. Barea to get Derrick Williams a dunk is one of the best back-screens I've seen in a while.

Williams should have bought Barea dinner for that one.

10 other observations from the week that was.