Life in the cellar: A dispatch from the bottom of the NBA

Both the Celtics and Jazz are planning for brighter days in a dreary present. Something had to give when the two winless teams met in Boston.

Share All sharing options for: Life in the cellar: A dispatch from the bottom of the NBA

BOSTON -- It was hard not to notice the tension that hung in the air at the Garden on Wednesday when the Utah Jazz came to town. This was not the feeling of old, when Kevin Garnett would work himself into a frenzy and the sellout crowd would follow his lead.

It was the opposite of that, right down to the first non-sellout since KG arrived in Boston. This was two winless teams trying mightily and often futilely to find something, anything, that would work. This was desperation.

Last summer, both the Celtics and Jazz made long-term plans that required short-term sacrifices. After sinking to a .500 record and a first round playoff loss, Danny Ainge traded Garnett and Paul Pierce and cut ties with Doc Rivers for a bevy of picks and players. Despite winning 43 games, the Jazz missed the postseason, and management let Al Jefferson and Paul Millsap walk while filling that cap space with veteran contracts and the promise of future first rounders. 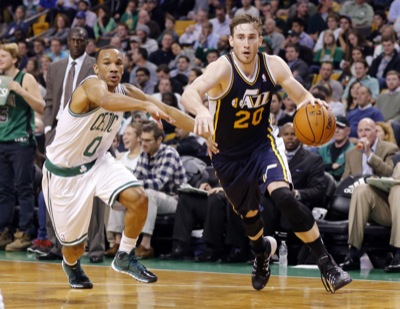 CELTICS BLOG: A moral and actual victory
SLC DUNK: When it rains, it pours

Both teams made their moves willingly, and all of it made sense. Yet it's always easier in theory than in practice to plan for the future, especially in a present where both teams lost their first four games.

"This team is not going to lay down," Utah coach Ty Corbin said before the game. "They need a win. We need a win. Somebody has to get a win tonight."

After 48 minutes of sloppy offense, head-shaking turnovers and porous defensive rotations, that seemed debatable. The Jazz started hot, ripping off a 16-3 lead, and then inexplicably gave it all back. By halftime, they were down 16 after scoring only eight points in the second quarter. The Celtics lead ballooned to 25 points, which they promptly coughed up before holding on for a 97-87 victory.

This is the downside of building for the future. Everyone involved understands the bigger picture. Everyone understands they have a job to do. But it doesn't make it any easier when you have to live through it. At some point, the process has to yield results, even just five games into a season that seems doomed from the start.

"This is where we are," Corbin said. "It's a young club, so we have to make sure that we keep working every day, regardless of what's going on. It is one of the fears that you have with a young group because they haven't been through it at this level before, because they don't know how to get over the hump. You have to do it as a group."

Corbin started three young players who are essentially the core of the rebuilding project and brought two more -- Alec Burks and rookie Rudy Gobert -- off the bench. In Gordon Hayward, Enes Kanter and Derrick Favors, there's potential top-line talent that the Celtics frankly don't have at the moment, but it's still young talent.

"Potential gets you in trouble. You need people that are going to give you results"-Richard Jefferson

"Potential gets you in trouble," said Utah forward Richard Jefferson, one of the handful of veterans still on the roster. "You need people that are going to give you results. I think our guys are getting baptized. We're learning very quickly and there's positives to everything."

Like Hayward, for example. With his team flailing, he took over in the second half and scored 20 of his 28 points. He demanded the ball and went to work, which is what the Jazz want him to do. While it was a positive step, the breakthrough is still out of reach, and there's nothing more hollow than a moral victory.

"It better be coming, or else I might lose it," Hayward said. "It's right there. It's the little things were not doing. It's the details we need to pay extreme focus to or else we're going to keep losing."

The Jazz have two more games left on their road trip that will take them to Chicago and Toronto on a back-to-back. It's not going to get any easier.

"It's a long year. We're in a bad stretch right now," Corbin said. "You know what? Nobody's going to feel sorry for us."

On the other side, Stevens tinkered with his lineup, starting Jordan Crawford in the backcourt mainly to let Avery Bradley play off the ball. He benched Vitor Faverani after a ragged six minutes and started Kelly Olynyk in the second half. He used Phil Pressey off the bench, and even Kris Humphries made an appearance.

By his own admission, he's searching for the right combinations. Stevens noted a lack of separation among his players, which is another way of saying he has a bunch of fourth and fifth options. "There's a lot of guys who can be in that sixth man role," Stevens said. "Right now we've got five of them"

"There's a lot of guys who can be in that sixth man role. Right now we've got five of them."-Brad Stevens on Boston's roster

The moves paid off, for one night at least. Gerald Wallace handled his demotion from the starting lineup like a pro, bringing energy and toughness off the bench. With Crawford and Pressey handling the ball, the Celtics kept their turnovers to a minimum. Despite the ragged start and frustrating finish, the Celtics looked like a functioning NBA team for long stretches of the game.

"Winning's more fun than losing," Stevens said. "But at the same time, I think we played two pretty-good games back-to-back, so that's the most positive thing moving forward. And hopefully we feel better about ourselves as we move forward."

It's all you can ask when you're living life at the bottom of the league.

• Why the Clippers can win the West | CP3 finally unleashed