What if I told you Wesley Matthews was the best shooter in the NBA? Here's the evidence.

Share All sharing options for: Wesley Matthews, the NBA's best shooter through 5 weeks

Entering this season, it felt like we knew Wesley Matthews. Four years into his career, the 27-year-old wing had set a nice baseline of performance for himself -- efficient scoring in the mid-teens, a few rebounds, a couple assists per game -- and it appeared he'd be a solid starter for a long while.

But when it came to Matthews' future, for someone already in his physical prime, you weren't expecting much more, were you? Unlike many young players who thrive early on, Matthews' progression felt astonishingly concise. By Year 2, Matthews was already a solid starting 2-guard. By the end of Year 4, he was very much the same player.

Over the summer, Matthews worked hard to become more polished. Upon arriving to training camp in October, he began talking up his plan to be a smarter, more effective version of the player he already was. "Never changed. Just the new version of the old me," Matthews wrote in a reporter's notebook during pre-game warmups prior to Portland's exhibition opener.

Well, folks, here's what the new version of old Matthews looks like, via NBA.com: 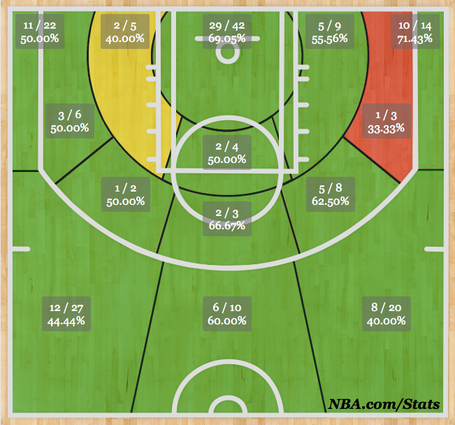 That, seriously, is the prettiest-looking shot chart in the NBA through roughly one-fifth of the season. Focusing on taking more three-pointers and fewer mid-range jumpers, Matthews has quickly become one of the most, if not the most, efficient perimeter scorers in the league.

After 16 games, Matthews leads the NBA in true shooting percentage and efficient FG percentage. In both statistics, he narrowly tops Atlanta's Kyle Korver, often referred to as one of the great pure shooters of this generation.

To be fair to Matthews, he was always a good shooter. Through four seasons, the 6'5 guard shot 40 percent on three-pointers and 44 percent overall, the former being especially impressive given the volume of shots taken beyond the arc.

But this season, he's taken those percentages to new levels. From three-point range, Matthews is hitting 51 percent of his shots while taking over six per game. He's also shooting an astonishing 61 percent on two-point shots, which puts him in the same territory as LeBron James during The King's latest historically-great campaign.

Logic permitting, any reasonable person should be able to recognize that a 16-game hot streak comes loaded with complications. Small sample sizes like this tend not to retain much predictability, allowing one to make some pretty absurd conclusions under the guise of statistical analysis.

But the thing with Matthews, more than most early-season breakout players, is the emerging pattern. Since Feb. 1, 2013, Matthews has shot 130-of-292 (45 percent) from beyond the arc and nearly 49 percent overall. That sample -- 46 games spanning a 10-month period -- signals pretty strongly that, going forward, Matthews could shoot closer to those marks than his old level of performance. When you dig a little deeper, this feels like an extension of the progress Matthews made last season rather than a brief surge in need of regression.

And for the Trail Blazers, that improvement has been seen across the offense. While we can't deny the benefits of replacing Eric Maynor, Luke Babbitt and J.J. Hickson with Mo Williams, Dorell Wright and Thomas Robinson, Portland doesn't become the league's fourth-best offense without the spacing provided by Matthews and Nicolas Batum on the wings. Because defenders need to hold strong at the three-point line to stop the barrage, it's created opportunities across the offense. You can't step away from Matthews or Batum or Damian Lillard, because they're knocking down threes nearly half the time they shoot 'em. It'd be a losing strategy to let those guys loose.

So while people sit around and wonder whether Portland can sustain this offensive eruption, I'll say yes, because of Matthews as much as anything. Over the past year, he's emerged as arguably the best shooter in the NBA, and it's fundamentally changed the Portland offense. As deadly as any team in the league from deep, it looks like a winning formula for the Blazers.

• The Nets’ near-collapse in Toronto