NBA scores: Rockets hold on to beat Spurs, Nets win on the road

Saturday was full of great NBA action, headlined by a Western Conference battle in San Antonio.

Share All sharing options for: NBA scores: Rockets hold on to beat Spurs, Nets win on the road

The long Thanksgiving four-day weekend is coming to an end, and if you were away spending time with your friends and family Saturday night, we weren't. The Houston Rockets and San Antonio Spurs played a down-to-the-wire game, Ricky Rubio blessed us with one of his wonderful passes, and so much more. Check it all out in our roundup:

San Antonio outscored Houston 34-26 in the third quarter, though, with 22 combined points coming from Tony Parker, Tim Duncan and Matt Bonner, and the Spurs were building momentum going into the fourth quarter. Marco Bellinelli drained back-to-back threes to open the final quarter and the Spurs were up five as the Rockets were crumbling on the road.

The team's exchanged buckets down the stretch, like this magical layup from Tony Parker:

But, neither side could pull away. San Antonio decided to run with the "Hack-a-Howard" strategy at the three minute mark and things got interesting. Not only did Howard make four of his six attempts while being intentionally fouled, but the referees awarded James Harden three free-throws after deciding he was in shooting motion from deep on one of the hack attempts.

Harden took over the fourth quarter, scoring 16 points in the final frame and five points in the final three minutes. San Antonio struggled to score down the stretch, and the game was sealed after Manu Ginobili took a questionable three-point attempt with the game on the line and 22 seconds remaining. The Rockets grabbed the rebound, the Spurs didn't foul and Chandler Parsons sealed the game after gathering an outlet pass from Harden:

Harden finished with a game-high 31 points. Chandler added in 26.

The Nets won? The Nets won! No coaching shenanigans involved here, Brooklyn led by as many as 15 points. Joe Johnson scored a game-high 26 points on 9-of-15 shooting, but let's not bury things that matter and cut to the chase.

If I told you Andray Blatche made three three's would you believe me? Probably not, so I brought evidence of his 20 points on 7-of-10 shooting night: 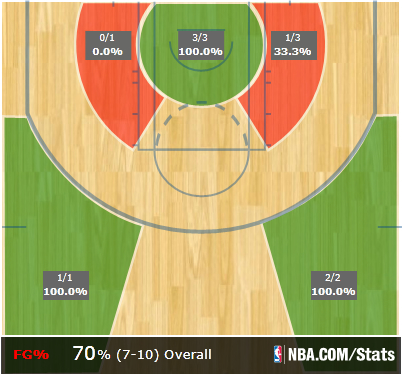 I promise that Jason Kidd wasn't allowed anywhere near the stat sheets to make that happen.

Ricky Rubio's rate of ridiculous ... alright I'm out of words that start with "R" to get this out, so here's what I was ramping up for:

(Credit to @cjzero, a wizard of the Internets)

What a beautiful dish to Kevin Love for one of his game-high 27 points. Love, Kevin Martin and Nikola Pekovic combined for 69 of the Wolves' 112 points. Dirk Nowitzki was lights out, shooting 10-of-13 for 23 points and Monta Ellis added in a team-high 26 while shooting 60 percent, but the Maverick's defense just couldn't hold up enough against the high-scoring Minnesota squad.

The Bucks picked up a win against the Celtics, which can be summed up in one singularly awesome GIF of Giannis Antetokounmpo's chase-down block and "State of Liberty" dunk on the other end:

"The Greek Freak" had a solid all-around game, finishing with 10 points, seven rebounds, four assists and one block in 27:45 minutes off the bench.

Sign me up for seeing more of that. O.J. Mayo scored a game-high 22 points for Milwaukee while Jared Sullinger finished with a team-high 21 points for Boston.

Cleveland led by as many as 15 points, but the Bulls outscored the Cavaliers 27-20 in the fourth quarter and fell just short of delivering another blow to Cleveland's shaky start of the season. Andrew Bynum had a "throwback" game, putting together a 20 point, 10 rebound, five block stat line that would make you think he found and/or invented a time machine.

Kyrie Irving scored 19 point on an inefficient 9-of-21 shooting. Luol Deng scored a game-high 27 points to go along with 11 assists.

John Wall and the Wizards bounced back after getting blown out by the Indiana Pacers in their last outing. Wall finished the game with 22 points, 12 assists, six rebounds and five steals. Martell Webster and Trevor Ariza more than made up for the absence of Bradley Beal, combining for 43 points on 10-of-16 shooting from deep.

The Jazz picked up their first road win and Trey Burke had the best game of his young NBA career. The rookie turned in 20 points. six rebounds and three assists in the victory. Just a day after losing to the Suns by 11 in Utah the Jazz struck back and had seven players who reached double-digit scoring.

• The Nets’ near-collapse in Toronto

NBA schedule: Rockets too much for Spurs in San Antonio