News on Lamar Odom's reported "when-not-if" signing with the Los Angeles Clippers and the Knicks' edict to stay positive.

Clippers coach Doc Rivers told NBA.com on Saturday that free agent forward Lamar Odom had spoken to Los Angeles with interest in rejoining his old squad, and Rivers even said he hoped that Odom would pick them. One day later, sources tell ESPN's Marc Stein that Odom landing with his old team is more of a "when-not-if" type of situation.

The when could come in a few weeks. Los Angeles plays the Indiana Pacers on Sunday before shipping off for a seven-game road trip that ends on Dec. 14. Stein reports that a signing of Odom is unlikely until the end of the season's longest trip away from Staples Center.

In 82 games with the Clippers last season, Odom averaged four points and 5.9 rebounds per game. He's shot below 40 percent in each of the last two seasons, has allegedly struggled with substance-abuse issues and is facing a DUI charge. Rivers, however, said Odom was in surprisingly good shape when he met with the forward in mid-November.

Clips Nation: More on the Clippers

Though the Clippers have Jared Dudley, Matt Barnes, Antawn Jamison and Blake Griffin to hold down the forward positions, the versatile Odom would provide an experienced insurance option at either forward spot.

A 3-12 record doesn't seem like a reason for positivity. But expressing frustration and playing the blame game hasn't worked, so the New York Knicks have no other choice but to be more positive.

Apparently, they've been instructed to look on the bright side. The New York Post believes that either general manager Steve Mills or owner James Dolan asked that the players and coaches stop with the negative approach -- it wasn't getting the Knicks anywhere.

The Knicks have lost eight straight to fall to 3-12 - second-worst in the East. But in the visitors' locker room in Denver late Friday night, they acted as if the storm's floodwaters receded and recovery was in motion following their 97-95 loss to the Nuggets.

The Knicks apparently see the fog lifting and despite more losses, have renewed spirits. Or at least, they're saying that's the case.

Knicks guard J.R. Smith admitted to Long Island Newsday that his knee that underwent surgery over the summer has been bothering him of late.

"I got to play better," he said. "If it's hurting that bad, I shouldn't be playing. I'm out there trying to give all that I got.

Posting and Toasting: More on the Knicks

Smith has played 10 games and more than 31 minutes per game. The reigning Sixth Man of the Year is averaging 11.7 points but is shooting a miserable 32.8 percent from the field.

Former Memphis coach Hollins wants back in the NBA

Lionel Hollins' falling out with the new Memphis Grizzlies higher-ups led to the end of his tenure despite the coach's role in the team winning 56 games last season. But while he's enjoyed his time off since, Hollins told ESPN's Ramona Shelburne that he'd like to earn himself another NBA head coaching gig.

Hollins also admitted he turned down a chance to become an assistant coach with Maurice Cheeks' staff in Detroit.

He told ESPN he's enjoyed watching different styles of basketball during his time off, and that has led him to search for an identity as a coach who can play to a roster's strengths. While Memphis' grinding, slow-paced style fit its exceptional big men, Hollins wants to be viewed as a versatile coach whose ability is not tied to the Grizzles' style alone.

Los Angeles will be without starting shooting guard J.J. Redick for six to eight weeks after he broke a bone in his hand and tore his ulnar collateral ligament in the same wrist. ESPN's Arash Markazi reports the timeline for Redick's return could be more toward the eight weeks, meaning his replacement, Willie Green, will have a good while to familiarize himself with the starting lineup.

Meanwhile, the Clippers will also be missing swingman Matt Barnes. A retinal tear suffered nearly two weeks ago will keep the forward out for the next two weeks.

The good news: Chris Paul's absence because of a hamstring strain will end at one game. He returned Sunday against the Indiana Pacers. 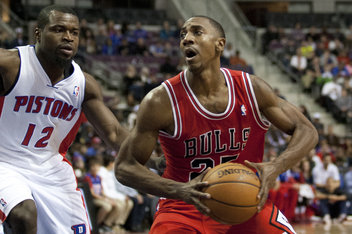 How bad has Marquis Teague been playing?

In the wake of Derrick Rose's torn meniscus injury, the Chicago Bulls have been forced to slide Kirk Hinrich to the starting point guard spot, where he's capable enough. The bigger issue has been who backs Hinrich up.

Tom Thibodeau has an answer, and his name is Mike James. The 38-year-old point guard officially has slid ahead of Marquis Teague in the rotations, the Bulls coach told K.C. Johnson of the Chicago Tribune. After struggling especially on the defensive end of the floor, Teague was a hot name in trade rumors last season, his first in the league.

James had two assists and four personal fouls in his 13 minutes behind Hinrich on Saturday in a 97-93 loss to the Cleveland Cavaliers.