Andre Drummond has 31 points, 19 rebounds and 6 steals in Pistons win

The second-year center put it to the Philadelphia 76ers.

Share All sharing options for: Andre Drummond has 31 points, 19 rebounds and 6 steals in Pistons win

A lot of things went right for the Detroit Pistons in a 115-100 rout of the Philadelphia 76ers on Sunday, but it's hard to overlook the performance put on by center Andre Drummond. The second-year pro and Detroit's first-round pick in the 2012 draft tallied career highs of 31 points, 19 rebounds and six steals.

Andre Drummond checks out with 31 pts, 19 reb and 6 stls, the first player to post those numbers in one game since Hakeem Olajuwon in 1990.

It didn't help that the Sixers didn't seem willing to play a lick of defense on the big man. Drummond, who is averaging 12 points, 11.8 rebounds and 1.2 blocks per game this year, went 12-for-15 from the floor. This is what his shot chart looked like. 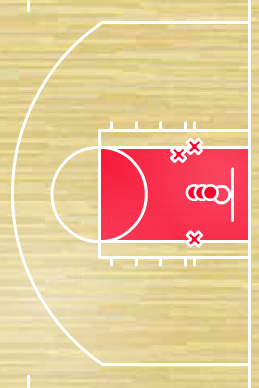 And this is how he made one of those shots close to the rim.

Drummond played 33 minutes in the victory Sunday but was pulled late in the fourth quarter a rebound away from joining somewhat rare company.