Why playing Dwight Howard and Omer Asik together didn't work

No one's shocked the Rockets couldn't find a way to play Dwight Howard and Omer Asik together. Here's how bad the experiment went and the surprise solution Houston found in the process.

Share All sharing options for: Why playing Dwight Howard and Omer Asik together didn't work

The Houston Rockets knew what they were getting into when they signed Dwight Howard this summer. A year removed from plucking Omer Asik away from the Chicago Bulls, Daryl Morey managed to land an impact center for the second straight offseason. The Rockets had a chance to land the most coveted free agent of the summer to partner with James Harden and weren't going to shy away because Asik was coming off a career year. 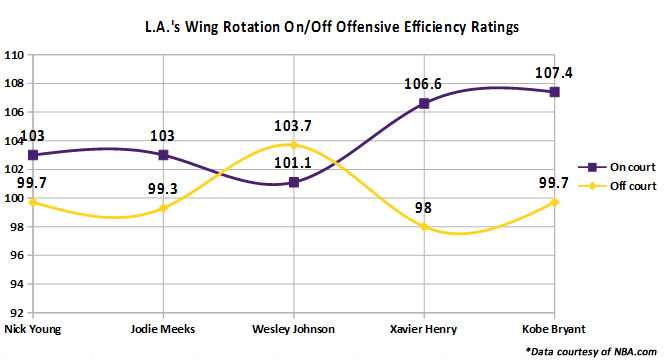 Kevin McHale and Morey both said they'd give the Howard-Asik frontcourt a chance, electing to play their "best" talent instead of players that fit. But it took them just 93 minutes over eight of the Rockets' 22 games for them to pull the plug and never look back. The experiment failed miserably and no one should be surprised the Rockets have reportedly spoken with multiple teams about dealing Asik.

They were never going to be an ideal pairing, but the numbers are incredibly damning. Here's a look at the Rockets' team averages in comparison to lineups featuring both big men: 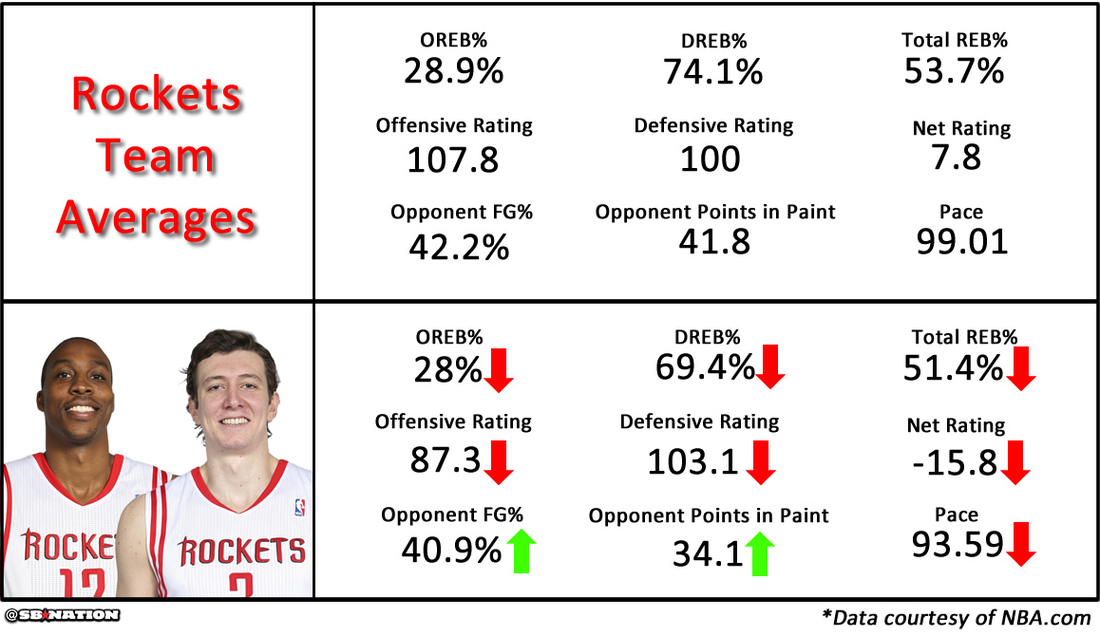 As expected, Houston couldn't find a way to make their offense work with two space-clogging big men. The Rockets averaged a lowly 87.3 points per 100 possessions while they Asik and Howard were on the floor together. That's a 20.5 points per 100 possessions drop from their team average. Houston also had to play at a slower pace with two seven-footers moving up the court, which stifled their transition offense and increased the degree of difficulty in finding a quality shot.

Worse, despite having two elite glass cleaners, the Rockets were actually grabbing a smaller percentage of available rebounds. This was an area Houston needed the duo to excel in to make a case for the "Twin Tower" lineup.

The only two areas that looks like the Rockets had an "advantage" in when the two played together were opponent field goal percentage and points allowed in the paint, but despite this, they allowed 3.1 points more per 100 possessions then the team's average overall. Any "advantage" gained in those two areas was negated by other issues.

The Rockets were not succeeding by any advanced metric and were fighting an uphill battle to make up deficits when the two did not share the court. It's clear why they aborted the mission of playing the two together.

But how have they done when separated? Quite well, actually.

First, we'll take a look at the Howard's individual statistics, along with Houston's offensive and defensive ratings, when Asik is on and off the court: 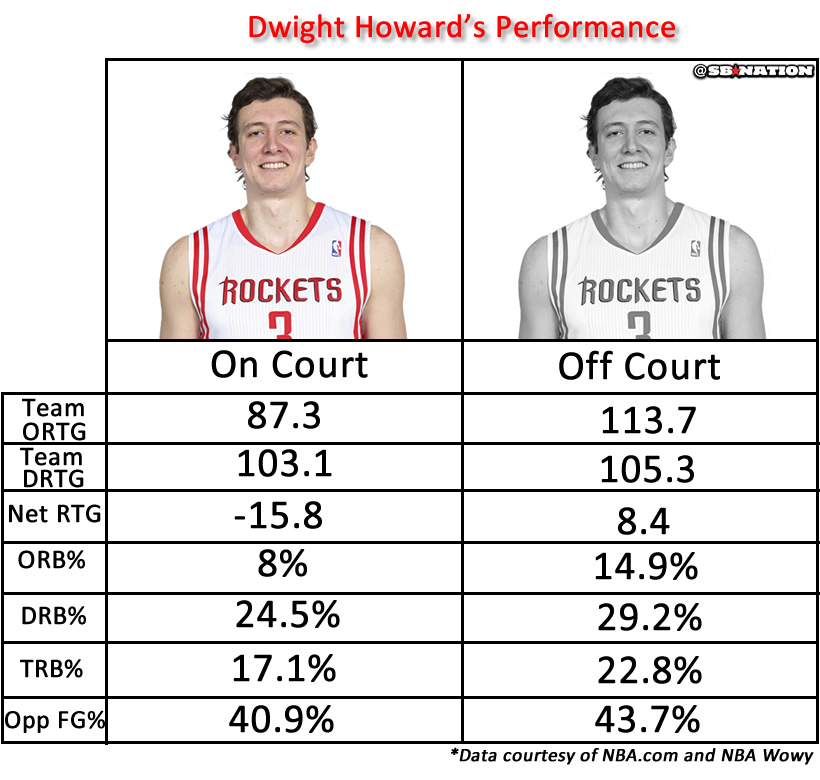 The Rockets' offense averages 26.4 points per 100 possessions more when Howard is playing without Asik, leaping up to a staggering 113.7 points per possession. The defensive efficiency numbers drop slightly, but his individual rebounding numbers all receive a bump in percentage.

Overall, the defense shows a small change while the offense significantly improves. Playing Howard without Asik yields a 24.2 points per 100 possession differential. For a front office engrossed in analytics, that surely became a figure too large to ignore. Howard shows clear positive results playing as the lone true center in the Rockets' lineup.

But will the same be true for Asik? Here's a look at Asik's numbers with and without Howard: 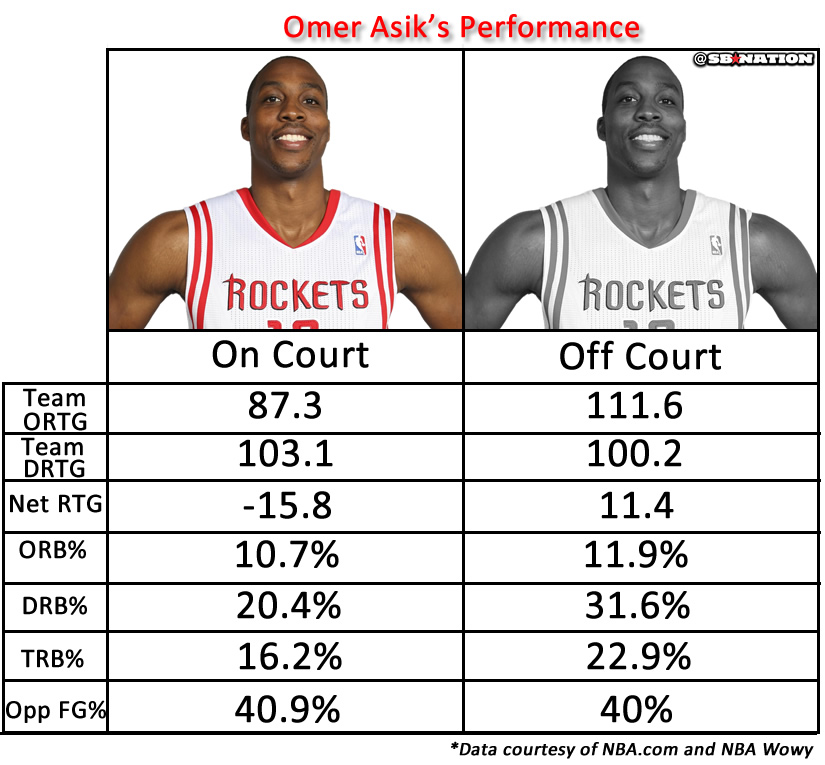 The Rockets average 24.3 points per 100 possessions more on offense when Asik is playing without Howard, showing the team is more than capable of playing with one traditional center, but can't overcome the obstacle of playing two. What's surprising is the defense actually holds teams to 2.9 points per 100 possessions less when Asik is the defensive anchor instead of Howard.

Some of this can be attributed to Asik playing against more reserves, since he isn't in the starting lineup. But it's no secret that he, too, is an elite defensive center after all and deserves credit for his work on that end. The team had a defensive rating of 101.3 when Asik was on the floor last season, reinforcing the fact he's one of the best defensive big men in the league.

Comparing the numbers from when Asik is on and off the court with Howard also reveals how they diminish each other's rebounding prowess. Both players see boosts in rebounding percentage when split, but Asik's improved rebounding numbers are significant. When he's rounding up rebounds without Howard, his defensive and total rebound percentages are equivalent to being the best in the league, per Basketball-References rankings.

Both Howard and Asik are performing exceptionally when apart, but when you put them together, it's a disaster. The Rockets are pushing to be title contenders with Howard and Harden leading the way, and Asik, arguably their third-best player overall, is averaging a career-low 10.6 minutes per game. All Morey has to do is go out and trade him for a power forward now, right? 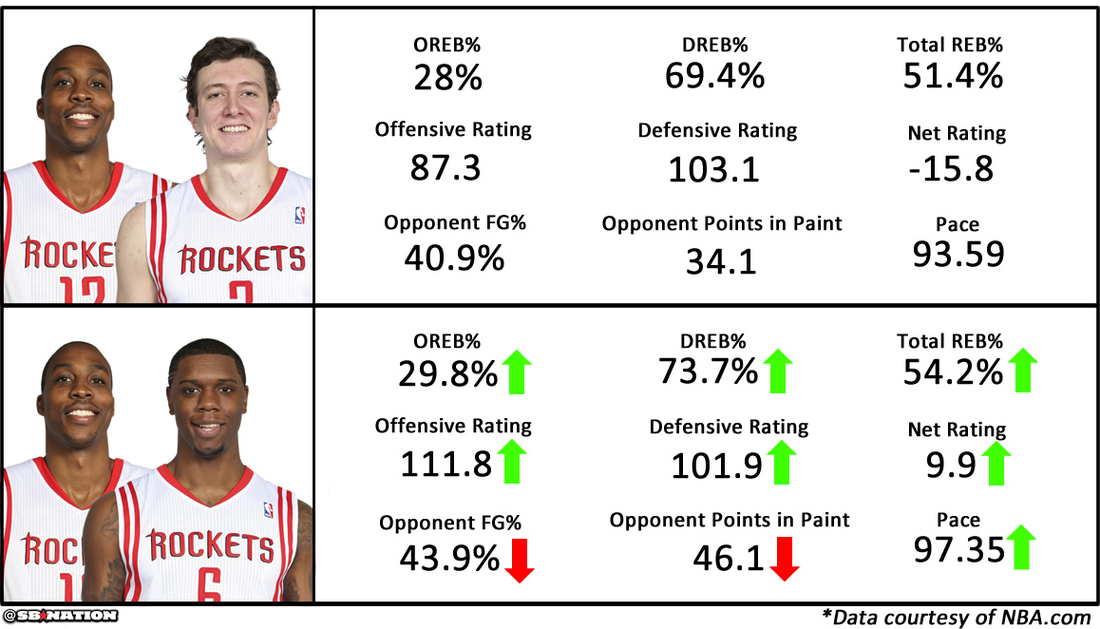 Jones' mix of skill and athleticism has given the Rockets a formidable partner to play next to Howard. The team's rebounding percentages, defensive and offensive rating and pace all show improvement with Jones on the floor next to Howard. In particular, the team's offense skyrockets, showing a 24.5 points per 100 possession increase.

Jones, the Rockets 2012 first-round draft selection, turns 22 this season and still has room to grow. He was a five-star recruit in high school, and Scout.com ranked him eighth in the 2010 recruiting class led by Harrison Barnes and Kyrie Irving. The Rockets don't need him to be a star, but if he can continue producing alongside Howard, Houston may have found their answer in-house and won't need to give up a valuable asset in Asik to find an immediate fix at power forward.

Jones' sudden rise is key for Houston because of his ability to space the floor from mid-range to beyond the arc. He's shooting 40.6 percent from deep on 1.7 attempts per game. How has that affected Houston's offense? A quick glance at the shot charts produced from two-man lineups featuring Howard and Asik compared to Howard and Jones shows the drastic change: 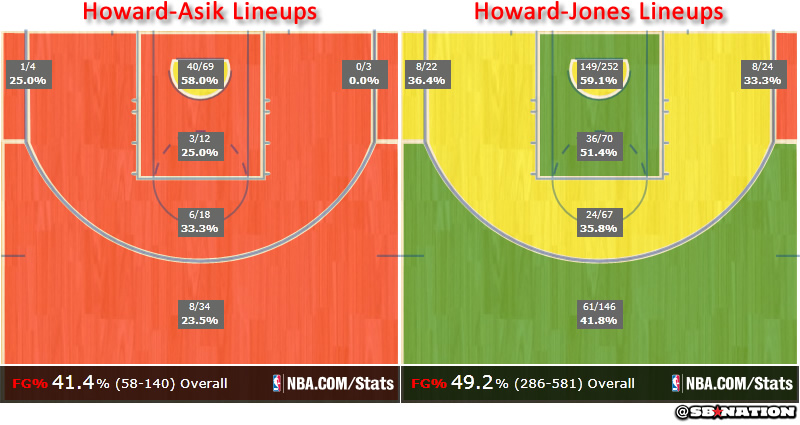 What's next for Houston? On Dec. 15, all trade restrictions from players who were signed as free agents this summer will be lifted. The latest rumors suggest Asik will be traded shortly after that because he is not happy in Houston. However, Morey went from being cornered into needing a power forward to having options to sort through. He can accept many different types of trade packages back and can even deal Asik for a future asset like a first-round pick. Morey has a proven track record of managing his assets well, so this is great news for Rockets fans.

What's certain? Howard and Asik did not work and will not work, and it doesn't really matter assuming Jones can continue his strong play.

The NBA's best "two-man" lineups (limited to one per team), according to NBA.com:

The NBA's worst "two-man" lineups (limited to one per team), according to NBA.com: