Q&A: Matt Bonner on baby carrots, concerts and the Spurs

San Antonio Spurs forward Matt Bonner talked to SB Nation about all sorts of stuff, very little of which actually had to do with basketball.

Share All sharing options for: Q&A: Matt Bonner on baby carrots, concerts and the Spurs

TORONTO -- Matt Bonner checked into Tuesday's game with it well out of reach, his San Antonio Spurs leading the Toronto Raptors by 21 points with under seven minutes to play in the fourth quarter. The public address announcer spoke his name to a chorus of cheers as loud as any heard all night.

Bonner is in his eighth year with San Antonio after two years as a backup with the Raptors, and he's been greeted this way every time he's returned to Canada. Why is he such a folk hero, so beloved in Toronto?

He's a weirdo ... that's why we love him-Gregg Popovich on Matt Bonner

"He's a weirdo," Spurs coach Gregg Popovich said. "Matty's Matty. He's a lumberjack from New Hampshire. He's like the dweeb, egghead kind of guy. Highly intelligent, great sense of humor, well-read. Coach can't understand what he's saying half the time. He always has questions and you don't even know how to answer ‘em. That's why we love him."

Part of it is that the love in Toronto is mutual. It's where Bonner's wife is from, and he can be spotted around town every summer. He was known for taking public transportation to games when he was a Raptor and still calls Toronto his favorite NBA city, saying he's honoured -- yes, Bonner spelled out the O-U-R -- by the reception he continues to receive.

The other part? He's always seemed like a regular dude who made himself into one of the best shooters on the planet. He's the guy who, in the middle of a pregame stretch, asked a San Antonio beat writer if he had a chance to visit a Tim Horton's in Toronto. Bonner is a fan of Timbits, the buffalo chicken snack wrap and the iced capp.

He's the guy who you can watch making a sandwich for Tas Melas of The Starters or doing improv as his alter ego, Coach B. Bonner recently took teammate Patty Mills to see Arcade Fire. He's the guy who says, when meeting a legend at All-Star Weekend, that the coolest part is telling his dad and his dad's friends about the meeting since the old men flip out like little kids. Bonner's the guy you'd just like to hang out and joke around with.

Before the game against the Raptors, he discussed a wide variety of topics:

How did you become a baby carrot spokesperson?

It was a bit of a random occurrence in that I had a friend who happened to be one of the musicians on the whole Shakedowns Texas advertising product launch campaign. He actually went to San Antonio to do some press, and it occurred to him. "Hey, I have a good friend who's from San Antonio and plays for the Spurs, this is a Texas-based ad campaign, he has red hair, orange hair, it's baby carrots." The lightbulb went off. He called the advertising company and they called the corporation, Bolthouse, and they were like, "Yeah, let's do it."

It happened very quickly. Like in one night. I just met up with him for dinner or something and he brought it to me. We had a phone call. By the time I left that night he's like, "Alright, two days from now we're going to do this." 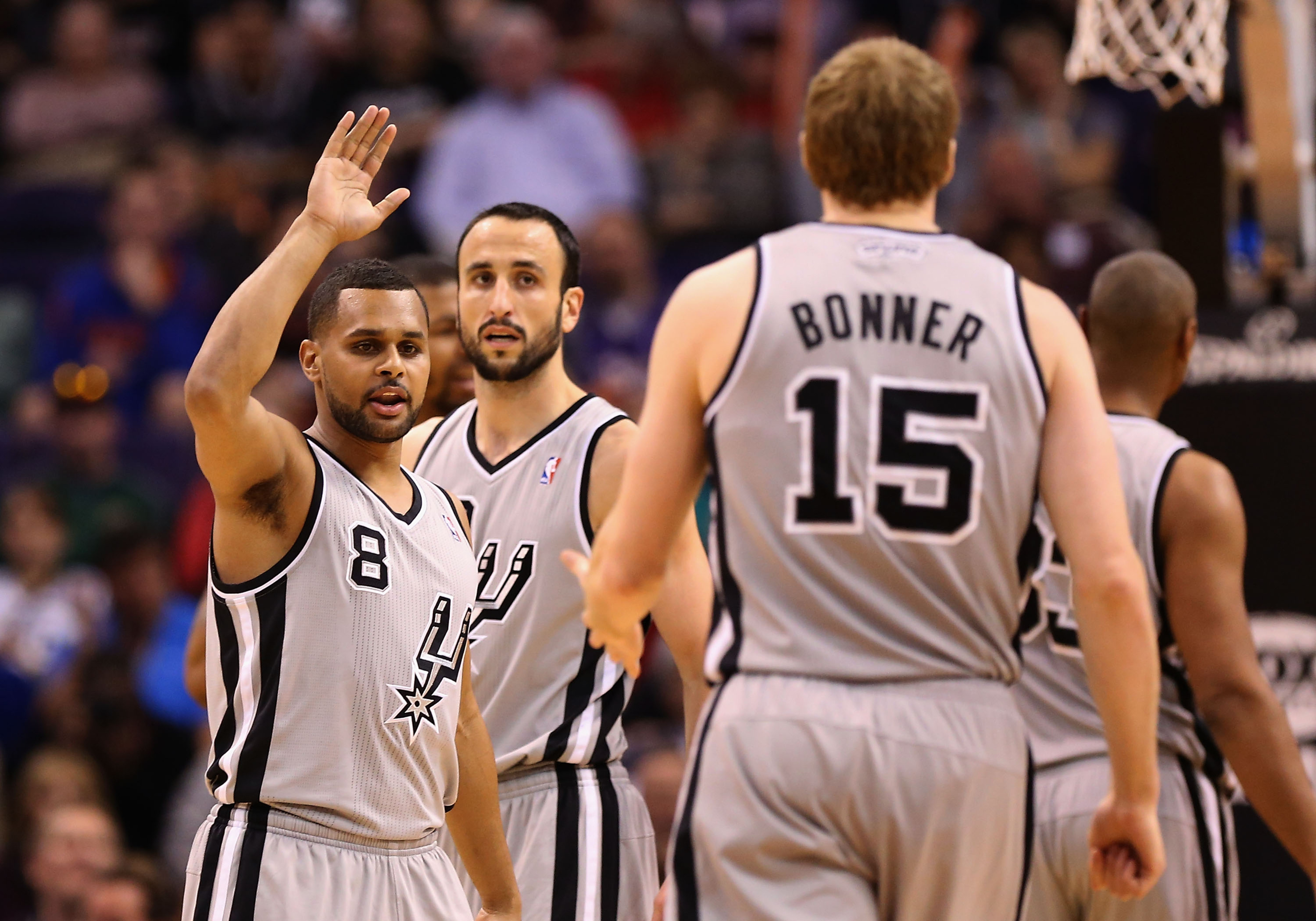 First of all, he's a ranga, that's what Australians call him and that's what we all call him now. I've passed it on. No, look, a great guy, really intelligent, loves to laugh, loves a joke. And great to hang out with, great to talk with him about stuff outside of basketball, whether it's business, whether it's music or anything. He's a great music guy and I am, too, so we get along well that way, going to concerts and whatnot. But just a really down to earth, laid-back guy that you just love spending time with.

Is it true that you observed Brent Barry at a Rick Ross show?

I did. It was an experience I had to take in. It was one of those situations where time slowed down to like a crawl. It was just like, "Eeeeveeeeerydaaaaay I'm hussstliiiiiin'." Brent Barry's standing there. It was incredible.

It was actually for the NBPA party at All-Star Weekend, I don't know how many years ago. But traditionally the players association throws a gala/party and they bring in entertainment. And at that moment, performing onstage was Rick Ross.

My conscience tells me to go to the back because I feel bad that people behind me can't see. But sometimes, if I'm really into it, I gotta get closer. And I'll go and stand there and after a few minutes if I turn around there's just like a part, a gap behind me. Like an aisle. But then it provides people a way to access the back and the front, so those are some benefits to it.

Your rookie season, you had Vince Carter on the team for a couple of months before he was traded and you also have had Jalen Rose as a teammate. What memories stand out from that time?

My rookie season, I remember I had played summer league the year before. I went to Europe and while I was playing in Italy, Kevin O'Neill and Glen Grunwald got fired. So then Sam Mitchell and Rob Babcock came in. I came back and the Raptors still had my rights and started from scratch.

I just remember being so focused to make the team that I was oblivious to anything. I just worked so hard to get ready for summer league, play summer league, and then right into getting ready for training camp. And the same thing during preseason. Then even once the season started I had a minimum unguaranteed contract, so I could never relax. My mindset was I have to do everything possible to make it. That, compared with [now], there wasn't social media, you couldn't go on your iPhone on the bus and look up what the stories are or anything. Not that I would do much anyway. I was really just, like, blinders on.

To be under Donyell Marshall's wing, that was a guy I looked up to growing up [when he was] playing at UConn, being from New England. And guys like Vince Carter, people I grew up watching, that was just so exciting that I didn't I guess have the capacity to care about much else.

What advice would you give to your rookie self?

This is going to sound weird, but maybe focus more on recovery stuff. Focus more on massage and not beat up my body as much as I did early on, ‘cause I just wanted to outwork everybody and do everything I could. And sometimes I probably went a bit overboard on my body. Just take it a little more easy on the physical side of things.

Outside of Tim Duncan, Tony Parker and Manu Ginobili, you've been on this team longer than anyone. What's the secret to sticking with this franchise?

I have no idea. I consider myself really lucky. I've gotten to be around something that's rarely seen in professional sports, with Tim, Tony and Manu playing at the level they have for so many years together. And to just kind of be a sidenote in that has been a privilege. 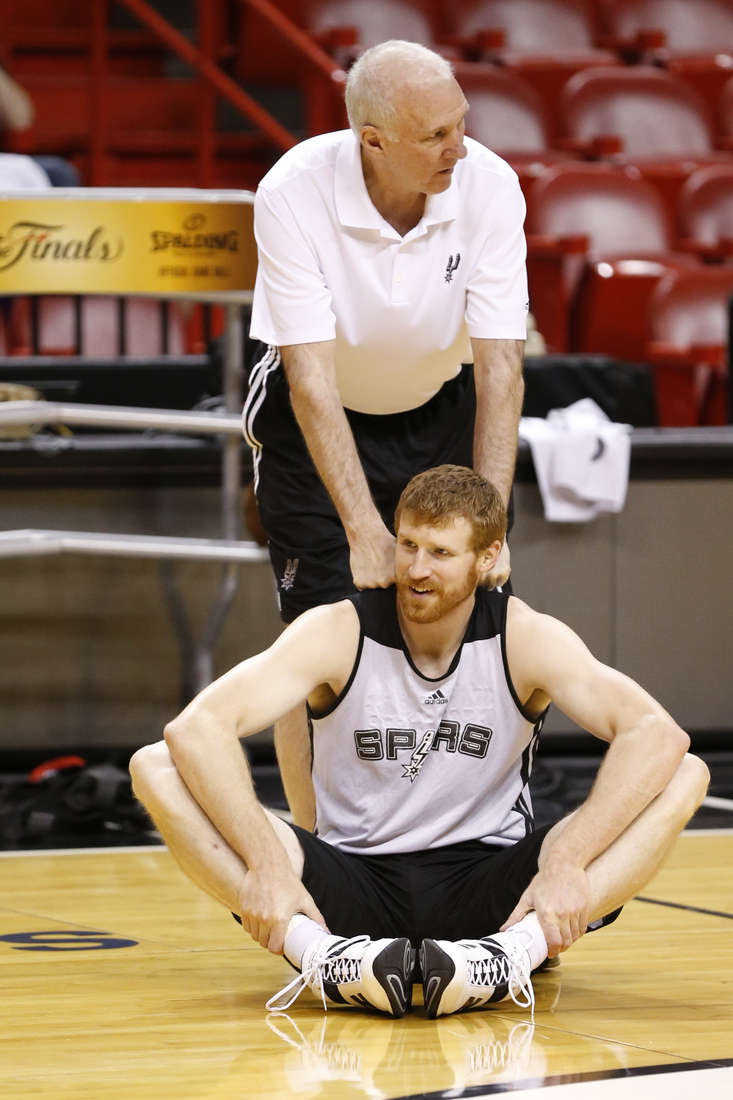 Everyone knows one side of coach Popovich from TV interviews and seeing him on the sideline, but what's it like to spend time with him away from the court?

It's awesome, he's a really smart, worldly guy. He knows a lot about many subjects outside the sport of basketball, whether it's politics or books or whatever. It's always fun to be able to pick his brain and learn from his worldly knowledge.

Reading anything at the moment?

Right now I'm reading The Grapes of Wrath. I never realized "Ghost of Tom Joad" by Bruce Springsteen was based on the main character, so I was pretty excited when I got to Chapter 2 and discovered that.

Was your joint birthday party with Stephen Jackson the best birthday you ever had?

Absolutely. Yup. I mean, anyone who has like a top-25 list of random things, just the fact that we have the same birthday and somehow in however many parallel universes there are, in this one we somehow came together, became friends and had our birthday party together. That was awesome.