Realigning the NBA: 5 ideas for removing or improving divisions

Even commissioner-in-waiting Adam Silver thinks we might need to rethink the current division setup. Here are five ways we could realign the NBA.

Share All sharing options for: Realigning the NBA: 5 ideas for removing or improving divisions

We're about a quarter through the NBA season, and to this point, the conference and division standings barely make sense. Two of the 15 Eastern Conference teams have winning records, compared to nine in the West. That basic outlook is enough for incoming commissioner Adam Silver to question whether the NBA's scheduling and standings formats are keepers.

Silver went on the Sirius XM NBA channel and said what we've all been thinking.

"Obviously historically, based on geography in terms of weighted schedule and convenience of travel, the goal was to enhance rivalries and I'm not sure if that's still what's happening and so that's something I'm sure that the competition committee, when it next meets, will be taking a fresh look at," Silver said. 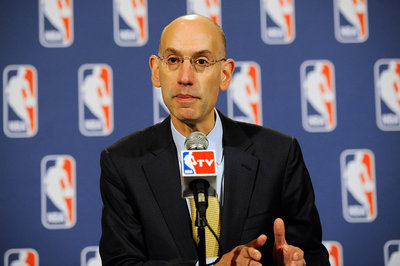 Such a change would be a baby step, but it could certainly be an improvement.

As of now, the two conferences are divided into three divisions. In the playoffs, three of the top four seeds in each conference are filled by the regular-season division winners. The fourth team in has the best record after those three are off the board. Those four teams are seeded in terms of record, and the final four playoff spots in each conference are likewise filled in order of record.

Silver is on the right track to openly discuss change, but many options are possible.

How often do you really look at the division standings? Never. Do they matter very much? Nay.

Yet, divisions do mess things up. A division winner is guaranteed a top-four seed under the current format. As it is, the 10-14 Boston Celtics lead the Atlantic Division and would earn the fourth seed despite several teams -- in the Heat's Southeast Division and the Pacers' Central Division -- having better records.

The NBA could completely cut divisions and seed the two conferences based purely by record, removing this problem. It'd look something like this. 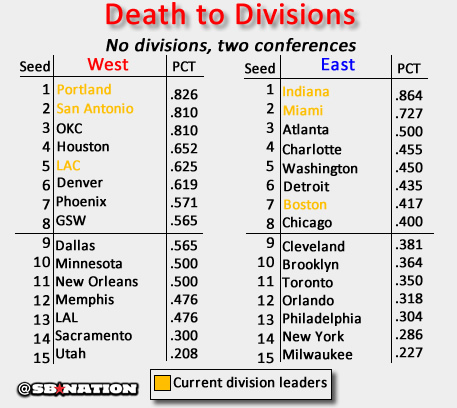 However, the major issue this season, even if it's considered a fluke, wouldn't be solved. The top-heavy Eastern Conference would still put losing teams in the postseason, and decent-enough Western Conference teams would be left out.

Lottery-wise, it also doesn't make much sense. How do Eastern Conference squads treading the wheel of mediocrity change their fortunes for the better, and to get there, for the worse?

That's more like it. Cutting conference affiliation and going with a straight 16-team playoff bracket would allow the best teams to earn the easiest trip to the NBA Finals during the regular season. It'll also make both the regular season and the early playoff rounds more competitive. 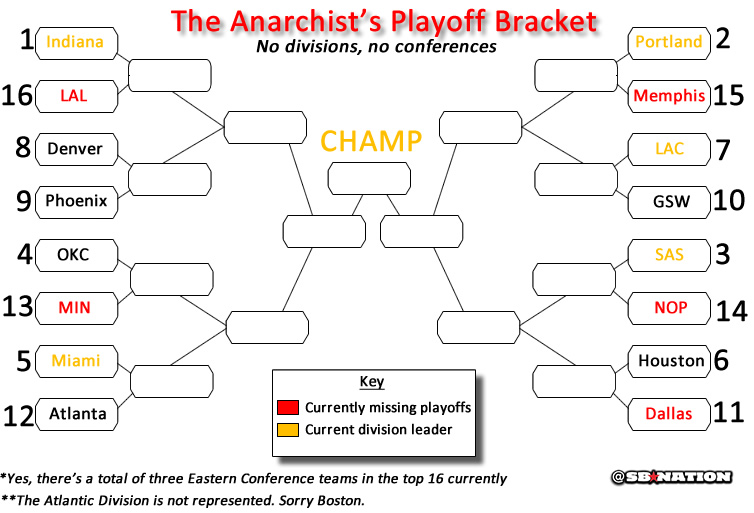 Under the current format, Indiana and Miami seemingly won't have much resistance to play each other in the Eastern Conference finals, whereas the best teams in the West risk wear and tear, and even upset bids, trying to get to their own conference finals. However, if we implemented the free-for-all format, Miami wouldn't be lolly-gagging in the regular season knowing it'll get a top-two seed no matter what happens. The Heat have the fifth-best record in the league and would be fighting just to get homecourt advantage in the first round. The stakes are raised. Maybe we'd get more out of Mario Chalmers in the regular season!

But like anything, there are negatives. Divisions are crucial to the current scheduling format. Currently, teams play all their division foes four times per season, and they play squads from the other conference twice. An NBA team will play teams within the conference and out of the division either three or four times.

Keeping the schedule regionally decided doesn't make sense if teams in different regions are playing different opponents and without some sort of random draw.

Keep divisions but with weighted schedules

What if we went the other way? What if we emphasize the reasons divisions should exist instead of making them even less important?

Rivalries are fun, but they can be done right. Like baseball, the NBA could really put the microscope on regional rivalries by scheduling teams to have eight games each against division foes, then two games each against the other 25 teams, as Steve Aschburner suggests on NBA.com. 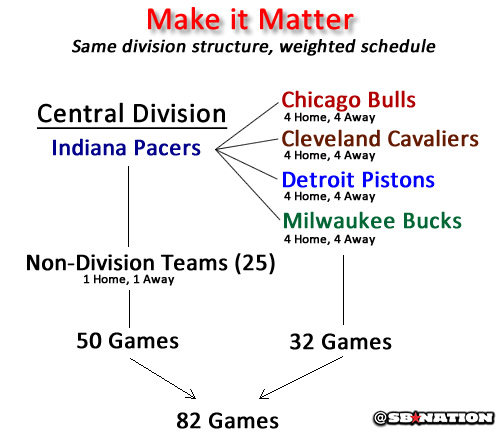 Obviously, adding more regional games takes away from the traditional powerhouse opportunities. Indiana and Miami, for example, would meet just twice. Then again, such a change could make those games that much more anticipated.

What if we kept the same general schedule, but otherwise removed any impact on divisions? What if the Atlantic-leading Celtics still were a 7 seed despite winning the division? In addition, what if the draft lottery just took the 14 worst records instead of the 14 non-playoff teams?

The draft lottery would also be more fair and theoretically even the playing field in the East. This season, Eastern Conference teams' records would be worse than their current winning percentage because they'd be playing out west more often. As of Dec. 9, the the Western Conference was winning 68 percent of its games against Eastern Conference teams, according to Business Week. So, an eight-seeded Eastern Conference squad without a chance in the first round under the current system would suddenly have a shot at moving into the top-14 picks under this change.

If all of the above is too rash of a change, we could even simply go back to having just two divisions each, like in the old days. This would limit the wonkiness atop the playoff seedings while keeping teams scheduled by their regions.

Very rarely do we come across a strong division with more than two elite squads or one as poor at this year's Atlantic Division. With two and not three divisions, the top two seeds could be decided by division, keeping it important to play for a division title. If the top two teams were from the same division, there's more room for error compared to the three-division format.

The division format hasn't aged well and seems of little consequence as is. The consequences of it, when they do occur, feel random to the teams burned by them more than an advantage to the teams they're supposed to help. Silver is right in wanting to discuss change, but the fix is far from clear.

All graphics by Andrew Garrison.