Pau Gasol is struggling in the final year of his contract with the Los Angeles Lakers and pinned some of his troubles on how head coach Mike D'Antoni isn't playing to his strengths on offense. D'Antoni has responded to the quote, calling Gasol's remarks "a nice excuse not to play hard,"  and that he had no trouble "getting up to the paystub line," reports Mark Medina of the Los Angeles Daily News:

"It's also a nice excuse not to play hard," D'Antoni said. "That's a classic, ‘I don't know what I'm supposed to do.' Well, you don't have trouble getting up to the paystub line. You know what you need to do to get your check. You know what to do. They will. They'll figure it out."

"That's one thing. They don't want to do it that way. I understand that. That's when you have to accept it or not. But there's no reason not to play hard."

Pau Gasol had the worst season of his career last year. A detailed, and revealing, chronicle of his 2012-2013 season with the Lakers.

Memphis return could be appealing

Pau Gasol only holds a card or two to his future, but he told NBA.com a return to Memphis could work.

Reviewing his nightmare season Memphis return could be appealing

D'Antoni's response is pointed and is just one of many incidents between them since he became coach of the Lakers last season. D'Antoni benched Gasol in the fourth quarters of multiple games early last season until the big man took time off while dealing with tendonitis in each of his knees, made Gasol a reserve when he returned to the active roster, and had a one-on-one dinner with the power forward in an attempt to get on the same page. Eventually, Gasol spoke with former Los Angeles Times columnist T.J. Simers about the possibility of asking for a fresh start away from Los Angeles if things continued to go poorly.

Gasol has been open about his impending free agency recently, first revealing that he had not spoken with the franchise about a contract extension after Kobe Bryant signed a two-year, $48.5 million extension, and later making it clear his goal is to prove to both the Lakers and other teams that he can still be an impact player. He's also called a return to Memphis this summer an "appealing" scenario if it presents itself.

Gasol is averaging 14.4 points and 9.5 rebounds per game. He's started in all 21 of the Lakers' games this season. His field goal percentage has dropped in each of his last four seasons in Los Angeles and he is currently on course for a career-low 41.7 percent from the field. As recently as the 2010-11 season, he was shooting 52.9 percent overall. Here's a look at the steady decline: 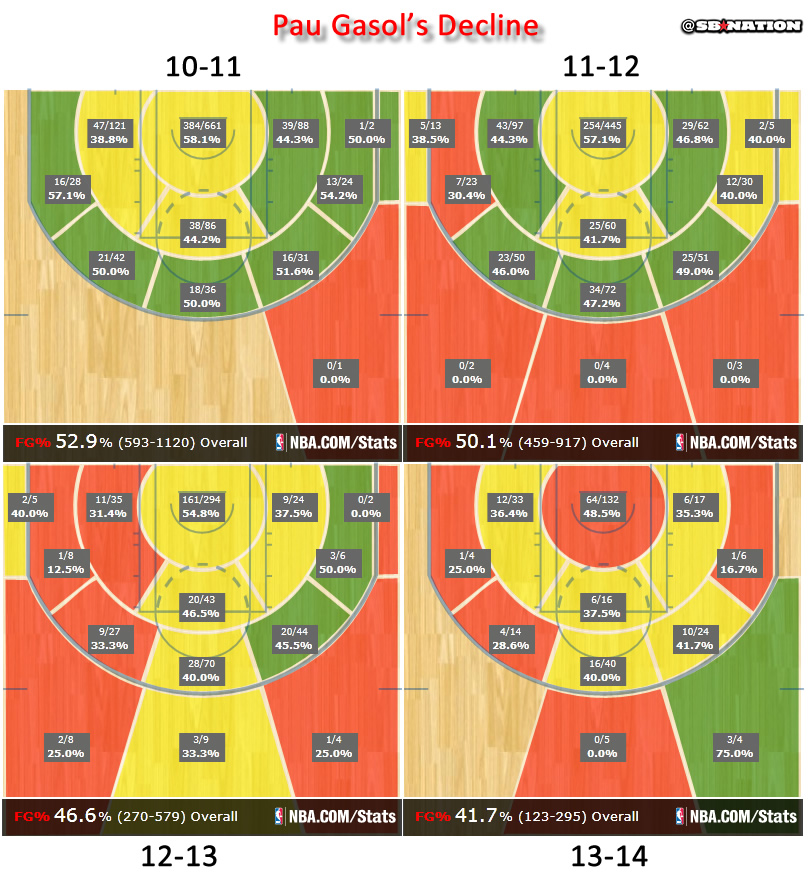 Gasol's $19 million contract will expire this summer, making him a 34-year-old unrestricted free agent. Gasol's future with the organization appears uncertain with the Lakers committing a huge portion of their salary space to retaining Kobe Bryant, something Gasol acknowledged during his exit interview after the San Antonio Spurs swept the Lakers in the first round of the Western Conference playoffs.

• Deeks: The NBA's trade season is about to start