The Wizards big man wants to "clear things up" about his role in the team's offense, but how big of an issue is it?

Share All sharing options for: Marcin Gortat unhappy about role in Wizards offense

Washington Wizards center Marcin Gortat is uncomfortable with his role in the team's offense and said he will talk with head coach Randy Wittman to "clear things up" after their loss to the Los Angeles Clippers Saturday night, reports J. Michael of Comcast Sportsnet Washington:

"I just don't like the position I play. I'm constantly drifting more and more away from the basket. Quite honestly, that's not my game. I'm capable of making or two plays like that but I feel more comfortable underneath the basket," Gortat said. "I just got to talk to coach and clear things up. Just make sure we're on the same page."

Gortat struggled against the Clippers, going 3-10 from the field and missing six shots away from the restricted area. He became hesitant to even attempt a wide-open baseline jumper and instead tried forcing the ball into the paint, causing a turnover:

Gortat is having a solid first year in Washington, averaging 13.1 points on 53.9 percent shooting on a career-high 34.4 minutes per game but still took issue with how he's being used. Let's take a look at where his shots are coming from in comparison to last season first: 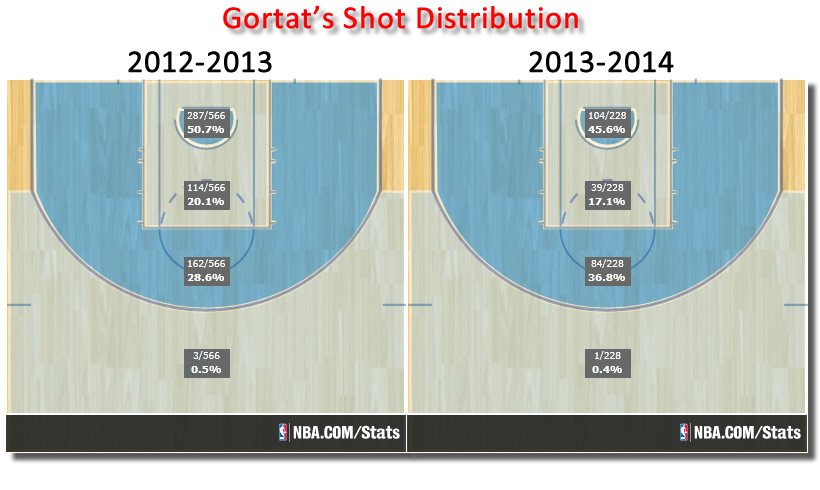 He's taking less attempts at the rim and more from mid-range than last season with the Phoenix Suns, but he's still shooting a higher percentage from the field and averaging more points than last season. The Wizards, as a team, shoot the highest amount of mid-range field goals despite shooting the fourth-lowest percentage (34.4 percent), according to NBA.com. He isn't being singled out to take mid-range jumpers, it's how the team plays overall.

How is he performing in these areas? He's actually shooting a great percentage from 10-14' out, according to NBA.com.

It's also worth noting that he's having a wonderful year playing out of the pick-and-roll. He's averaging 1.16 points per possession as the roll man and 28.6 percent of his play-type usage is under this category, according to Synergy Sports Technology. That's 8.6 percent more attempts than last season with the Suns.

The Wizards are on a four-game losing streak and find themselves out of the Eastern Conference's playoff seedings, so it's not uncommon for players to feel frustrated regarding their role with the team. The absence of Nene has had a negative effect of Gortat, but he's still having a great year on offense. The Wizards average 103.5 points per 100 possessions while he's on the court, second on the team behind John Wall.

Washington's problems don't point to Gortat's shot distance, but rather to their bench depth. The team averages just 89.2 points per 100 possessions when both Wall and Gortat are on the bench, per NBA Wowy. The Wizards bench averages an NBA-low 19.5 points per game on 38 percent shooting, according to Hoops Stats.

He might be uncomfortable "drifting" away from the rim, but that's just a small issue compared to the larger picture for the Wizards. They traded for the expiring big man to help the team make a playoff push, but their lack of productive reserves looks like it will be a season-long issue.

• Deeks: The NBA's trade season is about to start