At 12-14, the Bobcats aren't the laughingstock they once were. Al Jefferson is a big reason why.

Share All sharing options for: Q&A: Al Jefferson on the competent Charlotte Bobcats

TORONTO -- The Charlotte Bobcats were down 16 in the second half on the second night of a back-to-back on Wednesday. They could have given up. Instead they held the Toronto Raptors to four points in five and a half minutes, part of a 22-5 run that put the Bobcats back on top.

They'd need an overtime period and a buzzer-beater to put the Raptors away, but they did what they had to do. They persisted.

"That's the difference between this team and any other team that the Bobcats had in the last three or four years," new big man Al Jefferson said. "That mindset. Knowing what it takes to win."

Though the soon-to-be 29-year-old will only attribute it to head coach Steve Clifford's winning attitude, Jefferson is a huge part of that. No Bobcat playing major minutes in recent seasons had anything resembling his pedigree. When he arrived this summer, he brought with him 10 years of lessons learned.

Ray Allen used to conduct his detailed pre-game shooting routine alone. Now, as a member of the Miami Heat, he has company.

"He's that guy that we need on this team," point guard Kemba Walker said. "Not only basketball-wise, off the court as well because he's been through a lot. He's been on winning teams, he's been on losing teams. He's that guy in the locker room that you need. When guys are down, he's the one picking everybody up, so I was excited that we signed him."

Walker got to play hero in the end in Toronto, but many successful possessions started with giving it to Jefferson and letting the defense collapse. He's still dealing with the lingering effects of a preseason ankle injury -- something he says is affecting his lift on his shot -- but his presence is having a positive effect.

Against the Raptors, he scored 19 of his season-high 24 points after halftime and finished with 11 rebounds.

"This was his best game by far," Clifford said.

At the Air Canada Centre, Jefferson spoke to SB Nation about his new team:

People questioned how you'd fit defensively here. Do you take pride in how well the team is doing defensively when you're out there?

Yeah. We got a lot of success so far right now. We just gotta keep on it. We've still got some ways to go as far as staying consistent for 48 minutes. But I'm really proud of the way we're coming together on defense and really locking things down when we have to.

It's you guys on the floor doing the work, but how much credit do you give Steve Clifford's schemes for your success on that end?

He gets all the credit, in my opinion. Well, I'll say 90 percent because the 10 percent, we gotta go out there and do. But Coach is the one who planted the seed. When I first got here, even when I came on my visit to come to Charlotte and I was thinking about it, he made it very clear then that this was going to be a defensive-minded team. I've always been criticized for my defense and he's the one who told me that I'm really not a bad defensive player and gave me that confidence. He's the one who planted the seed, he's the one who came from a defensive-minded program in the years he's been in the league. He teaches real well, we just gotta go out there and do it. 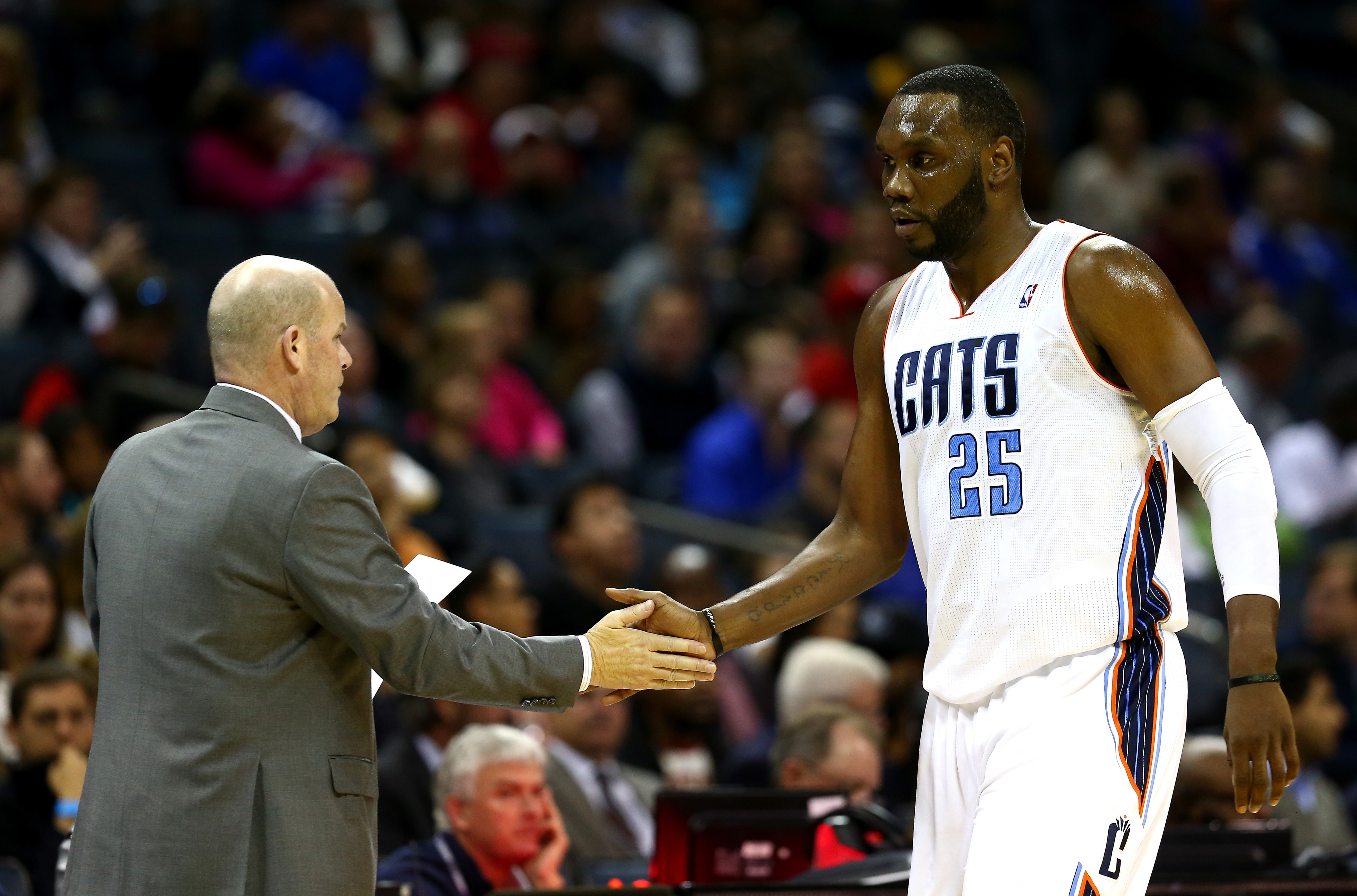 Kemba Walker on Jefferson's offense: "I've never had a guy like Al in my life. I've never played with such a great post player like that ever. He just attracts so much attention. He takes a lot of pressure off myself and the other guards on the team. He just makes life a lot easier. We just have to sit there and expect a pass and make shots."

Steve Clifford on Jefferson's defense: "People don't want to give him credit. Our defense was good when he was out and it's actually improved since he started playing. He's putting a lot into it." [Note: The Bobcats rank third in the league in defensive efficiency this season and first since Jefferson returned to action 14 games ago, per NBA.com.]

What's it like to work with [Bobcats assistant coach] Patrick Ewing?

Sometimes, still it's too good to be true. ‘Cause this is the guy that I watched growing up, who helped Yao Ming reach his peak, who helped Dwight Howard reach his peak, and here I am having a chance for him to help me reach my peak. It's still amazing. I just love to pick his brain. I love to sit there and listen to him talk because he knows what he's talking about. It's just amazing.

Do you get to talk about when he played and that kind of thing?

Yeah. And in his head, sometimes you would think that he can still go out there and play. His mind thinks it, but his body, nah. But he'll get the ball and start talking a little noise about how he used to do this and used to do that.

What about Michael Jordan. Have you been around him much, did he recruit you?

I've been around him. Honestly, I didn't talk to Jordan at all as far as the recruiting. I didn't see Jordan for the first time until training camp. But I know he had to put the okay call in. He's just one of them guys, I think he plays his role as far as the owner, he lets the coaches and the GM and the president do their jobs. But you know, when he's around, it's still kind of amazing because he's the best player in the world to ever play the game, in my opinion. So when I'm around him and he acts just like a normal guy, it still kind of messes with me a little bit. But he always gives some great advice. When MJ speaks, you listen.

What kind of stuff does he tell you?

He'll tell me when we're playing against a team that don't have a lot of bigs on their bench, post up, get ‘em in foul trouble, they don't have nobody else that's gonna come in and be a threat. Stuff like that. It won't be nothing big, but he'll just give me advice. And of course, like I say, you listen.

As far as playing the game, yeah, it was an easy adjustment because I'm just going to go do what I do best. Some of these young guys like Kemba Walker, or any of these young guys, they never played with a post-up guy like me, but the only hard part for me is just still trying to get back to 100 percent. I'm getting better and better each week but I've still got some ways to go. But as far as my teammates and me playing with them and them playing with me, it was pretty much easy getting on the right page. And I think right now we're there. To the point that we've got a chance to see how great we can be on the offensive end, like we are on the defensive end.

What do you think of where Kemba's at right now?

Josh McRoberts doesn't get a ton of attention, but coaches and teammates seem to really appreciate him. What is it about him?

He's a very underrated player, number one. He's just a smart guy when it comes to the game. He's got a high IQ of the game. He just knows all the right things to do. And believe it or not, he's our captain on that defense because no matter where you're at or no matter where Josh is at, you're going to hear his voice on the defensive end telling you what to do, where to be. It's just great, he helped me out a lot. Especially on the defensive end, he just really helped me out. And he's really, believe it or not, kind of like a point guard on the offensive end. He makes all the right decisions with the ball, he puts a lot of us in the right situation as far as scoring the ball. He's a great guy to have, great guy. I'm not going to say I wasn't a fan of his game, I just didn't know him before I got here because he's always been on the Eastern side and I've been on the West side or vice versa, so I never knew him as far as a player. But this little time I have spent with him, it's amazing how gifted he is. 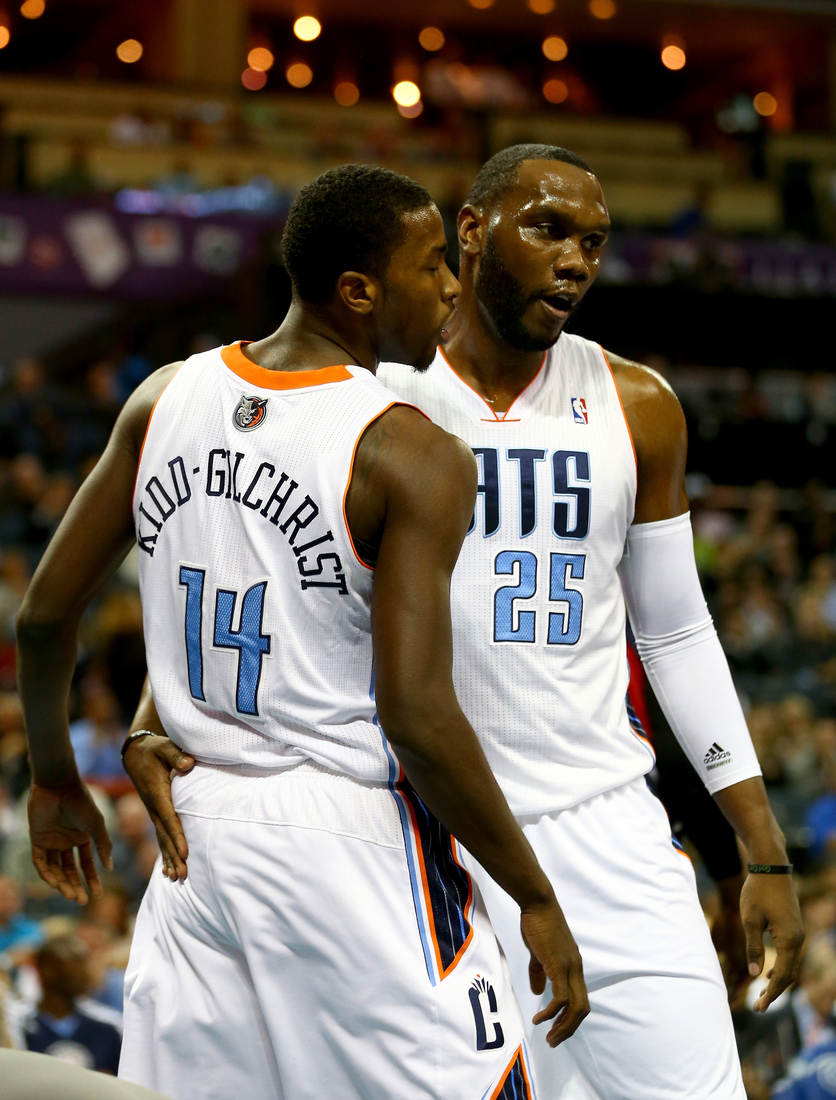 I know you haven't gotten a chance to play with him a lot, but do you see Michael Kidd-Gilchrist as a special defensive talent?

Oh my God. I mean, I seen him in preseason when were playing against Miami, matter of fact the game I got hurt. The way he was defending LeBron, I mean LeBron is going to be LeBron but he and Jeff [Taylor] were defending LeBron and LeBron had to just make tough shots. Or they were making him miss shots. The way they just looked at LeBron James, it was like, ‘Okay, this is LeBron, I'm gonna step it up.' Instead of some young guys, it'd be like, ‘Oh, this is LeBron James, uh-oh.' Them guys didn't do that. They took the challenge. That's when I knew MKG and Jeff Taylor, they're going to be something special on the defensive end.

You still keeping your eye on Derrick Favors and Big Turkey [Enes Kanter]?

Oh yeah, man. I watch Utah games, I keep up with my guys. Them guys, they're like little brothers to me. I keep up with ‘em. Matter of fact, I get a chance to play ‘em twice in the next two weeks. I'm looking forward to that, too, ‘cause Big Turkey always says he can stop me. So I'm gonna see where he's gonna be at.

• The Hook: Tanking and the pride of NBA GMs

• Flannery: The Knicks are a disaster in 3 acts

• They're Playing Basketball: An oral history of Kurtis Blow's iconic song and video