Rookie NBA head coaches are not faring well on defense

The analytic belief is that coaches have a larger impact on defensive performance than on their teams' offense. So how are the nine first-time NBA head coaches faring on that end? The Hook investigates.

Share All sharing options for: Rookie NBA head coaches are not faring well on defense

Having an elite defense typically does rely on having an elite defensive big man, and those aren't cheap either. But there are some general data-based indications that coaches have a pretty solid impact on defensive performance. It's not iron-clad basketball law, but the data suggests it. This post is not about that assertion, which is a sprawling theory worthy of deeper investigation. This post, instead, relies on that theory to take a glance at how the record nine rookie head coaches are doing on defense this season.

If coaches really do impact defensive performance heavily, we might get some glimpses of which rookie head coaches will rank highly going forward and which may not. The obvious caveat is that though we're about 25 games into the season, it's relative early.

Here's a chart showing how the nine rookies on the sidelines have fared compared to their teams' last season on defense. 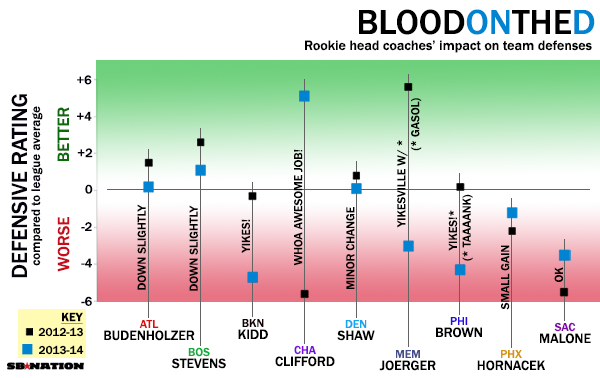 * Only three of the nine teams with rookie head coaches are better on defense this year compared to last season. That'd be the Bobcats, Suns and Kings. Of those, the Suns and Kings are still pretty bad on defense.

* That means that four rookie head coaches took over teams whose defense was below league average last season. Three have led their defense to improved numbers. The fourth is Jason Kidd in Brooklyn.

There are three big stand-outs here, though each coach has an interesting little story. Steve Clifford of the Bobcats is the surprise coach of the year, though perhaps Charlotte's defensive rebirth isn't a total shock to those closest to the coach. Charlotte had the league's worst defense in the NBA last season under rookie head coach Mike Dunlap. Clifford has the Bobcats at No. 4 in the NBA. The team's major additions were Al Jefferson (known as a walking minus sign on defense) and Cody Zeller (a rookie coming off of the bench). Michael Kidd-Gilchrist has been battling injuries. Josh McRoberts is Big Al's running mate up front! Nothing makes sense. So we credit Clifford, because we're out of plausible answers.

The second stand-out is Dave Joerger in Memphis. Joerger is an interesting case because the narrative goes that he ran the Grizzlies' defense last season as Lionel Hollins' lead assistant. Last season, Memphis' D rivaled the Pacers for No. 1 in the league. Under Joerger, the Grizzlies rank No. 25 in defense this season. There's one giant blinking asterisk, of course: Marc Gasol is injured. That matters. A lot. But should it matter this much? At the very least, things on not encouraging on defense at this point in Joerger's tenure. He should (and will) be given a fair, fuller look once Gasol returns.

Finally, there's Kidd. The Nets had heavy roster churn in the offseason due to the Pierce-Garnett trade, and a defender Brooklyn signed with high hopes (Andrei Kirilenko) has unfortunately struggled with injury. But no one anticipated Kidd taking a mediocre defensive team and making it worse. The Nets are No. 29 in the NBA this season in defensive efficiency. Kevin Garnett looks like a shell, and he's taken minutes from Reggie Evans. Deron Williams' ankle troubles have prevented him from stopping anyone. It might not be the fault of Kidd's scheme or chops, but you don't land at No. 29 in defense by accident.

The teams led by Mike Budenholzer, Brad Stevens and Brian Shaw aren't too far off from last season's defense. In the case of Shaw, that might portend great things, since the Nuggets lost ace wing defender Andre Iguodala in the offseason. Not sliding into oblivion is quite a feat. The Hawks lost Josh Smith and the Celtics are basically a team of two-guards and power forwards, so Bud and Stevens certainly retain hope of being top-notch defensive coaches, especially considering both Atlanta and Boston remain about league average in that category.

There's been a solid drop-off in Philadelphia, where Brett Brown replaced noted defensive coach Doug Collins, but keep in mind that the team jettisoned Jrue Holiday and is legitimately trying to lose on a nightly basis. So take any Sixers numbers with a grain of salt. The Suns have been surprisingly good, though Jeff Hornacek's defense -- while improved -- remains middle of the pack at No. 18. (The offense has fueled Phoenix's rise. All hail Eric Bledsoe.)

Michael Malone is an interesting case. He was hired by the Kings explicitly because of defense. That was the entire pitch: he can run a defense. He can get the guys to buy in. He's done this, and he'll do this. But it's ... not really happening. The Kings are No. 27 in defensive efficiency and not getting better as the season wears on. Of course, there is no defensive personnel on the team, and there's been a ton of churn in the starting lineup as the front office wheels and deals. Malone has plenty of time to turn it around, and we should note that the defense has improved over last season's performance despite the low rank. But there's a long way to go.

We'll check back in with our rookie crew later in the season. Right now, most of them looking promising defensively or have a valid excuse. As those excuses dry up we'll get a better sense of whether they can run top-flight defenses in the NBA.

• The "Nail": Ex-NBA assistant explains the key to help defense

• The Hook: Tanking and the pride of NBA GMs

• They're Playing Basketball: An oral history of Kurtis Blow's iconic song and video