A busy NBA Monday includes a matchup of two of the league's best big men, but it's about the Mavericks stopping the Rockets' three-point shooting.

Eleven games make up the NBA schedule on Monday. The games we're watching include a battle in Texas, a bitter contest between former playoff foes and an Eastern Conference contest of two rosters that'll make for interesting matchups.

The main course: Mavericks vs. Rockets 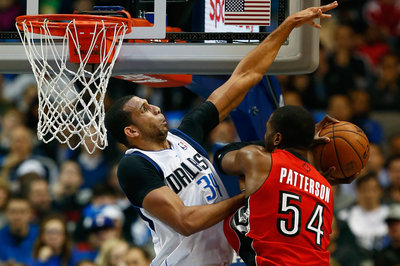 Mavs Moneyball talks about the elephant in the room -- Dallas' questionable defense.

The Dallas Mavericks aren't horrible at any one thing, but they're also not elite at anything either. So when their 4-9 road record sits next to an 11-3 home record, it's a good bet the bad is at risk of coming out at Houston. The Mavs face a Rockets team riding Dwight Howard's presence in the paint so much that it's led to the roster becoming the most prolific three-point shooting team in the NBA.

The good news for the Mavs is that Houston is shooting just 35.3 percent from deep this season, which is just 17th in the league. The bad news is that Dallas is coming off a game against another prolific three-point shooting team, the Phoenix Suns, in which it allowed 15-of-30 shooting from deep. Though the Suns do it in a very different way, that can't happen if Dirk Nowitzki and his crew hope to win in a Texas duel.

The appetizer: Hawks vs. Heat

Mike Budenholzer's Atlanta Hawks have won six of their last eight with one loss coming to Oklahoma City and the other probably being considered an outlier -- it was to the Knicks. A top-10 defensive club by allowing 104.1 points per 100 possessions, Atlanta has the size and rebounding ability behind Al Horford and Paul Millsap to bother the Miami Heat. Add into it that the Hawks have not scored fewer than 114 points in their last three games, and LeBron James could have a challenge on his hands. The Heat took the first meeting between the two squads this season by a 104-88 score.

The dessert: Warriors vs. Nuggets

For different reasons, the Denver Nuggets and Golden State Warriors aren't enjoying as much success as they did last year, but both appear to be solid playoff squads once again. While Mark Jackson is probably happy he's not playing a George Karl-coached Nuggets team, it's hard to bet against the feelings being much different in the aftermath of an intense six-game playoff series between the two teams. And on that note, it'll be an interesting storyline to see how the Denver crowd reacts to Andre Iguodala in his return while wearing blue and gold.

The rest of the games (ET)