LeBron James is dunking all over the Los Angeles Lakers

Share All sharing options for: LeBron James is dunking all over the Los Angeles Lakers

It turns out Wes Johnson is incapable of defending LeBron James in a post. Shocker!

LeBron and D-Wade gave us all an extra special Christmas gift on one fastbreak against the Lakers on Wednesday. Wade not only threw the alley-oop, but did so just a little too far behind LeBron's head and ... yeah, James cocked it back before finishing violently for a little extra holiday flair.

As Jeff Van Gundy pointed out -- after saying THEY SHOULD STOP THE GAME RIGHT NOW -- it's one thing to see guys throw down dunks off the glass. That happens all the time, especially in NBA Street Vol. 2. But this is a dunk off the glass with LeBron's OFF hand, which is pretty incredible -- even NBA players don't necessarily have the dexterity to catch and flush on the run with that one. 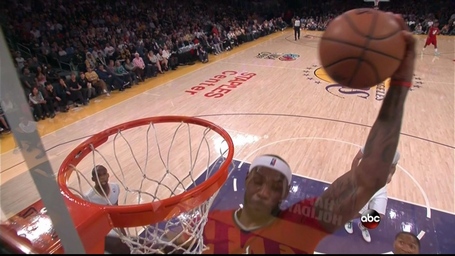 This is just getting silly.

(Note: Here's a video breakdown of two of these dunks from Coach Nick).