While most of the East is breaking down and falling apart, Kyle Lowry and the Raptors are rolling.

Share All sharing options for: Kyle Lowry and the suddenly surging Raptors

TORONTO -- With mere moments remaining on the game clock, the Air Canada Centre crowd standing and applauding, Kyle Lowry released a stepback three. He only shot it to avoid a shot clock violation, the ball's destination irrelevant to the game's outcome. Of course, it swished through the net.

That's the kind of night it was. The bucket gave the Toronto Raptors point guard 10 points in the fourth quarter and a season-high 32 in the game, to go along with 11 assists, eight rebounds and just one turnover. Lowry then trotted the other way as he untucked his jersey, waiting for the sound of the final buzzer to let out a satisfied smile. His performance in Saturday's 115-110 win over the New York Knicks was his most dominant of the season, one of his best as a Raptor.

He should still be smiling. Laughing, even. Led by Lowry, Toronto has gone 7-3 since trading Rudy Gay to the Sacramento Kings. Just as soon as that trade was completed, there were reports that the Raptors were shopping Lowry, looking to plunge to the bottom of the standings to set themselves up for a high lottery pick. The way they are playing now, a top-five pick looks less likely than a top-three seed.

The evolution of DeMar DeRozan

Lakers coming to grips with reality

The evolution of DeMar DeRozan Lakers coming to grips with reality

Lowry's averaging 18.5 points, 8.4 assists and 5.0 rebounds in the past 10 games, with a 59.8 percent true shooting percentage. It was obvious that Lowry would have an opportunity to boost his numbers in the absence of Gay's 18.6 field goal attempts per game, but players react to trade speculation differently. If he's auditioning for his next team -- regardless of where he finishes the year, Lowry will be a free agent this upcoming offseason -- he's putting on a hell of a show.

"With all the trade rumours and all the bullcrap that's going around, he's been positive and upbeat and a leader," Raptors head coach Dwane Casey said. "He could've went in a shell and kind of isolated himself from everybody else, but he's dove in and been positive about it."

"What am I gonna do?" Lowry said with a laugh. "It's my job. It's a business. Be mad? It is what it is to me. I'm really not worried about it. Until, like I said -- I've said it 50 million times and I'ma say it 50 more -- until the day something happens, I'm a Raptor and I'm gonna play for the Raptors and play hard for the Raptors."

Those Raptors are dependent on him playing and playing hard. Of Toronto's starters, only big man Amir Johnson retains his effectiveness when Lowry goes to the bench. The rest are rendered much less efficient, and the defense is at an immediate disadvantage. If the Raptors do end up moving him, you can expect a swift drop-off. If they don't, though, they could keep improving.

Toronto forward Patrick Patterson, acquired in the Gay trade, previously played with Lowry when the two were Houston Rockets. Patterson's not surprised with what Lowry's doing, saying he expects Lowry to get triple-doubles and he wished two extra rebounds had come his way against New York.

"He's relentless," Patterson said. "He never gives up. He never backs down to the competition, no matter who he's going up against, whether it's someone who is bigger or faster or taller than him. He always accepts the challenge and he's just an active motor out there. He doesn't stop, he never gets tired, he's always trying to do the right thing for everybody and, most importantly, he can score. So you have to respect his scoring ability but also his ability to pass the ball."

The biggest criticism of Lowry on the court under Casey has been his ability to juggle those two tasks. He's most dangerous in attack mode, but part of his job is to get other guys going. With the Raptors' reconfigured roster, this appears to be easy for him. Casey raved about how Lowry is running the team, praising him as effusively as he ever has in their time together.

"Since he's been in the league, I think he's playing at the highest level I've seen," Casey said. "He's playing with such force and such confidence and playing the game the right way. He's been playing lights out." 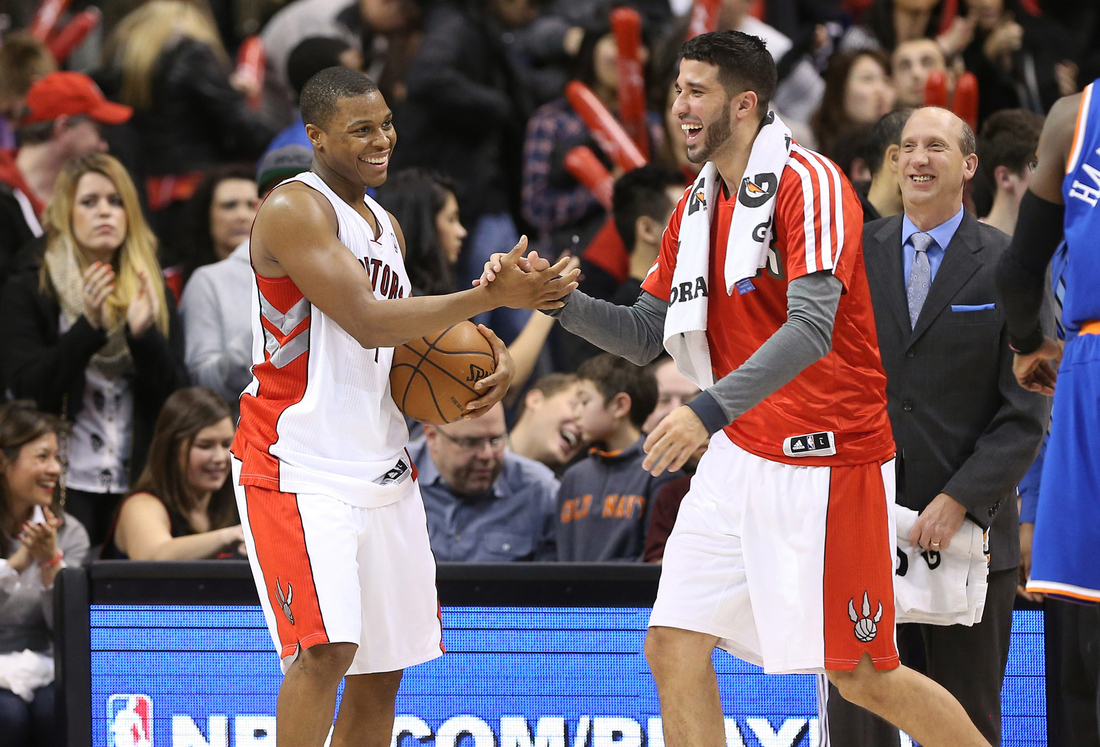 As a team the Raptors are playing their best and most aesthetically pleasing ball in a long while. Stagnant sets and depressing assist totals made them a chore to watch earlier in the season, but that's improved with this new group. Confidence-building wins in Dallas and Oklahoma City were powered by balanced scoring and teammates trusting each other.

Patterson said that when he arrived he was just worried about fitting in, and thankfully things have been smooth. If you're open, you're probably going to get the ball. Lowry said if you miss a shot, it doesn't mean you won't get a touch the very next time down. If someone is free, you want to make the extra pass.

"You don't worry about someone getting up x amount of shots," Patterson said. "There isn't an immense amount of pressure just on one person. When you move the ball from side to side, you share the ball, it looks beautiful out there. And most importantly, everyone's having fun."

For Lowry, the way things have been going, that's indisputable.