Terry Stotts has the Trail Blazers' offense purring, leaning on his past to create a fresh future in Portland. Can their perimeter-heavy attack lead them to a title?

Terry Stotts and the Portland Trail Blazers are flying in the face of "defense wins championships" this season, piling up victory after victory by riding the best offense in the NBA. Partner an average of 110.4 points per 100 possessions with Damian Lillard's sensational follow-up campaign to his Rookie of the Year outing, and suddenly a juggernaut has been built in the Pacific Northwest.

Pau's struggles are his own

Pau Gasol wants the ball in the low post, but is he justified in criticizing Mike D'Antoni's pick-and-roll system? Not really.

Pau's struggles are his own

If you want to beat them, you better be ready for a shootout. In the seven games Portland's lost this season, their opponents have scored at least 100 points in each of them. That's both a nod to the team needing to improve their defense, but also how much firepower is necessary to sink Portland. In five of those seven losses, the Blazers broke the 100-point threshold. Three times they were defeated in the final seconds of the fourth quarter. It's a matter of fighting fire with fire against the Trail Blazers.

They aren't just rolling over on the bottom of the league, either. The Blazers have a handful of statement victories already in the books through the first trimester of the season. There was the 106-102 win over the Indiana Pacers, the best defense in the NBA. Portland followed that up with a 111-104 victory against the Oklahoma City Thunder just two days later, riding their roaring offense to blistering mark of 115.9 points per 100 possessions, Terry Stotts wears his philosophies and history proudly. It wasn't long ago Stotts was an assistant coach under Rick Carlisle with the Dallas Mavericks when they postponed the start of Miami's "Big Three" era. The Blazers are a perimeter shooting team, and Stotts will point directly to the Mavericks if you question it, as Charles Barkley did recently. Here's his response, from a phone conversation with ESPN's Henry Abbott:

I think that's the easy way out.

I don't like the idea that Phoenix didn't win a championship and so what they did was wrong. If that's the case, then 29 teams are wrong every season.

We won in Dallas [in 2011] with a lot of shooters. San Antonio has changed their style, and shoots more 3s now. Miami has their approach. There isn't one definitive style that wins. To win a championship you have to be very good, top ten or so, in both offense and defense.

The best defenses take away the paint, and not many teams have been able to score well against teams like that.

The roster is loaded with elite three-point shooting threats, a rangy frontcourt player in LaMarcus Aldridge and Robin Lopez, a hustle player to chase second-chance rebounds and protect the rim. Sound familiar? It should: 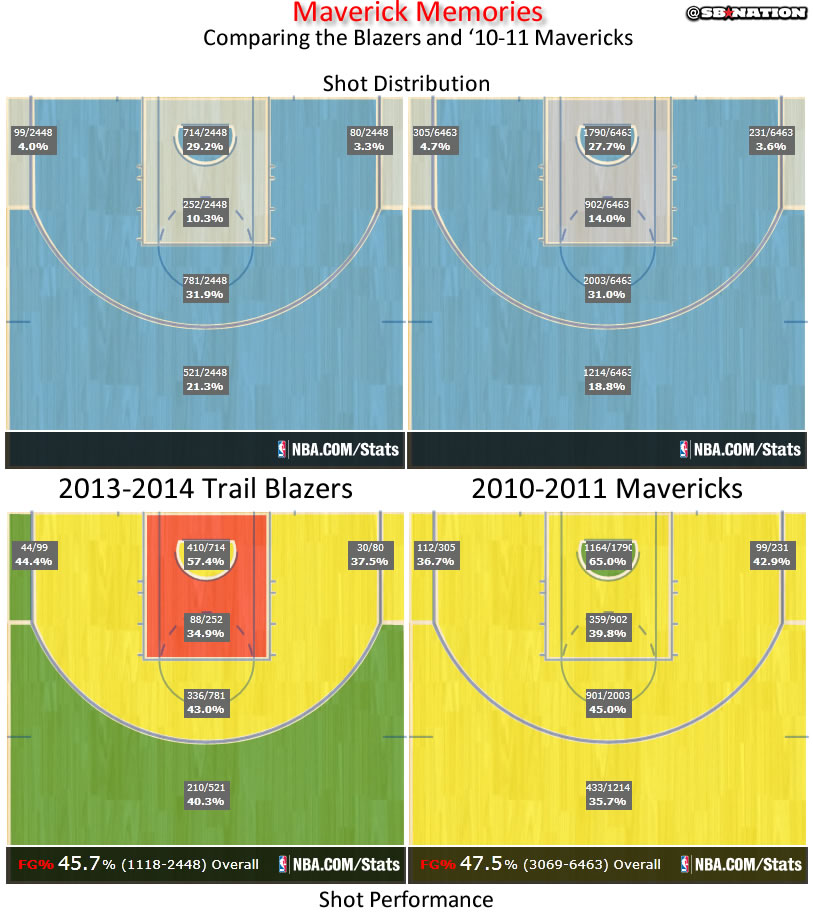 The Mavericks were much more effective around the rim, but the Blazers are an incredible three-point shooting team in comparison. The three-headed monster of Wesley Matthews, Nicolas Batum and Lillard from long-range is creating headaches for opposing defenses while turbo-charging their own offense. Aldridge is one of the league's best mid-range shooters and a great outlet on possessions where everything falls apart.

And Lopez is the glue guy under the rim taking advantage of defenders pulled away from the paint. He's pulling in a career-high 14.3 percent of available offensive rebounds in his first season with Portland and has given the team a huge lift in an area they ranked 23rd in last season, according to Basketball-Reference. This year, they're third in the NBA in total offensive rebounds.

Extra possessions for a lethal offense is a crucial piece of what makes this Blazers team so dangerous. That's like giving Craig Sager extra fabric choices for his suits.

Their offense has been one of the marvels of the 2013-2014 season. A team that missed the playoffs is drumming teams over the head with offense at a higher efficiency clip than the Miami Heat did last season. The Blazers are operating the best offense since the 2009-2010 Phoenix Suns, a team that was two wins away from the NBA Finals.

So how do the Blazers stack up compared to the best offenses in the past decade? Surprisingly well, actually: 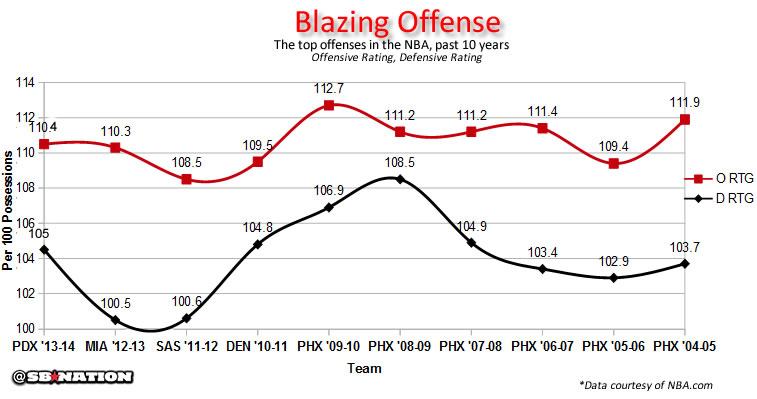 Their defensive efficiency is worrisome, though. Only once in the previous nine seasons has the best team on offense walked away as the NBA champion: last season. Portland is allowing more points per 100 possessions than many of those Phoenix teams that created the "take the D out of D'Antoni" jokes that are still going strong.

There is some encouraging news when you dig into the defense, though. The Blazers aren't getting beat at the rim, holding opponents to 57.6 percent shooting in the restricted area, according to NBA.com. That's the eight-best percentage in the NBA, a vast improvement from ranking in the bottom 10 last season.

And when you compare the Blazers to the other great offensive teams, they do stack up OK. 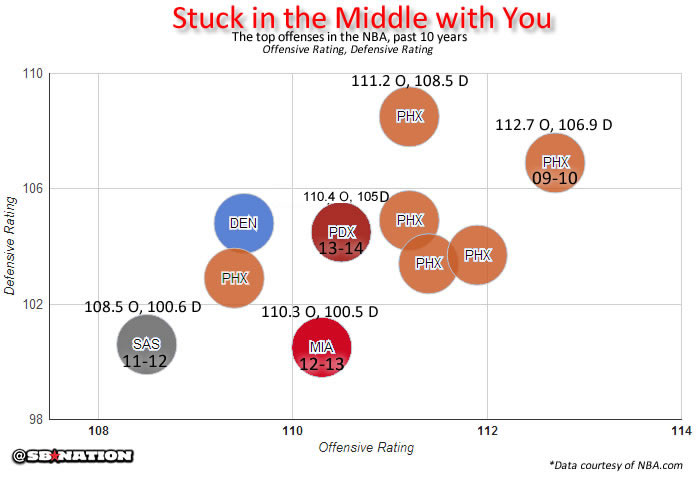 The question of their unimpressive defense remains, though. Maybe it will prove to be a fatal flaw, sinking their title aspirations. Maybe all the optimism for a team that has risen out of nowhere after years of franchise-debilitating injuries set the team back will end with more disappointment. The Mavericks exorcised their demons by leaning on a perimeter-heavy offense, and this Portland squad could easily do the same. There's still lots of season left.

We'll get to see if the Blazers successfully pay homage to Dirk Nowitzki's finest hour, but if they don't, you can bet they won't go out quietly.