The Miami Heat are expected to win every time they step on the floor. They've earned that, and it doesn't make things easy.

Share All sharing options for: Heat play games within games to stay focused

TORONTO -- The question hung in the air only a split second. The two-time defending champion Miami Heat had extended their winning streak to nine games, but just barely -- their lead was at 20 in the third quarter, then it was two in the fourth -- so what was the toughest obstacle to overcome?

Spoelstra then gave credit to the opposing team, the Toronto Raptors, for playing with force. He knew it wasn't about the other guys, though. It rarely is. The Heat played differently with their big lead. When you're this good, you're often fighting human nature.

The next game, they needed Chris Bosh to score 13 consecutive fourth-quarter points to come back and beat the Charlotte Bobcats by one. Then Tuesday, it finally bit them. Miami cut an 18-point Detroit Pistons lead to three with another fourth-quarter run, but got no closer, and that was it for the streak. It had to happen at some point and was likely to happen as the result of losing focus, taking shortcuts in their distinctively exhausting brand of defense.

"If you don't maintain that edge mentally, teams will make you pay," Heat forward Shane Battier said last week. "Every team has those lapses. Veteran teams, contending teams try to keep those games to a minimum."

You often hear the big-picture questions about this Miami team: How challenging is it to avoid a championship hangover, to stay healthy during those extended seasons, to stay hungry after all the success? This is a daily thing, though. There is nothing a team like the Pistons can do to stop Miami playing near its peak, and this is the case most nights.

The Heat have yet to travel west, and the Eastern Conference has been putrid. In 18 games, they've played only two teams with records above .500. Their last five opponents have beaten Miami a total of three times combined since LeBron James, Dwyane Wade and Bosh teamed up, including that loss to Detroit. It's not like they can start the playoffs now, though. 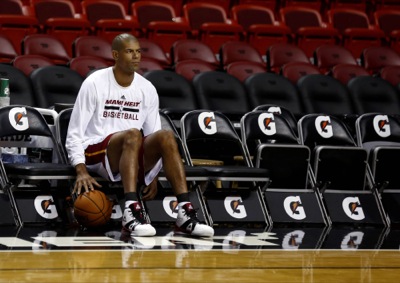 "We understand the progression of where we’re supposed to be at certain points of the season. So it’s not necessarily about testing ourselves against certain teams. We look at our numbers and we started out fairly slow on the defensive end. Those numbers have improved; now we’re in the top 10.

"Usually by Thanksgiving, you should know where you are and you should be at a certain level. We think we’re getting there. Offensively we’re playing great. So the next stretch until Christmas, New Year’s is the time to really start to shape up our rotation, to really solidify roles.

"So going into the new year, you sort of are who you are. And then you start to make slight adjustments and get ready for the home stretch. That’s the mindset of a veteran team."

"Obviously the playoffs are the best part of NBA basketball, and there's nothing that gets your juices flowing like NBA playoff basketball, but you have to try to find a way to take joy and take delight and fulfillment out of the grind of the regular season."

The closest thing Miami's had to what television analysts call a "measuring-stick game" was against the talented Los Angeles Clippers. Chris Paul and company were about a week into the season, though, and under new head coach Doc Rivers, they're still carving out an identity. It'd be convenient to battle more contenders, but the Heat have to settle for the fact that the other team always gives the champs its best shot.

"It's a crescendo that happens throughout the course of the season, when you play the good teams and you see how you fare, and then some of the biggest tests are the teams that are below .500," Miami guard Ray Allen said. "Those games are just as important."

While one recent victim has banned stat sheets from the locker room, the Heat need to look at their numbers. Their stars take pride in shooting a high percentage; the coaches make sure they know if their defensive efficiency is slipping.

It's not just about wins and losses when you're capable of playing poorly and still winning.

"We gotta play games within games with ourselves." -Dwyane Wade

"We gotta play games within games with ourselves," Wade said.

Looking at Miami's schedule, your eyes dart to next Tuesday. That's when the Heat visit the 16-2 Indiana Pacers, a team obsessed with getting the No. 1 seed in the conference. The Pacers took Miami to seven games last year and, if it happens again, they want home court. These are the only two teams in the East with winning records. Barring a major injury, a conference finals rematch feels inevitable.

While it's hard to evaluate where the Heat are compared to last season, Indiana's clearly improved. Paul George has ascended to superstardom, and through five weeks their defense has been historically great.

"Obviously they're getting more confident," Wade said. "They're more comfortable with each other, with their style of [play], with their game. And that's why they're going to be the toughest challenge for any team in the league this year."

Before playing the Pacers, though, Miami has games in Chicago, Minnesota and in Detroit against the team that just snapped its streak. Regardless of who's on the Heat's schedule and how other teams are performing, the idea is to look inward, to concentrate on the habits they're forming.

Miami doesn't have the same problems that other teams do. There's no new coach, few new players and no doubts about the talent. The Heat know who they are. They have a blueprint for success and the highest of expectations. None of this means it's easy.

"Most of it is mental, most of it is with us," Spoelstra said. "And that's the challenge."