Larry Sanders will be issued citations for his role in a November bar fight, and the Brooklyn Nets' "re-assigned" coach is reportedly looking to take legal action on the team.

Milwaukee Bucks center Larry Sanders wasn't charged criminally after he found himself involved in a Nov. 3 bar fight at a Milwaukee club, but on Wednesday it was reported he was issued two civil citations. Sanders faces disorderly conduct and assault and battery charges after getting into an altercation inside Apartment 720.

The incident led to surgery on Sanders' thumb to repair a torn ligament, which will keep him out likely through most of December, if not into January.

It's just more bad news for a player who signed a four-year, $44 million contract extension this summer.

Here's a video of the incident released to local Milwaukee news stations. 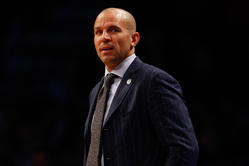 Brooklyn Nets assistant coach Lawrence Frank was re-assigned by head coach Jason Kidd on Tuesday, but nobody expected him to continue working for the team by sitting in an office and filing daily reports. Excused of his bench duties, Frank is seeking "high-powered legal counsel" to reach a buyout agreement with the team, according to the New York Post.

Frank, who was reportedly the highest-paid assistant coach in the NBA, was apparently at the beginning of a six-year contract worth at least $6 million.

Kidd apparently sought Frank to help him ease the learning curve of jumping straight from an NBA point guard to an NBA coach, but Yahoo!'s Adrian Wojnarowski reported that the relationship between the two crumbled amid the Nets' 5-13 start to the season.

The Los Angeles Times' Mike Bresnahan reports Los Angeles Lakers guard Kobe Bryant was working through Wednesday practice, and if he went through Thursday's practice he could be cleared to play Friday against the Sacramento Kings.

If Bryant makes it through practice Wednesday and Thursday without feeling pain, "then Friday looks good," Lakers Coach Mike D'Antoni said, quickly adding, "but we don't know that for sure."

Bryant was watched by the media at the beginning of Wednesday practice wearing his new Kobe 9 shoes, which haven't been released to the public. The new high-tops are set for a media preview on Wednesday.

The day has come to unveil the #Kobe9. But first, the 'Prelude Pack' http://t.co/ZCUtDnSsxE

The New York Knicks, losers of nine straight, are in a free-fall that extends past the lofty expectations set on them earlier in the year. Simply, they're not constructed to survive with injuries hitting and little sense on the roster created around Carmelo Anthony.

Posting and Toasting: More on the Knicks

Of course, the rumor mill will always burn quite hot if and when the Knicks' head coaching job opens. A few weeks ago, it was Kentucky Wildcats coach John Calipari being linked to any potential opening.

The Charlotte Bobcats placed a timeline for Michael Kidd-Gilchrist's broken hand at four to six weeks after confirming he suffered a non-displaced break of his fourth metacarpal bone. The news of the forward's injury comes as part of a rash of broken hands suffered in the league.

Anthony Davis, the first-overall pick who was selected just before Kidd-Gilchrist in last year's draft, suffered a break of his fifth metacarpal bone in his hand a few days ago.

Schroder gets taste of D-League

Dennis Schroder, the Atlanta Hawks' rookie point guard, has been sent to the D-League's Bakersfield Jam after falling out of the rotation on coach Mike Budenholzer's squad.

Schroder has played in just two of the last eight games. The 20-year-old from Germany is averaging 3.7 points and 2.5 assists per game.