The NBA's trip to Mexico City on Wednesday night isn't going according to plan.

Share All sharing options for: Mexico City arena fire causes Spurs vs. Timberwolves to be postponed

UPDATE: The game has been postponed.

The highly anticipated game between the San Antonio Spurs and Minnesota Timberwolves in Mexico City has been delayed Wednesday night due to fire and smoke in the arena. According to Minnesota broadcaster Dave Benz, an ongoing electrical fire in an elevator has forced officials to clear out the lower bowl of seating.

From the looks of things on NBA TV, this game won't be starting any time soon: 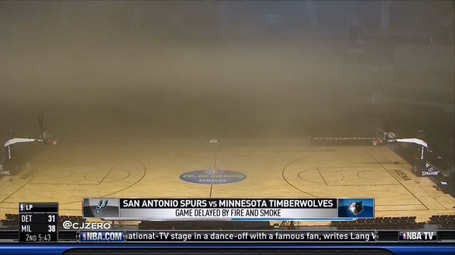 The Spurs apparently had to leave their locker room and return to the team bus due to smoke, the San Antonio Express-News reports.

At this point, it's unclear what's caused the fire or how long it will take for officials to restore order at the arena. Given that the game was scheduled to tip off at 9:30 p.m. ET, we're presumably looking at a lengthy delay that hopefully doesn't become a cancellation.