LeBron teaming up with Kevin Hart for basketball comedy

Share All sharing options for: LeBron teaming up with Kevin Hart for basketball comedy

Have you ever wondered, "Gosh, I wonder what it would be like if you got rid of every player at the All-Star Game except for LeBron and replaced the game with a comedy sketch"? Well, do I have good news for you!

That's right, LeBron James and Kevin Hart are joining basketball and comedic forces on an upcoming film prospectively called "Ballers," a comedy in which Hart's character lives in the shadows of his NBA star brother.

[Hart's character] gets a chance to prove himself when he and some pals attend a weekend fantasy basketball camp in Miami. Hart is certainly dominant in the stand-up arena, but posting up against this screen sibling could be dangerous. Hart is under 5'3″ while James is a towering 6'8." That kind of sibling size differential hasn't been seen since Danny DeVito and Arnold Schwarzenegger starred in another Universal comedy, Twins.

TWINS? TWINS! THIS IS BASKETBALL TWINS?

I'M ON BOARD -- SO ON BOARD I ALREADY MADE THE POSTER AND TOOK SOME PUBLICITY PHOTOS. 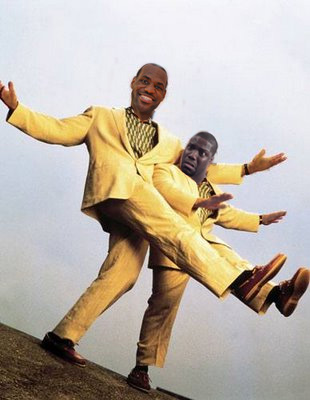