The third-year player hasn't made the jump many expected, but with the Big Three still in charge there is plenty of time.

Share All sharing options for: Kawhi Leonard's leap to stardom put on hold

There weren't many positives the San Antonio Spurs would take away from their NBA Finals loss to the Miami Heat. Tim Duncan had a fifth ring in his grasp, after all, and this isn't a franchise steeped in moral victories. But if one thing stood out for a team with no plans to end its pursuit of a fifth title, it was the emergence of then 21-year-old Kawhi Leonard, the player Gregg Popovich had already labeled the next face of the franchise.

More: More on the Spurs at Pounding the Rock

After watching the Finals play out, this wasn't a sentiment that seemed too far-fetched anymore. His 19-point, 16-rebound performance in Game 7 almost single-handedly kept the Spurs alive, and the expectations only grew larger from there.

"Kawhi is the new Parker, Ginobili, Duncan kind of guy," Popovich said prior to the 2013-14 season. "He's going to take over as star of the show as time goes on."

The stage had been set, and Leonard had taken the first big step in that direction. But there was much left to be proven, and plenty of doubt existed as to whether or not the former 15th-overall pick had the skill set and requisite athleticism to make the jump to stardom among the rest of the NBA's outstanding crop of small forwards.

So far this season, that leap has yet to come.

Since his arrival in San Antonio, Leonard had never been a player who needed the ball in his hands to be effective. He came into the league as a great defender with tremendous length and an innate ability to read and react in passing lanes without gambling. He was a tremendous rebounder on the offensive and defensive glass coming out of San Diego State.

But throughout his collegiate career he was never a great shooter. His 27 percent career mark from the three-point line in college scared some teams off that felt he was more of a 6'7 small-ball "four" than an actual NBA perimeter player. So when he converted on better than 37 percent of his threes through his first two years in the league, Leonard immediately became a perfect fit in the Spurs' system as a hyper-role player; an extreme version of the incredibly important "3 and D" wing player that complemented the Tony Parker pick-and-roll attack.

However, through the team's first 18 games this season, Leonard's perimeter shooting has been a nightmare. He's shooting just 22.7 percent from deep, and while his defense has been as good as it gets in the NBA, his inability to space the floor at the moment has caused offensive problems for the Spurs' starting lineup.

Teams are sagging off Leonard, minimizing his effectiveness as a cutter and further crowding the paint for Parker on the drive and Tiago Splitter as a roll man off the pick. It's even had a recent effect on Danny Green, whose man now refuses to leave him because Leonard's defender has the freedom to help off when needed.

In this snapshot, Parker penetrates off an angle pick and roll with Tim Duncan, and Jeremy Lamb doesn't even move off Manu Ginobili to help cut off penetration. Instead, Kevin Durant — who is guarding Leonard — slides all the way inside of Boris Diaw to help protect the paint and elects to leave Kawhi wide open. 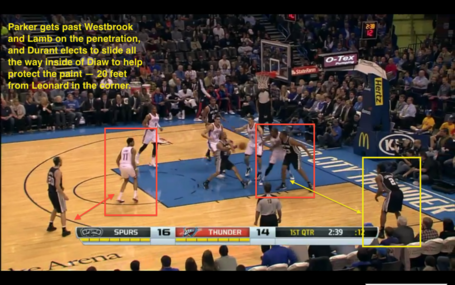 Now, Leonard actually hits this shot — he's only made three in the last five games — but it's a somewhat extreme picture of the way teams are defending the Spurs as of late. San Antonio's offense is heavily predicated on spacing, so it can be devastating when one of its wing players isn't hitting perimeter shots.

But the Spurs are surviving off of great bench production, so Leonard's inability to hit the three hasn't grounded the team in dire straits at this early juncture of the season.

What to expect from Kawhi going forward

There was a great expectation that Leonard would be more heavily used within the offense this year. And while he has been used in a few more pick-and-roll and post-up situations, those other three guys are still the biggest pieces in the Spurs' offense.

Parker, Duncan and Ginobili still run the show in San Antonio, and the prediction that we'd see an exponential usage increase from Leonard was likely a result of over-thinking. With the Big Three still largely featured, expecting a significant change in philosophy was unreasonable. A quick look at Leonard's Synergy numbers shows that his usage hasn't changed much at all — up just 2.7 percent from last season, according to NBA.com — aside from a few more pick-and-roll and post-up plays (the latter of which have been effective). The Spurs aren't using him much differently, he's just not hitting his threes. That has a significant impact on the offense.

But when you look at the rest of his game, you can see why his numbers have basically stayed the same overall. Leonard is hitting better than 58 percent of his shots from inside the arc, including 50 percent from mid-range and 68 percent from inside the restricted area. Just look at his Christmas-themed shot chart: 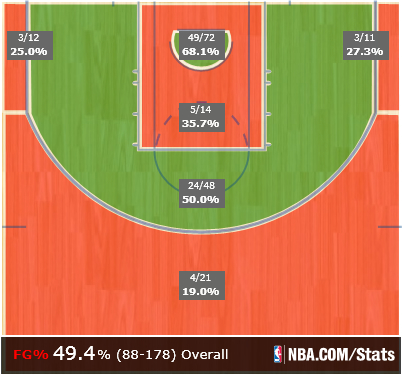 Even with his terrible shooting from beyond the arc, Leonard is still scoring at a clip of nearly 50 percent. And because of his performance in the Finals and the ensuing comments from Spurs camp that he'd be more involved in the offense during the 2013-14 season, it's possible we see his struggles as more significant because our brains are telling our eyes they should be noticing that higher usage rate. While that rate has increased slightly this season, it hasn't done so significantly enough to warrant as much concern as many have shown regarding the third-year player.

If and when the threes start falling — and you'd have to believe they'll start going in at a higher rate at some point — the rest of his repertoire should open up. Consequently, the Spurs' offensive numbers will likely spike, at least for the starting lineup. Until then, they're going to have to overcompensate. And with the depth they possess — Leonard is playing just 27 minute per game — that's not a major issue in early December.

Popovich recently said after the team's narrow victory over the Atlanta Hawks he's not worried about Leonard, that the young player is in a slump the likes of which every player goes through. While, yes, any smart coach would speak that way of their young star, these two have at least earned the benefit of the doubt to this point.