Korver broke the record for a three-pointer in consecutive games Friday night against the Cavaliers.

Kyle Korver broke Dana Barros' record of 89 consecutive games with a three-pointer made in the Hawks' 108-89 victory against the Cleveland Cavaliers on Friday night.

Ninety games should have been impossible. But Korver, with a simple flick of his wrist, defied the absurdness that is connecting a basketball into a 56.55-inch circumference rim from over 22 feet away. Ray Allen never did it. Reggie Miller never did it. Neither did Peja Stojakovic or Dale Ellis or Steve Nash or any of the other prolific three-point shooters you can think of.

Kyle Korver did it and, in doing so, solidified his name among the greatest long-range shooters in NBA history.

He told the Atlanta Journal-Constitution, in the most matter-of-fact way ever, that breaking the record felt "good."

"It feels good," Korver said. "I’m glad it’s done. My naps the last couple of games haven’t been very solid. I try not to think about getting this close and not getting it. That would not have been fun. I’m proud of it for sure."

He broke the record in the most fitting way possible -- a spot-up jumper from behind the arc. Spot-up jumpers account for 32.7 percent of Korver's offense, according to mysynergysports.com, and he's shooting 62.2 percent from downtown in those situations.

Jeff Teague came off a side pick-and-roll and hit a rolling Paul Millsap. Millsap gathered to a collapsing Cavaliers defense and jumped towards the rim. Realizing he couldn't get a shot off around Andrew Bynum, Millsap kicked the ball out at the last second to Korver, who was spotted up on the right wing.

Korver rose and flicked the ball towards the rim in a quick, smooth shooting motion. His release is so fast and fluid that it's nearly impossible to contest once he begins his motion. Alonzo Gee tried to recover and contest the shot, but it was a futile close-out attempt. The ball swished through the net and the Atlanta crowd broke out in a roar to celebrate Korver's accomplishment.

Millsap told the Associated Press that he was happy to be a part of the historic shot.

"I'm in the history book now," he said with a smile. "I'm in awe to see something like that. Teams focus on keeping him off the 3-point line, and for him to do that for so long is an amazing accomplishment."

Korver, 32, is having the best shooting season of his 11-year career.

The 50-40-90 club is one that celebrates some of the league's best shooters. It's incredibly difficult to shoot at least 50 percent from the field, 40 percent from range and 90 percent from the charity stripe. Six players have earned entry into the club and two players, Steve Nash (four times) and Larry Bird (twice), have done it more than once.

He's also, arguably, putting up the most gorgeous shot chart ever. 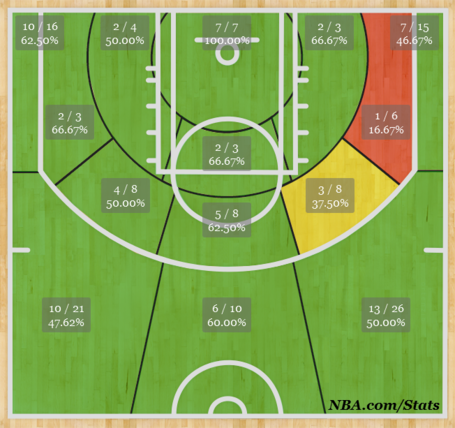 Green is good. A lot of green is very good. The shot chart Korver has painted is ungodly. It's the most oxygen field forest of a shot chart you'll ever find. It's the most nutrient-rich prairie of a basketball metric in the NBA. He's averaging 12.4 points per game on 71.6 True Shooting, per Basketball-Reference. Seventy-one point six True Shooting. His effective field goal percentage is 69.7. Is that even possible?

It seems impossible to shoot that well from the floor and record such improbable advanced metric and raw stat numbers, but so did hitting a three-pointer in 90 consecutive games. And Korver already tackled that obstacle. How far can he go? At this rate it feels like forever.