The Wizards could actually be a really good team ... if they just had a couple more decent players.

Share All sharing options for: Bench woes sinking the Wizards

With the Washington Wizards trailing by 13 at halftime Friday night against the Milwaukee Bucks, head coach Randy Wittman did what you'd expect and leaned on his star guard, John Wall, to orchestrate the comeback. Wall did, forcing an overtime that the team eventually lost, partially the result of looking gassed after 48 minutes of action.

In that overtime Wall went cold, missing two shots and turning the ball over once as the entire team matched his struggles. It's easy to see why: he played every single minute of the second half. He does a lot when he's on the court. He was plain tired.

For anyone who's watched the Wizards lately, this is nothing new.

Wittman has been riding his starters hard this season. It's because he doesn't, and probably shouldn't, trust the guys sitting on his bench. As talented a core as Washington has assembled this season, its lack of depth may end up being its Achilles heel.

When the Wizards have four or five of their key guys -- Wall, Nene, Bradley Beal, Marcin Gortat, Trevor Ariza, Martell Webster -- on the court, they're probably the third-best team in the East. It's a little scary what happens when Wittman tries to depend on anyone else.

Here are the Wizards' top-four groupings this season, all featuring some combination of the above players, via NBA.com: 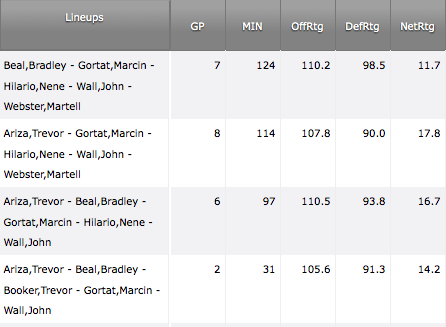 Look at those numbers! On the occasions when Wittman has all his guys healthy and able to play, the Wizards actually beat up teams pretty good. When Wall is on the floor with quality teammates, Washington plays like one of the best teams in the conference.

Unfortunately, Wall can't play all 48 minutes, even if he did play 48 in the loss to Milwaukee. And the same must be said of everyone else, particularly given the apparent injury-prone nature of guys like Nene, who's already going through his annual bouts of physical distress:

Like every other team, the Wizards need guys who can come in for spells and hold the leads handed to them by the starters. Instead, the likes of Eric Maynor, Jan Vesely, Garrett Temple, Al Harrington and Trevor Booker have been terrible. All five have net ratings of minus-12.6 or worse this season, per NBA.com.

Maynor in particular has become almost unplayable: his net rating this season is minus-29.1. When he's been on the court, the Wizards are getting outscored by 29 points per 100 possessions. His two-year deal, signed on the first day of free agency using the team's bi-annual exception, looks like a complete disaster. It's hard to imagine how he'll last the entirety of this season with being buried on the bench.

All of this looks to be a huge problem. Right now, all six of the Wizards' core guys are playing 32.5 minutes or more per contest. Beal, who's sidelined by a stress injury to his leg, was playing over 40 minutes per game before his injury. Wall is nearly at 38, Ariza's at 36. That's a ton of minutes for a group of guys who have had injury problems in the past.

Because the Wizards are still building for the future, holding this tenuous line between "going for it" and waiting until the Wall-Beal-Otto Porter (remember him? he played Friday!) core reaches its prime, it's hard to say what they should do. The big move, trading a first-round pick for Gortat, was already made before the season even started.

What's left for the Wizards, frankly, is some hope and the scrapheap. In the past, guys like Maynor, Temple and Harrington have been useful parts of NBA teams. It's not unreasonable to suggest they'll play better as the season goes on. After 20 games, however, it's getting harder to wait and not consider the way it's impacting the bottom line.

It'll be hard to find upgrades outside of the organization, though. With CBA rules limiting what Washington can do, the options appear to be standing pat, offering the league minimum to a free agent (D-League?) after waiving someone or considering a trade, which would likely involve Ariza.

The D-League could be the best, or at least most simple, option. We've increasingly seen teams depend on the minor league for support in recent years -- the Spurs signed Malcolm Thomas last week -- and someone like DeAndre Liggins might be able to help. The 6'6 swingman has averaged 11.7 points, eight rebounds and seven assists in three games with the Tulsa 66ers this season and could be a nice, big guard who creates some offense for the Wizards while using his length on D.

As for trading Ariza, it's been bandied about in the Wizards online community. As good as Ariza has been this season -- he's probably been the team's third-best player behind Wall and Nene -- he's an expiring contract that hits free agent next summer. The team has Webster and Porter to fill minutes on the wings, making the possibility of swapping Ariza for a more varied group of assets an intriguing one.

But who would Washington trade Ariza to? The Bobcats are trying to win, right? Maybe they'd want Ariza for Ramon Sessions and Josh McRoberts, since Michael Kidd-Gilchrist is out for a while after breaking his hand. Probably not, though. Washington would probably need to get creative here, and that kind of thing hasn't typically been Grunfeld's strong suit.

More likely, the Wiz try to work through these issues in-house. The team finally has Porter in the lineup, not long after getting back Chris Singleton, so they'll actually have a healthy roster (for the most part ... dangit, Nene) for the first time this season. Unfortunately, neither of those guys can play point guard or center, and that's a central part of the team's problem:

So we'll probably see lots of Porter and Singleton, but Wittman still needs to figure out a way to limit his starters' minutes. He's getting to Tom Thibodeau levels here. I'm not sure he has the roster makeup for that -- it takes something special to hammer out 40 minutes for Thibs every night, like Luol Deng does. That's why he loves Lu.

If the Wizards can just find a couple more guys to play credible minutes, filling out a legitimate eight- or nine-man rotation, they could be the No. 3 seed in a weak East. They're that good when Wall is running the floor and doing his thing. If things stay the way they are, though, Washington probably is what it is: a middling, low-seeded team on its way to a brief postseason appearance.

• Garrison: Lakers can ease Kobe back into rotation