A showdown in San Antonio turned into a throw-down by the Pacers, the Heat were up to their usual shenanigans and Anderson Varejao had a good time getting under Blake Griffin's skin.

Saturday night was filled with moments that make the NBA great. Paul George took on the role of superstar for the Indiana Pacers, the Miami Heat are filled with shenanigans during games while in transition and after games during interviews, Blake Griffin snapped on Anderson Varejao who couldn't help but laugh, and a game-winner was provided by Monta Ellis.

Here's all of the action from Saturday:

The Pacers won in San Antonio for the first time since 2002, continuing to ride what has been an incredible season for Paul George. George scored a game-high 28 points on 9-of-14 shooting, dropping 17 in the first half to help the Pacers out of a 13-point hole. Indiana took the lead at the 2:03 mark in the second quarter and never looked back.

Your 18-2 Indiana Pacers, everyone.

The Spurs missed big man Tiago Splitter, who left after playing just over eight minutes due to tightness in his calf. The Pacers shot 53.5 percent from the field, striking from nearly everywhere on the court. Here's Indiana's shot chart on the night, notice the 63.2 percent around the rim: 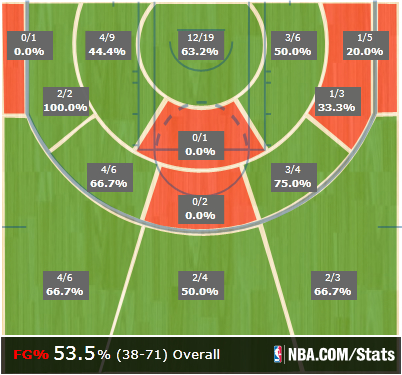 The Heat blew out the Timberwolves, who were without Kevin Love. LeBron James finished with a ho-hum 21 point, 14 assists, eight rebound line, just two rebounds shy from a triple-double. Oh, he also linked up with Dwyane Wade for one of the timeless sequences in basketball: the off-the-backboard alley-oop dunk:

The cost of one of those pretty dimes from Wade? A videobomb:

Someone had to clean the Wolves up off the floor, right?

Hey look, Andrew Bynum is doing things in consecutive games. He notched his third-straight double-digit scoring game, and his second 20 point, 10 rebound effort in three games in the Cavaliers' victory over the Clippers. Chris Paul dropped 13 points and 15 assists but it wasn't enough to overcome a brutal night from Blake Griffin. He went just 3-for-12 from the field and let Anderson Varejao under his skin (courtesy of cjzero, Twitterer extraordinaire):

And here's Varejao laughing the whole way on this one:

Monta Ellis has it all, including a game-winner over the West-leading Portland Trail Blazers. Damian Lillard drained a three to tie the game up with 1.9 seconds left, but Ellis responded with the shot to send the Mavericks home with a huge victory. Here are the two clutch shots, back-to-back, courtesy of Steve Noah:

Detroit lost their leading scorer due to knee soreness during the second quarter of this one, but still beat the Bulls by 17 points. It wasn't that Detroit was putting on some sort of clinic -- they shot 42 percent on the night -- but Chicago's offense was u-g-l-y.

They scored a total of nine points in the third quarter and shot 33 percent as a team through the game. But, hey, there was at least this dunk from Taj Gibson?

No Ty Lawson, no problem. It wasn't quite smooth for Denver but they survived playing without their leading scorer. They needed a big push from Jordan Hamilton in the fourth quarter to overcome Philadelphia. He drained three straight shots from deep in the fourth to help the Nuggets outscore the 76ers 26-15 in the final frame.

Michael Carter-Williams was also unavailable, but Tony Wroten had a solid 20-point game in his absence.

The two teams at the bottom of the Western Conference needed overtime to single out a winner. The Kings outscored the Jazz 15-5 in overtime, led by Isaiah Thomas' six points. Yes, he outscored the Jazz on his own during "free basketball" time.

He finished the night with 26 points. DeMarcus Cousins dropped a game-high 28 points.

The Brooklyn Nets aren't doing so great, but they beat the Milwaukee Bucks and we saw that superb line from Saturday night, Brook Lopez. 11-of-13 shooting for 32 points is a job well done for Brooklyn's franchise center.

• Garrison: Lakers can ease Kobe back into rotation