Knicks need to keep on shooting, and James Harden needs to defend better

In Monday's Hook we look at whether the Knicks have gotten too gun-shy from beyond the arc, James Harden's defensive flub that may have cost the Rockets a game and the Lakers' lucky stars.

Share All sharing options for: Knicks need to keep on shooting, and James Harden needs to defend better

The New York Knicks went 21-9 over the first two months of the season and, after Sunday's home loss to the Clippers, have gone just 11-8 in the New Year. A team that looked like a potential top seed and legit challenger to the Miami Heat is now at serious risk of conceding home court advantage in the first round.

So much of what fueled the Knicks' wild run to start the season was incredible three-point shooting. New York hit 42 percent of its threes in November, 37 percent in December and slightly better than 36 percent since January began. That's a big difference, certainly. But the lower proficiency made me wonder if the Knicks elected to go away from the record-threatening pace at which players were heaving those bombs. 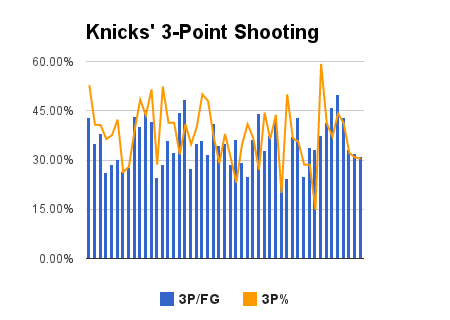 The blue bars represent the share of all Knicks' field goal attempts that were threes by game. The orange line is the team's three-point shooting percentage. You can see that during what would be mid-January there's a trough in attempts even though the most noticeable trough in conversion of those shot came back in late December early January. So whether the Knicks are hitting their shots doesn't seem to have a huge impact on how frequently they heave them. Many more factors likely to precedence on a game-by-game basis: whether Steve Novak is getting minutes, the margin, how J.R. Smith is feeling, who is matched up on Carmelo Anthony.

The Knicks have lost two of three during a real shooting drought. It'll be interesting to see whether Mike Woodson pushes his team to get back to firing up more threes as we roll through February. The Knicks seem far more dangerous when shooting with reckless disregard.

James Harden is a very deserving All-Star, but if you needed any reminder that his defense is in bad shape this season, look no further than the end of the Rockets' loss to the Kings in Sacramento on Sunday. The Rockets trailed 108-107 with 92 seconds remaining. Harden had turned over the ball on a reckless drive, but Houston got back on defense to prevent a layup. So Sacramento ran its halfcourt offense, which at the end of games consists of dribbling a bit until the shot clock gets low then firing up a pull-up jumper from roughly 17-26 feet. This is exactly how this possession went, and John Salmons ended up with the ball on the left elbow extended with two on the shot clock.

Harden was apparently stunned that at that point Salmons would fire up a shot, and blatantly smacked the Kings player's elbow, resulting in three free throws, all of which Salmons hit to give Sacramento a huge advantage in the final minute. The Rockets got no closer than within two before losing.

Why was Harden guarding against penetration as the shot clock winded all of the way down? Because, in my opinion, he's less confident of his ability to slow a driving opponent than he is in his ability to challenge jumpers. The thing is that the Kings had been shooting threes all quarter long; only Isaiah Thomas had been attacking the rim. Harden may simply be being asked to do too much at this point. When you're tired, it's much easier to hang back a little than to body up. He'd played 40 minutes and had 25 shooting possessions.

Harden is smart and has good athleticism. He can eventually be a plus defender if he works at it. But at this point, adjusting to such a major offensive load has to be wearing him out. Until Harden gets fully comfortable working on both ends, Houston going to have to hide him a little bit.

That's the Lakers' saving grace this season: the bottom of the West bracket has quietly become a bit soft. The Rockets are on pace for a 43-39 season. In the NBA's last full season, the No. 8 seed finished 46-36. That pace through 53 games would be 30-23, and the Lakers (24-28) would be 5.5 games back with two games to go before All-Star Weekend. In reality, the Lakers are only 3.5 games back.

Even in squalor the Lakers have all the luck.