The Denver Nuggets young big man made his presence felt in the Rising Stars Challenge and now looks to turn more heads in the Slam Dunk Contest on Saturday.

While the box score for the 40-minute game exposes the all-star style of play employed (see: option to play defense rarely exercised), Faried emerging as the MVP was a bit surprising considering this type of game normally highlights flashy guard play.

There were plenty of highlights from the young guards with Kyrie Irving and Brandon Knight dueling, and Isaiah Thomas lighting it up from behind the arc. But Faried was a force at the rim as he powered his way to 40 points with dunk after dunk after dunk. Oh, and he did drain one three-pointer just to flash a little versatility. The evening created a shot chart George Karl could only dream of seeing in a regular season game. 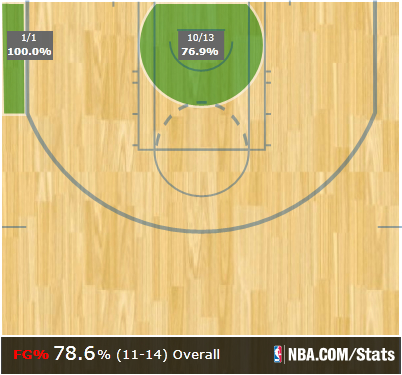 It is hard to tell which is more amusing - the sight of that shot chart or the fact that the shot chart exists in the first place. Regardless, it does cut to the chase with Faried's successful showcase in the Rising Stars Challenge.

Now the dynamic Denver forward will try to surprise NBA observers once again with his effort in the Slam Dunk Contest on Saturday night. As a power dunker, most expect Faried to fall by the wayside as high-flyers James White and Gerald Green add their flair in the air.

For Faried, that just sets up a scenario similar to his MVP chances in the Rising Stars Challenge. Energy and effort are always surefire ways to overcome minimized expectations. No doubt Faried will represent himself and the Nuggets well in the spotlight on Saturday night.