Terrence Ross is Slam Dunk champ, Kyrie Irving is way too good to be true, 2 Chainz is more inescapable than ever, and another All-Star Saturday Night is in the books. I watched it all in Houston, and because this is the internet, there could be no better way to document than with some good ol' fashioned power rankings. We begin with the worst and work toward the best.

500. The Dunk Contest. The poor, poor dunk contest. Every year the dunk contest is just an excuse for everyone to come out and say "KILL THE DUNK CONTEST" and 2013 was no exception. If you think all those misses were bad on TV, it was twice as uncomfortable in the stadium, where we couldn't escape or change the channel or guzzle bleach. It may be time to kill it once and for all, I don't know. But whatever the NBA does -- they will never kill it -- we need to at least put a limit on misses. There are a lot of problems with the dunk contest, but that's number one, and it's by far the easiest to fix. Tell everyone going in they've got three tries and that's it. This all started with Nate Robinson like 8 years ago, and it's been sucking the life out of dunk contests ever since.

If a player needs 10 tries to get a dunk right, HE SHOULDN'T GET A 10. Anyway, let's all purge the Saturday memories and read Sports Illustrated's Oral History of the '88 Contest in Chicago.

20. Macklemore. Apparently he's a rapper? Who opened All-Star Saturday Night with a Foot Locker-sponsored rap video about the NBA? I'd seen his name on Twitter but never knew who he was. Now I understand all the scorn. I wanted to set the Jumbotron on fire on Saturday.

19. The D-League Dunk Contest. I went to this with Chris Ryan from Grantland, and we both had high expectations here. Because if you're a D-Leaguer, don't you pull out all the stops for a dunk contest at All-Star Weekend? It's the one chance you have to get on everyone's radar, there's nothing to lose, so why not go nuts? We were wrong. Three of the four players looked like the hadn't even practiced or even come up with ideas, there were no insane props, and ... no. Congrats to Tony Mitchell from the Fort Wayne Mad Ants for winning it, but otherwise it was full of all the excruciating silences we came to know and love later Saturday. Instead of a cooler, indie version of the NBA's over-hyped counterpart, this one was somehow even more painful. DOES AMERICA HAVE A DUNK CONTEST PROBLEM?

(I would buy that issue of Time magazine.)

18. The Saturday Night Knicks. We all had high hopes. Steve Novak would win the three-point contest and do his belt celebration, then James White would arrive a few minutes later to save the Dunk Contest. But we were foolish. We were led astray. Novak clanked his way through a quick loss, and James White couldn't deliver on the hype that came with 10 stewardesses and a decade's worth of urban legend about his dunking. Our hopes were dashed, our fears realized. It's all over now. There's no going back to change the past. All we can control is the future and do everything in our power to put J.R. Smith in both the dunk contest and three-point contest next year.

17. Drake. Terrence Ross plays for the Raptors, Drake's from Toronto, so he stood up for pretty much the entire dunk contest and tried SO HARD to show everyone how hard he was repping his hometown. At one point he started counting money, because I guess he wanted everyone to know he was betting on it?

With any other rapper this might have been cool, but alas ... 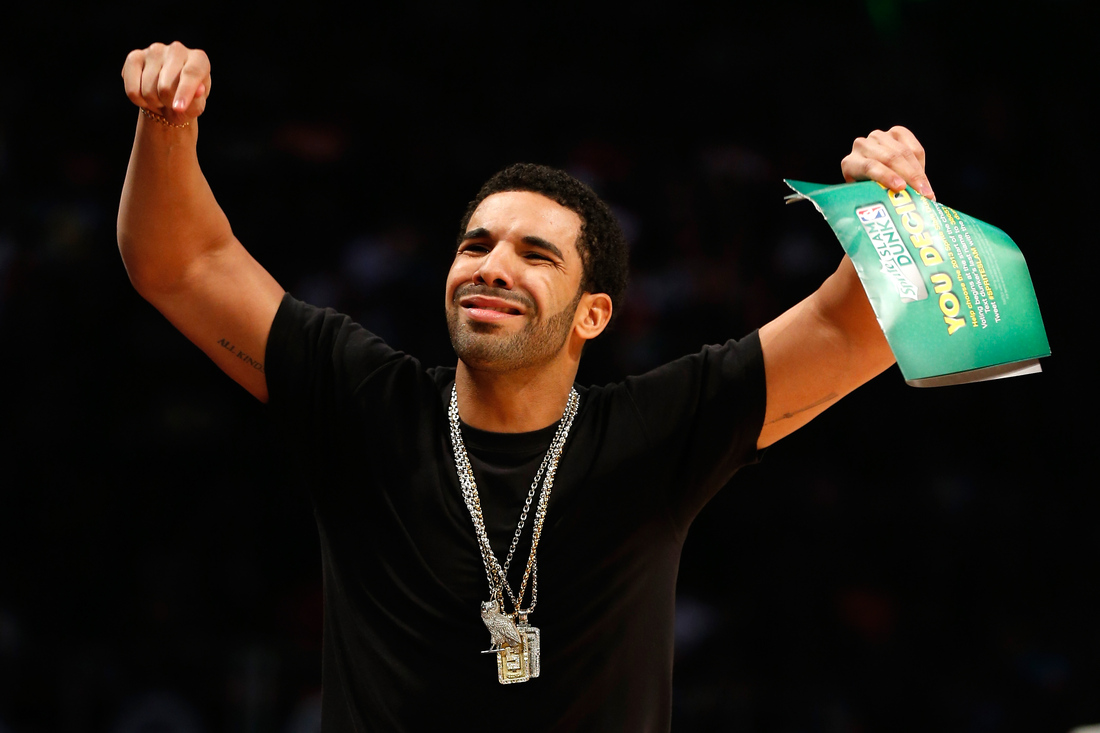 (Random memory: Before the dunk contest started Drake stood up carefully took off his chains, removed his gigantic watch, and handed it all to a bodyguard sitting next to him. Then he took off his sweater, handed it to the bodyguard, and took back all the jewelry. It was like a scene out of Downton Abbey with Lord Grantham and Bates.)

(NOTE: We need a companion to Downton all about rappers and their entourages.)

Well it's inflatable musical chairs in these streets and G-WIZ IS OUTCHEA REPPIN. 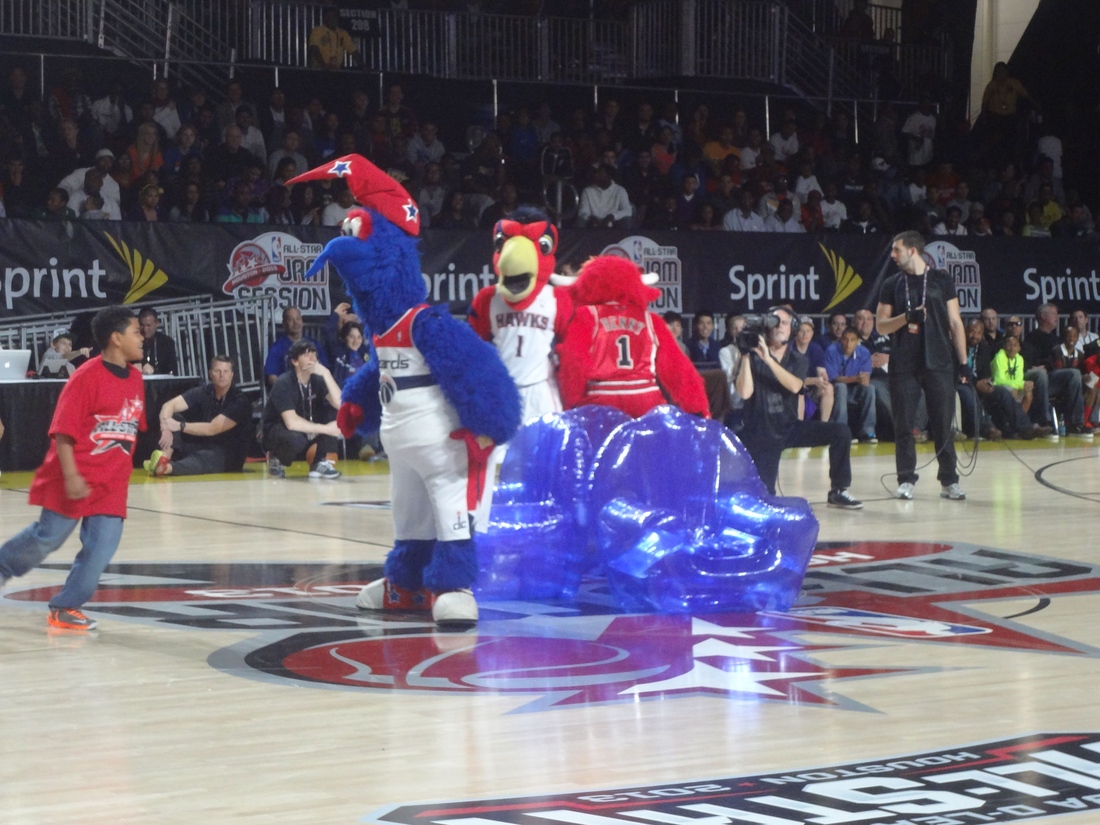 14. Nick Cannon. We gave the NBA a hard time for choosing Nick Cannon to host, but hey he was actually pretty solid. Nothing spectacular like letting Gary Payton talk shit to everyone for three hours, but not the disaster everyone feared. There was only one segment with Kevin Hart, and even THAT was pretty good. After Saturday, Nick Cannon's cool with me.

13. Ellie Goulding. Oh you thought we were gonna make fun of another inexplicable NBA music choice? NOT THIS TIME. Because "Lights" is awesome. And so is "Anything Could Happen." Fuck the haters.

12. Brent Barry. Did you know that Brent Barry cut his Slam Dunk trophy in half and on Friday everyone on NBA TV was eating Doritos out of it?

It's Brent Barry's world, we're all just livin in it.

11. Gregg Popovich, American Hero. Someone asked him about Matt Bonner's three-point chances Saturday. The answer, via Matthew Tynan at Pounding the Rock:

"You mean the Red Mamba? He doesn't go by 'Matt' anymore. He's gotten a little full of himself. He's the one guy on our team, I'm not sure he fits anymore. This social media thing has turned him into some sort of an icon and I'm not sure we can handle that. That's not who we are. He's in a little bit of trouble, so he better win the contest."

"Is Matt nervous? That's like, 'Is the sky blue?' He lives nervous," he explained.

Tony Parker added that Bonner should probably drink two beers before the contest to calm the nerves. Factor in Bonner's mustache, his New Balance basketball shoes, this Paul Flannery piece ... The Spurs are quietly the funniest team in the league.

10. Terrence Ross. For all the shit people will talk about the dunk contest this year, he was pretty awesome, right? He nailed almost all of his dunks on the first try, he didn't use any insufferable props ... Terrence Ross deserves more love than he's getting for all this. With that said...

9. Vince Carter. From a segment where all the All-Stars remembered past Dunk Contests: 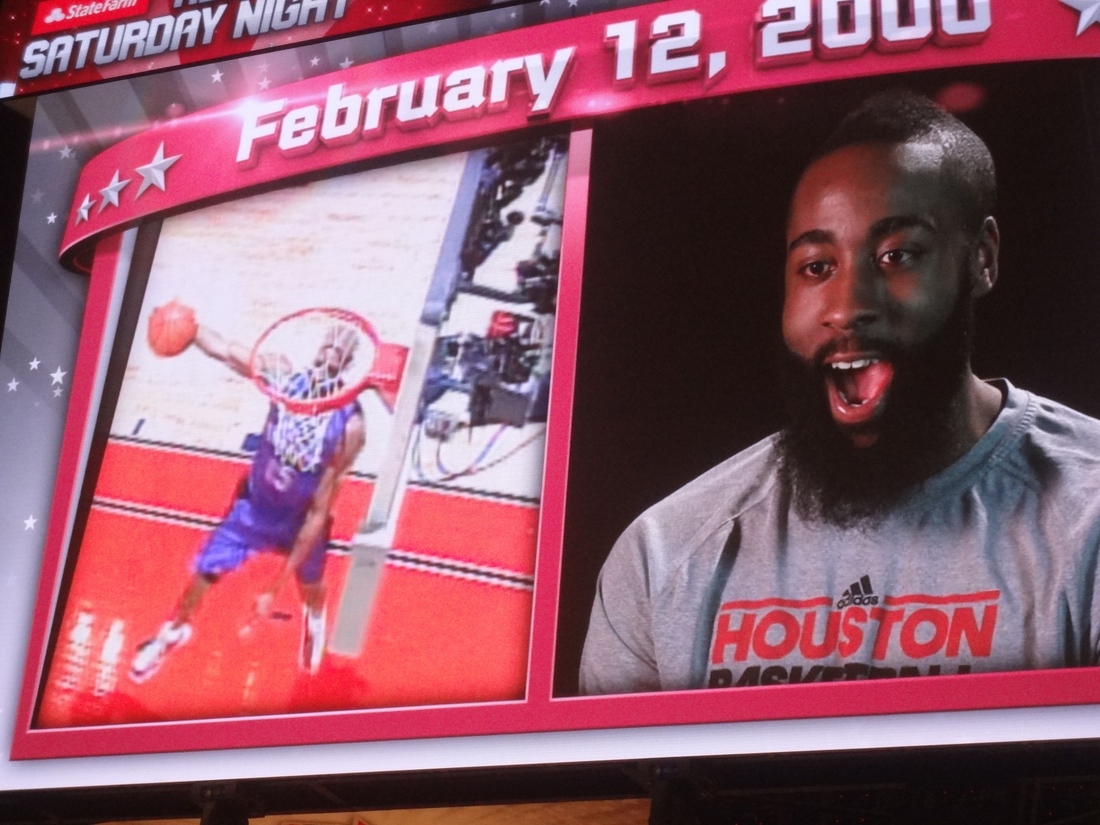 Every year the dunk contest tanks, it makes us appreciate Vince a little more.

8. Ahmad Rashad. I decided to sit in the crowd for the Dunk Contest and somehow wound up sitting right next to Ahmad Rashad. But ... I did not realize it was Ahmad Rashad. So I'd been sitting there for a few minutes when Puff Daddy walked up the stairs and then, as he walks by, he stops to say whattup to this anonymous middle-aged black dude I'm sitting with. They caught up for a solid three minutes while Puff stood in the aisle. When he finally moved on I looked over, saw the hoop earring to confirm his identity once and for all, and thought, "Damn, did not know Ahmad Rashad still had that kind of clout!"

7. Dikembe, Yao and Hakeem. All three were in the building Saturday night to judge the Dunk Contest, and all it did was remind us that we need more Yao, Dikembe and Hakeem in our lives. Somebody should make them start a podcast where they discuss NBA basketball and world affairs for an hour every week. We need to know what Dikembe thinks of the Russian meteor. 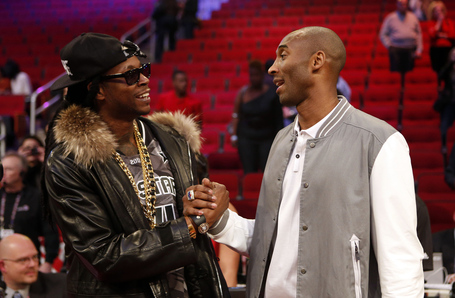 Last year I found out who 2 Chainz was when I overheard LeBron yelling "2 Chainz!" over and over again in the hallway at All-Star Weekend. Twelve months later, 2 Chainz has endorsement deals, cameos on 2 Broke Girls, he's featured in 10,000 different songs, he's performing with Fall Out Boy, and now apparently he's friends with Kobe? We're three years from Tity Boi getting elected President.

5. LeBron James. He wore leather pants and a sweatshirt with leather sleeves Saturday night, looking like Eddie Murphy in 1983. And when you think about where he is right now, that's kinda perfect.

4. NBA OFFSPRING. THERE WERE SO MANY ADORABLE KIDS ON THE SIDELINES. I don't know why everyone decided to bring their kids this year, but it needs to become a tradition every year. From KG to Chris Paul to Kobe to Tyson Chandler, they all had awesome little kids hanging out on the sidelines all night. If there were more pictures available there would have been a separate power rankings of superstar children.

But who are we kidding Carmelo's son is obviously the winner there: 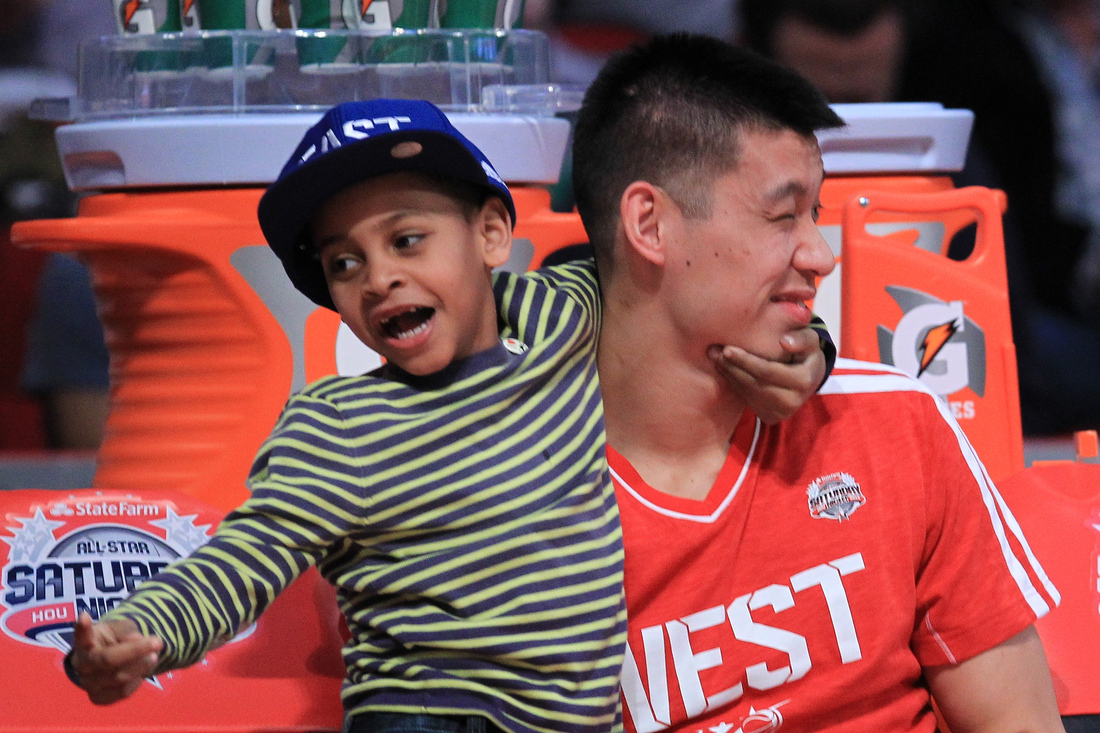 3. David Stern. In his last "State of the League" address at All-Star Weekend, he spent a half hour holding court before 200 reporters, and made it look easier than ever. He answered 10 different questions about the Kings/Seattle situation, gave a perfect response to PED concerns, and kept us captivated the whole time. Even if half of it was empty rhetoric with Stern's charming dickishness splashed in here and there, it was all pretty perfect. We'll talk about what he said later this week, but Saturday it was just good to see him up there.

A year ago in Orlando he looked tired, disinterested, and he let Adam Silver handle most of the questions. As we walked out of that press conference a reporter said, "He really might be on the way out ... I've never seen him like that." This year we know he's really going, and Saturday was one more reminder that we'll miss him when he's gone.

2. Kyrie Irving. It's getting ridiculous. Really. 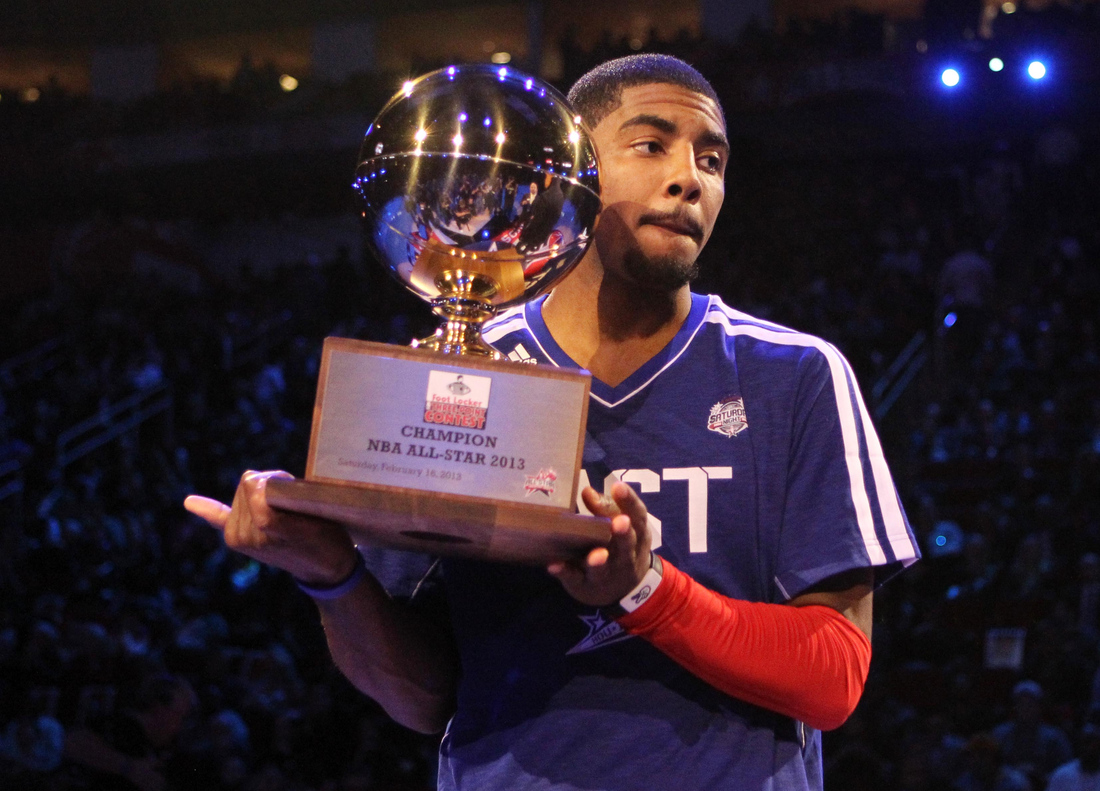 1. William Wesley. We have no idea how Worldwide Wes spent his Saturday Night, but Worldwide Wes should always be number one on any NBA Power Rankings list.