The New York Knicks have lost four in a row and they're searching for answers, trying to figure out how to be the team that stormed through the league for the first six weeks of the season.

TORONTO -- "It is not a great feeling right now," Amar'e Stoudemire said, putting it lightly. A few minutes prior, the New York Knicks big man sat alone at his locker, hands clasped, head down.

With a 100-98 loss to the Toronto Raptors on Friday, the Knicks have dropped four straight. But it feels like more than that. Thanks to the All-Star break, it's been two weeks since their last win. They're still sitting at 32-20, good for third in the Eastern Conference but only 2.5 games ahead of the sixth-place Atlanta Hawks. Mid-December and 18-5 were many moons ago.

No one in New York's locker room thinks this is a .500 team, so don't tell them that's exactly what it's been over the last 10 weeks.

"We're still alive, we've still got a heartbeat," said Knicks guard J.R. Smith. "It's just a matter of do we get off that bed or not."

Smith scored a superb 19 points on 12 shots in Toronto and 26 points on 17 shots when those same Raptors beat them at Madison Square Garden nine days prior. Exemplifying his team's inconsistency, Smith shot a combined 2-for-16 in the other two games on this losing streak.

The Knicks were up and down at the Air Canada Centre. They scored 18 points in the paint and seven fast break points in the first quarter but Toronto kept pace. In the second and third combined, they had six paint points and two on the break. Toronto forward Rudy Gay had three more field goals than New York did in the third quarter and the Knicks faced a nine-point deficit and an uphill battle going into the fourth. Despite center Tyson Chandler's foul trouble, they fought back and tied it just over five minutes into the final frame. Too many times in the final minutes, though, they took contested jumpers instead of moving the ball or working for something better. They forced the Raptors to take tough shots but Toronto made enough of them to win.

"We didn't quit," said New York head coach Mike Woodson. "We kept playing and we had our chances to make plays down the stretch but I just thought we settled. Those threes, sometimes they look good but we had an opportunity where we could have [driven] the ball and maybe got smashed and went to the line and make free throws. We gotta take advantage of that and we didn't." 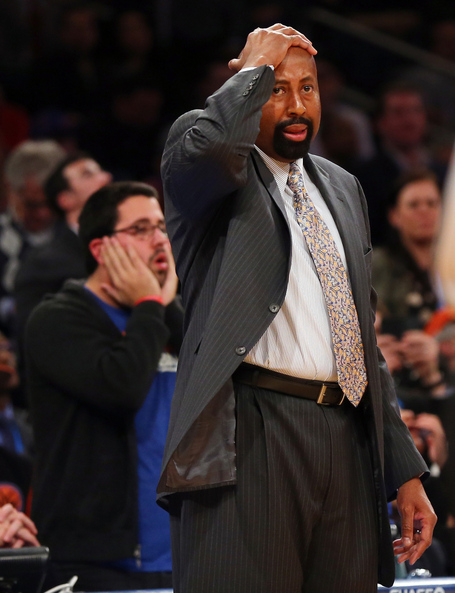 "Honestly I think we're a better team when we push the ball, run the ball up the court," said Smith. "That's how we got the lead and down the stretch we started walking the ball up."

The positive is the Knicks played like a desperate team to start the fourth. The problem is that it had to get to that point. "Whenever we play like we have the lead, it's not a good look for us," Smith said. "We gotta play like we're down all the time and just keep pushing."

A day before the game, forward Carmelo Anthony said the slide was about energy more than strategy. "Guys gotta want to give their effort, they gotta want to be out there trying to win," he said. "It starts with me, I'll take that on my shoulders. Me being a leader of this team, if I'm giving the effort then everybody [will] fall in place and follow suit. If I gotta hold myself more accountable, then I'll do that."

Anthony gave a better effort than he did in the two previous games, at least on offense. He tied Gay's game-high 32 points and made 11 of his 24 field goal attempts. In Wednesday's embarrassing 125-91 loss in Indiana, he scored 15 points on 7-for-21 shooting. In the first loss to Toronto, he had 12 and shot 5-for-24, though he played through numbness in his arm. His help defense, shot selection and 1-for-8 three-point shooting on Friday warrant criticism but there is plenty of blame to spread around.

Iman Shumpert has scored 16 points on 5-for-26 shooting in the past six games and Jason Kidd has 27 points and 40 shot attempts to his name in the month of February. Both are in the starting lineup, holding back an offense that looked unstoppable earlier in the season. To try to recapture what was working, Woodson might have to tinker with his first five.

The Knicks might not again soar to the heights they did at the outset of the season but they're too talented to stay sinking. It's likely they're somewhere in between the cohesive club that couldn't miss and this temperamental team that can't be counted on. There are less than two months left in the regular season and it's up to New York to determine how it will be remembered.

"I think that's something that we're still trying to figure out," Anthony said after Thursday's practice. "At the first 20-something, 30 games we had one identity, then it seemed like the last couple weeks, three or four weeks, we came down with another identity."

"We just gotta move the ball, make sure everybody touches it, everybody gets in a rhythm, everybody feel good about themselves and go from there," said Smith. "But it starts on the defensive end. When we get stops, we gotta go." 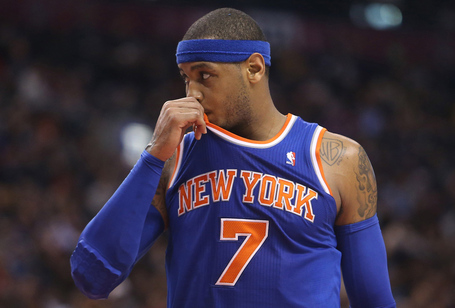 Heading into a back-to-back at home against the Philadelphia 76ers and Golden State Warriors starting Sunday, the Knicks can keep repeating what they've been saying over the last little while. The oldest team in NBA history, New York's veterans know none of it matters unless things change on the court. Inside the locker room, they're attempting to keep the losses in perspective.

"We have got to get over this hump," Anthony said. "We hit a bad stretch. We still have got to remain confident, remain positive."

"We're going back home. Just get our swagger back when we go back to the house, go back to our home, our building."

Getting the swagger back sounds so simple. For New York as of late, it's been anything but.