The Lakers' transition defense has been a problem all year, so a matchup against the league's best transition offense in the Denver Nuggets promised to be fun. In the end, it was.

Monday's game between the Los Angeles Lakers and Denver Nuggets was a battle between the league's best transition offense and its worst transition defense. It happened in high altitude with the Lakers on the second game of a back-to-back set. In other words: it wasn't exactly surprising that the Nuggets ran the Lakers out of the gym in a 119-108 victory.

Still, it was striking to see just how often the Lakers got beat down the court. Let's show you six of the seemingly endless Lakers breakdowns that allowed the Nuggets to gallop up the court for layups, dunks and easy shots.

(It should be noted throughout this piece that the Nuggets expose bad transition defense like no other team in the league. A fair amount of credit should go their way. But the Nuggets were only able to capitalize on those opportunities because the Lakers gave them the openings.)

Mike D'Antoni wants his teams to go for corner threes, as many coaches do. But the downside to this is that it's hard for players to get back on defense when they have to start running from the other team's baseline. Here's one instance where two Lakers get caught watching in the corners, leading to an obvious Nuggets fast break. 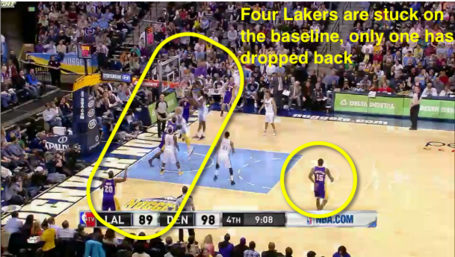 Steve Blake and Jodie Meeks are in the corners, Dwight Howard is going for a rebound as he should and Antawn Jamison is driving to the basket. If Jamison makes the shot, no huge deal. If he misses and Howard can't get the rebound, L.A. is in trouble. Two Nuggets wings are waiting to run, and only Metta World Peace is behind them. As we roll the tape forward, look what happens. 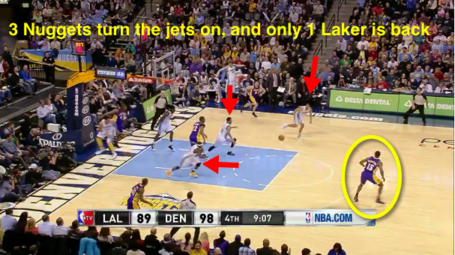 It doesn't matter how much Blake and Meeks hustle here -- they're not beating those three Nuggets players down the floor. As expected, Ty Lawson ends up getting a layup. 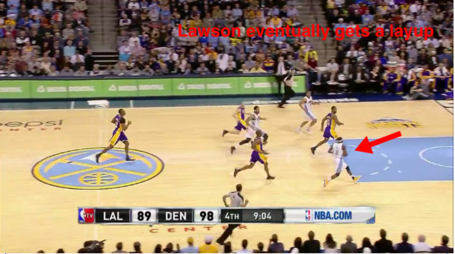 I can't blame any one Laker here. The play put them all out of position.

One of the biggest ways you can sabotage your transition defense is to go for offensive rebounds you're never going to get. Some might consider this good hustle, but there's a reason teams like the Celtics and Spurs insist their players get back. It's just not smart to jeopardize your retreat with an ill-timed offensive rebound try.

As an example, look at Earl Clark here. 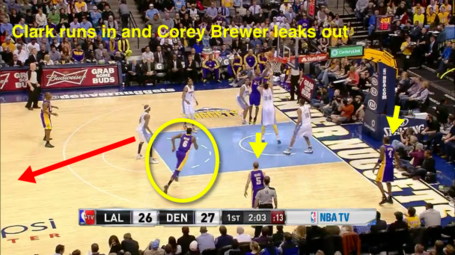 Just because you aren't being boxed out doesn't mean you should go for every rebound. On this play, there are four Nuggets around the hoop. If one of those four grabs the rebound as expected, the fifth, Corey Brewer, will leak out. Clark has to realize this and drop back to prevent Brewer from getting a fast break. Instead... 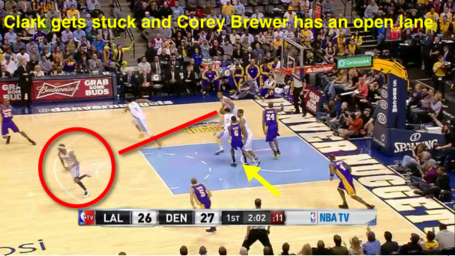 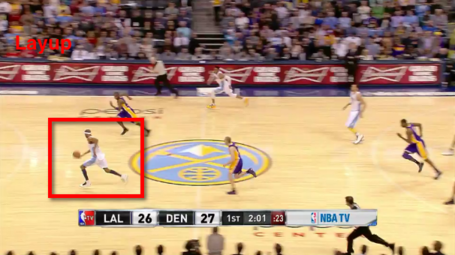 And that's why you don't go for offensive rebounds unless you're sure you can cover the break the other way.

This is the same idea as above. World Peace crashes the offensive glass and doesn't come up with the ball, setting up a 3-on-2 break that easily could have been avoided. 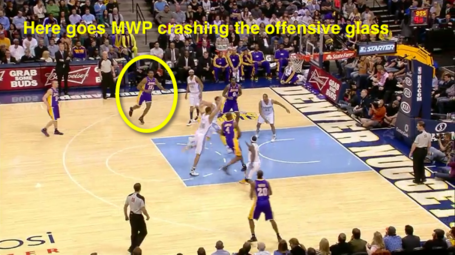 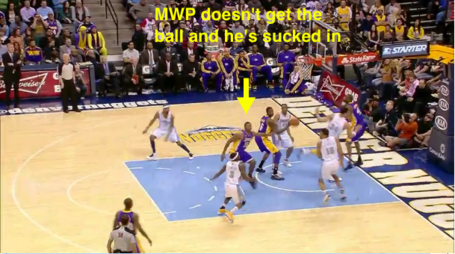 In World Peace's defense, this isn't quite as bad a gamble as Clark's was. Meeks, in the right corner, is also out of position, and if he drops back further, things would be better. But it's still not a good play, one that ends up costing the Lakers once Lawson starts sprinting ahead. 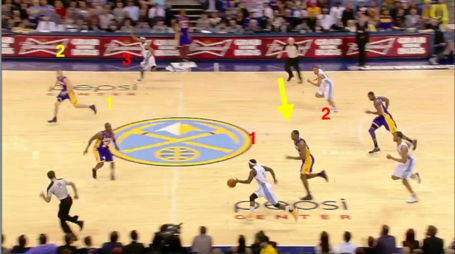 This turns into a break in part because World Peace hustles to the ball rather than to the middle of the floor. Credit MWP for running, but this also isn't smart. Lawson ends up swinging the ball to Andre Miller, who finds Brewer on the opposite side for a layup. 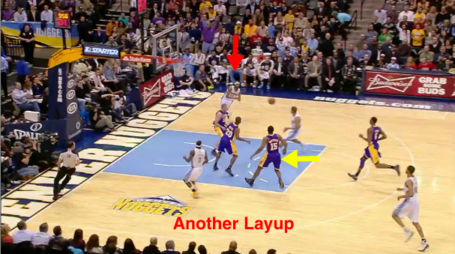 This is just terrible effort. Sure, Jamison gets stuck in the corner, but he takes forever to even start running back on defense. 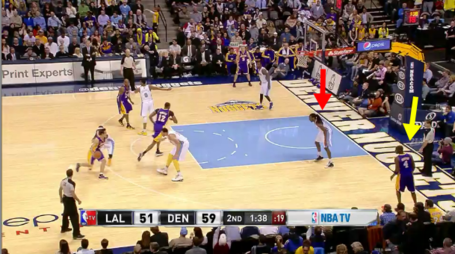 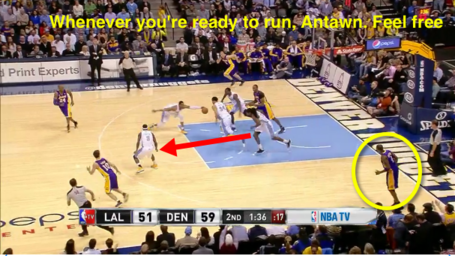 Meanwhile, Kenneth Faried, who runs harder than anyone in the league, gets ahead for an eventual layup. 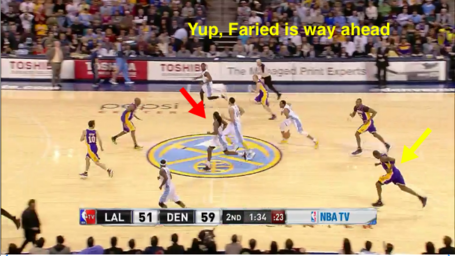 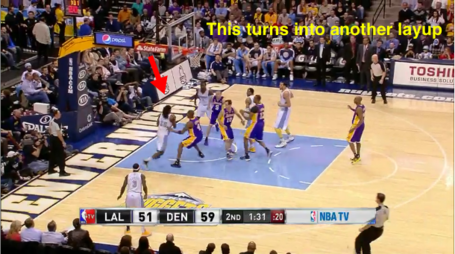 I guess Jamison was tired.

Kobe's transition defense has been bad all year, and there were a couple plays where his disinclination to get back cost his team. I'm only going to choose one, though. Watch Andre Iguodala outrace him to get a dunk in the third quarter. 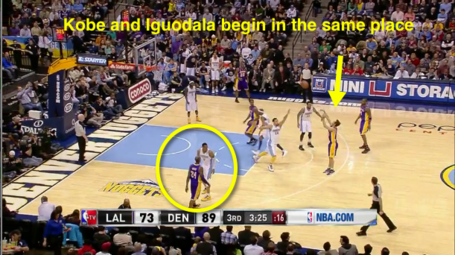 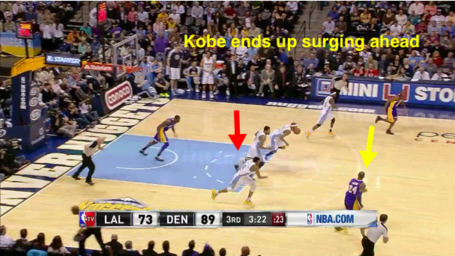 So far, so good, right? Not so fast. Kobe may be ahead now, but by not sprinting back beyond halfcourt, he leaves himself vulnerable to being caught and passed. That's exactly what ends up happening. 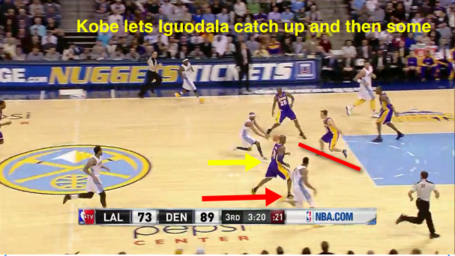 Brewer finds Iguodala going backdoor and Iguodala slams it down as Kobe watches. 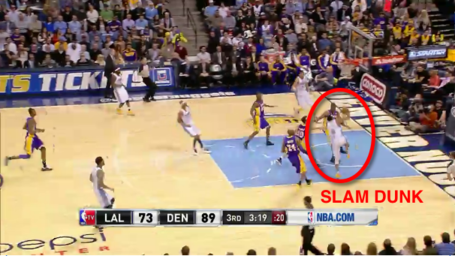 One thing to keep in mind: transition defense doesn't end when the immediate fast break is shut down. Once a team does that, they must properly match up to prevent their opponent from getting an open shot in early offense. On this play, the Lakers get back well enough, but a failure to match up leads to a wide-open three from Brewer. 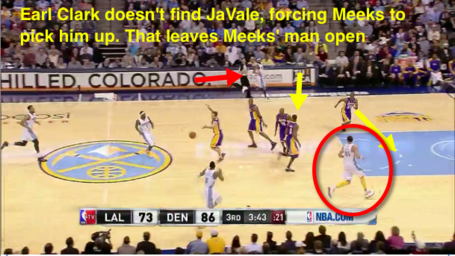 There's a lot going on here, but the root of the problem is Earl Clark (the first Laker arrow'd). While all five Lakers are back, Clark has not run to JaVale McGee, circled in red. Because of that, Jodie Meeks (the second Laker arrow'd) runs over to prevent the Nuggets from throwing a lob pass to McGee. In the process, though, he leaves Brewer wide open in the corner, and nobody goes to pick him up. 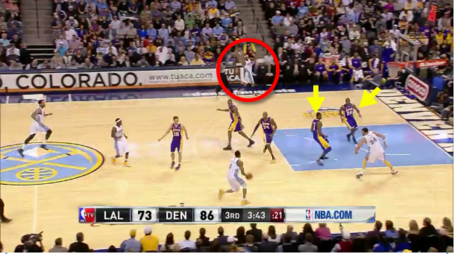 Clark compounds the issue by running to McGee even when Meeks does, and that opens up the crosscourt pass. Iguodala has great vision, but this is a pass most wings can make. 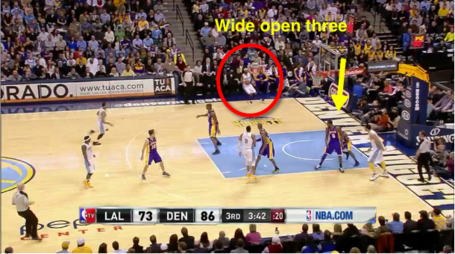 I think you get the point by now. To be fair to the Lakers, the Nuggets are almost impossible to hold down completely on the break when they play at home. On the other hand, there were also a half a dozen other examples I had to cut to fit just six into this piece.

Until the Lakers solve their transition defense -- and with this little time left, I don't see it happening -- they're not a playoff team.

• Dwyane Wade's nickname is awful, but our suggestions are worse

• The Lakers are finally winning, and they still aren’t that great