Dennis Rodman is touring North Korea on a diplomatic mission

Because life is great.

Share All sharing options for: Dennis Rodman is touring North Korea on a diplomatic mission

Nobody woke up this morning expecting to read a story from the Associated Press' Pyongyang bureau about Dennis Rodman traveling through North Korea to promote "sports diplomacy", but here we are.

Rodman is joining three members of the Harlem Globetrotters basketball team and a VICE correspondent for a news show on North Korea that will air on HBO later this year, VICE producers told The Associated Press in an exclusive interview Tuesday before they landed.

"It's my first time, I think it's most of these guys' first time here, so hopefully everything's going to be OK , and hoping the kids have a good time for the game," Rodman told reporters after arriving in Pyongyang.

Shown a photo of a snarling Rodman, piercings dangling from his lower lip and two massive tattoos emblazoned on his chest, one North Korean in Pyongyang recoiled and said: "He looks like a monster!"

But Rodman is also a Hall of Fame basketball player...

There's so much more, too. Did you know that Kim Jong-Un was obsessed with the Chicago Bulls growing up? Did you know North Korea is home to a 7'9 basketball sensation named Ri Myong Hun, who changed his name to "Michael" during the 1990s?

Well now North Korea's home to Dennis Rodman, too. At least for the next few days and possibly forever, because that would actually make a lot of sense.

It's true, I'm in North Korea.Looking forward to sitting down with Kim Jung Un.I love the people of North Korea. #WORMinNorthKorea

They love basketball here. Honored to represent The United States of America. #WORMinNorthKorea

Is it unsettling that Rodman could "represent the United States of America" in North Korea and/or anywhere in the world?

But it's too late to stop this now so we should all just roll with it. There hasn't been a better Dennis Rodman story since he was DJ'ing that party in the Hamptons and left the wireless microphone on while he went upstairs to have sex with six women. Who knows what'll happen in Korea!

UPDATE 1:32 PM: This photo, because life is great. 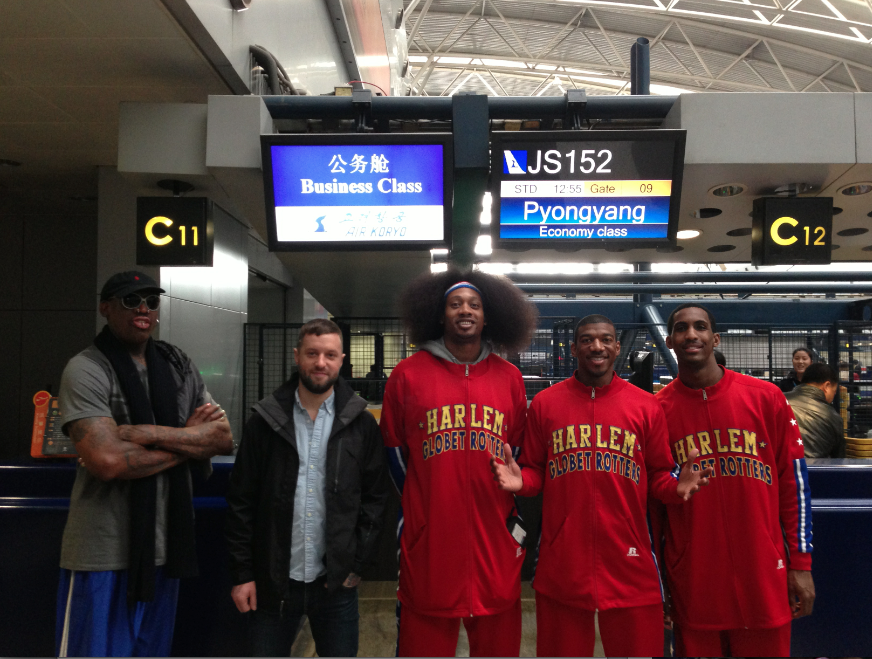 And the State Department has officially declined to comment on Dennis Rodman.

State Dept: We've not been contacted about @dennisrodman trip to North Korea. We have no position on the timing of this private travel.