Assessing the degree of difficulty of Stephen Curry's 54-point game

It wasn't just that Stephen Curry scored 54 points against the Knicks on Wednesday. It's that he did it on shots only he could make.

Share All sharing options for: Assessing the degree of difficulty of Stephen Curry's 54-point game

Those who missed Stephen Curry's 54-point performance in a Golden State Warriors' loss to the New York Knicks on Wednesday only see the numbers in the box score. As impressive as those are -- and they are impressive -- they don't really explain by themselves why Curry's game was so remarkable.

What was the most eye-popping thing about Curry's scoring, then? Just how difficult all these shots were.

Curry is shooting 45 percent from the field and 46 percent from three-point range this year, both absurd percentages for a guard, but he's not doing it on standstill open jumpers. No, Curry is taking threes off the dribble, off-balanced long bombs running off screens, flick-shot runners in the lane and dipsy-doo layups that allow him to overcome his slight frame. He essentially takes a set shot every time, allowing him to simply flick his wrists before defenders can close out on him. No player, save for possibly Steph's father Dell, has a quicker release. It allows Steph to hit more difficult shots than anyone should.

(He also passes incredibly well with either hand and can set up teammates when he is trapped, by the way).

As an ode to all those difficult shots, let's take a closer look at all 18 of his made field goals. 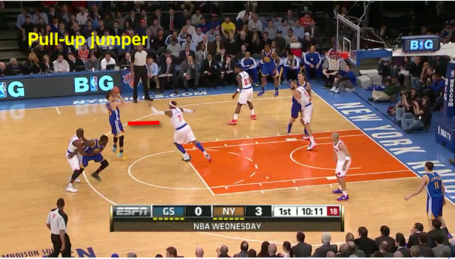 WHAT HAPPENED: Curry takes the ball up the court after a made Knicks hoop and takes little time to survey the court. Draymond Green runs alongside him, preparing to stop to set a drag screen to free Curry going left. This is a staple of Golden State's offense, and it works to perfection here. Curry goes left, and Carmelo Anthony forgets to step up to contain the best shooter in the league. Swish.

DEGREE OF DIFFICULTY RATING: 4 out of 10. 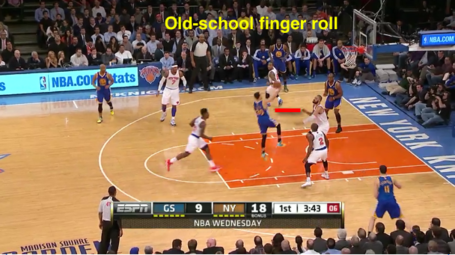 WHAT HAPPENED: Curry runs a pick and roll with Klay Thompson to force the switch, then feeds Thompson in the mid-post on the right side. J.R. Smith comes to double-team, so Thompson kicks it out to Curry at the top of the key. Iman Shumpert comes to help, but he's a step late. Curry ball-fakes a pass to Jarrett Jack on the left wing and Shumpert goes flying by, as pictured here. This opens a lane to the rim, but instead of driving all the way to the hook, Curry pulls up with a 10-foot finger roll to avoid the presence of Tyson Chandler. You can see that shot pictured.

DEGREE OF DIFFICULTY: 9 out of 10. Who shoots finger rolls anymore? 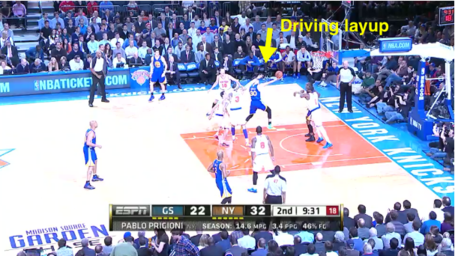 WHAT HAPPENED: A Pablo Prigioni missed three gives Curry the ball in semi-transition. Seeing a lane, Curry throws Prigioni a left-to-right crossover that freezes him momentarily. Anthony tries to plug the middle penetration, but it's too lane. Curry picks up his dribble at the free-throw line, steps right through the gap and again finishes with a finger roll before Amar'e Stoudemire can react. 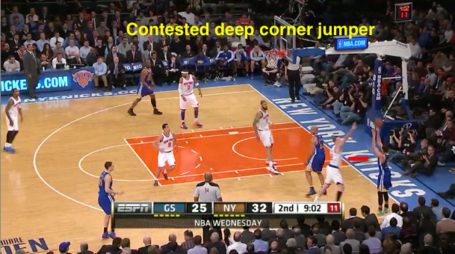 WHAT HAPPENED: Jack and Carl Landry run a wing pick and roll on the left side. The Knicks trap Jack, forcing him to give it up to Landry on the wing. At that point, both Prigioni and Anthony run to cover Landry, leaving their men open in the opposite corner. Landry's pass to Curry is off target, but the Warriors' sharp-shooter recovers and hits from right in front of the sidelines as Steve Novak closes out hard on him.

DEGREE OF DIFFICULTY: 7 out of 10. Corner threes are easy, but throw in the bad pass and the hard closeout, and this is way tougher than it looks.

Shot 5: In your face, Pablo 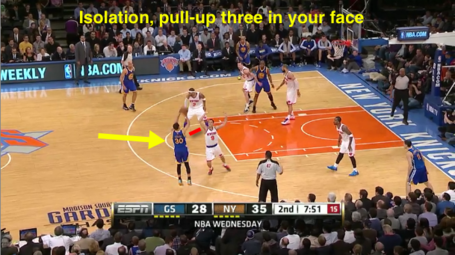 WHAT HAPPENED: Pretty simple. Curry walks up to the three-point line and shoots a three in Prigioni's face.

DEGREE OF DIFFICULTY: 8 out of 10. This was a heat check that worked. 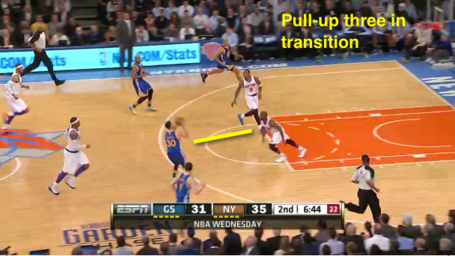 WHAT HAPPENED: The first of two Curry PUJITs (Pull-Up Jumper In Transition). Curry gets the ball after a Knicks turnover, chops his feet beautifully to balance himself right at the three-point line and hits. 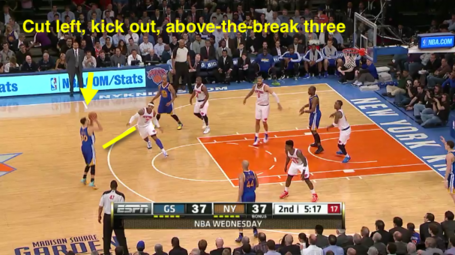 WHAT HAPPENED: Jack dribbled it up the floor and probed the defense in a semi-transition situation. Jack dribbled left on Felton and was just about ready to pull it out to run a half-court set. Instead, though, Curry noticed Anthony ball-watching and sneaked open right at the top of the key. Jack noticed, hit Curry with a pass and Curry found a way to balance himself despite drifting right and nail the shot. 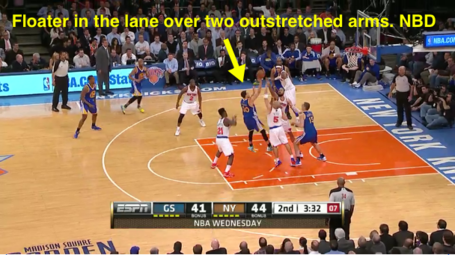 WHAT HAPPENED: Curry caught the ball curling left and dribbled into an opening. As expected, the Knicks covered quickly. Jason Kidd angled Curry towards the middle, where Shumpert was supposed to plug the gap. Instead, Curry jump-stopped and got just past Shumpert to give himself an opening. At that point, Chandler came over and threw his 7'1 frame into Curry's vision, but it wasn't enough. Even with Kidd also recovering, Curry had enough to float the shot over two defenders.

DEGREE OF DIFFICULTY: 10 out of 10. Think this is self-explanatory. 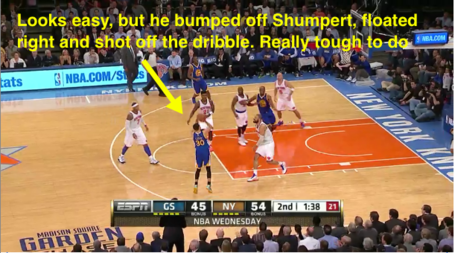 WHAT HAPPENED: It's hard to show this shot in one picture, but this was incredibly hard. The Knicks scored, and the Warriors threw it in quickly to Curry advancing up the floor. Shumpert tried his best to hustle back, but Curry pulled a Chris Paul trick, running himself into Shumpert to cut off the angle. Shumpert recovered nicely enough to at least position himself on Curry's hip rather than his backside, so Curry calmly bumped Shumpert off his path, threw an inside-out dribble to create even more space going right and rose up for the open mid-range jumper.

DEGREE OF DIFFICULTY: 9 out of 10. This picture doesn't do this shot justice. Almost nobody in the league is good at pull-up jumpers going right. The motion isn't as natural because you have to rise up with the same arm that you shoot with. Throw in the fact that Curry had to bump Shumpert off to clear space, and this is a move only a couple other players in the league can duplicate. 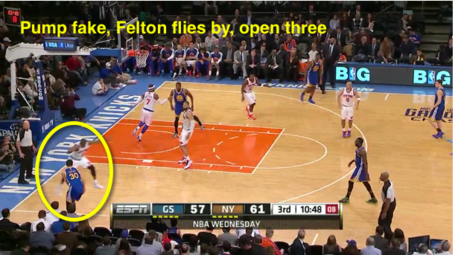 WHAT HAPPENED: The Knicks send a hard trap Curry's way on a side pick and roll and nearly force a turnover, but Curry was able to give the ball to Green at the elbow. At that point, both Felton and Chandler completely forget about Curry, so he darts to the left corner. Felton eventually notices, but he's so out of control that a simple Curry pump fake sends him flying into the second row. That leaves Curry wide open.

DEGREE OF DIFFICULTY: 2 out of 10, though I could see as high as six out of 10 if you consider the whole play (the trap, the cut, the pump-fake). 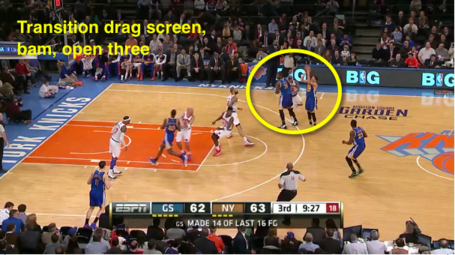 WHAT HAPPENED: Much like the first shot, Curry ran Felton into a transition drag screen and got himself an open look. This time, Festus Ezeli was the man who set it. Also different: Curry dribbled right up to Felton, froze him with an inside-out lefty dribble and timed it all perfectly with Ezeli's screen. 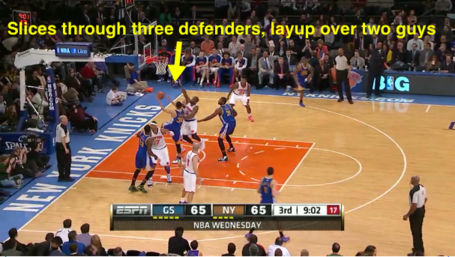 WHAT HAPPENED: Felton tried pressuring Curry at half-court, bumping him and getting right in his face. The result? Curry kept his lefty dribble low and tight, eventually getting by Felton going to the rim. None of the wings pinched in to protect the drive, and Chandler wasn't quick enough to contest the shot at the rim. With Felton still on his hip, Curry lofted a left-handed layup high off the glass and in.

DEGREE OF DIFFICULTY: 7 out of 10 when you consider the whole drive itself.

Shot 13: The end-of-quarter 'Are you kidding me' shot 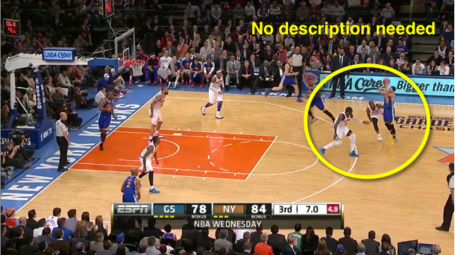 WHAT HAPPENS: Curry ran the shot clock down before trying to drive right on Felton. Felton cut him off, so Curry spun left and ran Felton into an Ezeli screen. The Knicks defended that well; Stoudemire, seeing the shot clock running down, stepped up very high to prevent the three, and Felton recovered quickly. It didn't matter. 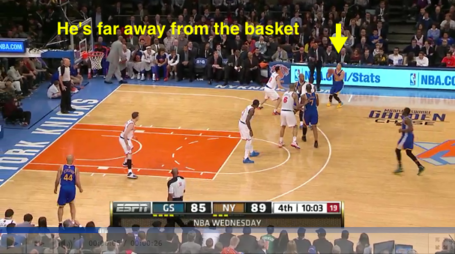 WHAT HAPPENED: Curry just pulled up from 30 feet. No big deal.

DEGREE OF DIFFICULTY: 10 out of 10. I'll let Mike Woodson explain. 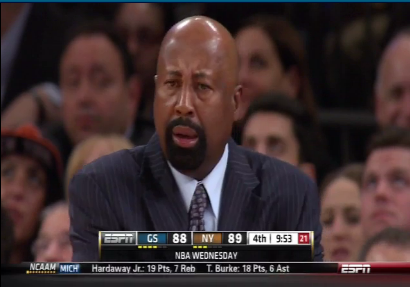 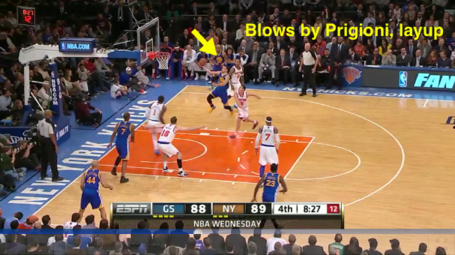 WHAT HAPPENED: A pick and roll forces Prigioni to switch onto Curry. Given Curry's shooting exploits, Prigioni gets right up into him. Curry responds by giving Prigioni a simple inside-out dribble to go right by him for the layup. 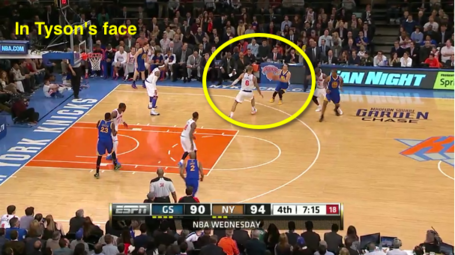 WHAT HAPPENED: The Warriors set up Landry to screen for Curry, but what matters here is how Curry sells the play. He starts by dribbling left, making it seem like the screen is coming that way, but just as Felton reacts, Curry dribbles behind his back to the right. By the time Felton reacts, he's been run into the screen. Chandler, knowing Curry's shooting, smartly steps up to cover Curry's wing three-pointer. It doesn't matter.

DEGREE OF DIFFICULTY: 9.5 out of 10 when you consider the move. 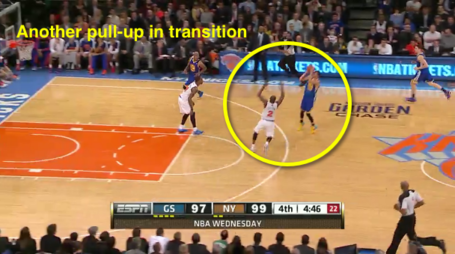 WHAT HAPPENED: Very similar to the previous one. This time, it's a blocked shot that triggers the break, but otherwise, you see the same footwork. Also different: Felton contests this shot a bit better than the previous pull-up three in transition.

SHOT 18: The three off the screen 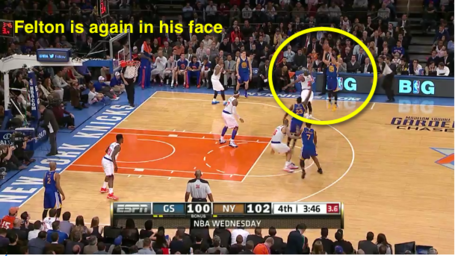 WHAT HAPPENED: The Knicks fall asleep on a sideline out of bounds play, allowing Curry to curl off a screen coming to the ball and get open. Of course, "open" is relative. To make this shot, Curry must catch the ball with his back to the rim, turn, balance himself and then fire from 25 feet away. He does, of course, even after Felton recovers from his lapse to contest the shot.

There you have it. The average degree of difficulty of Curry's 18 made field goals in his 54-point game was a 7 out of 10, according to my completely subjective rating system. Quibble with the numbers all your want, but this was no ordinary 54-point game.