Dell Curry on Stephen Curry's 54-point game: 'I was never in a zone like he was'

If anyone knows about hot shooting and Stephen Curry, it's his father, Dell. The elder Curry spoke to SBNation.com about what it was like to watch his son go off for 54 at MSG.

Share All sharing options for: Dell Curry on Stephen Curry's 54-point game: 'I was never in a zone like he was'

TORONTO -- Dell Curry knows about hot shooting nights. The Hornets' all-time leading scorer and one of the deadliest pure shooters in NBA history, he spent 16 seasons making teams pay for giving him the smallest sliver of space to get off his shot.

Watching his son, the Warriors' Stephen Curry, erupt at Madison Square Garden for 54 points on 18-for-28 shooting, 11-for-13 from behind the arc on ESPN? That was something entirely new. A day after the Stephen Curry Show, his father, now the Bobcats' color analyst, spoke to SB Nation about it:

It was amazing. I'm with the Bobcats, we flew in from L.A. yesterday so I got here [Salt Lake City] in time to see the second, third and fourth quarters which were his best. It was unbelievable. I kept waiting for him to cool off or miss and neither one happened [laughs]. It's unbelievable.

When did you start thinking this could be a really special game?

It was late in the third. Second quarter he had a couple of good pull-ups in transition, I thought ‘Okay, he's feeling good, he's on tonight' but with halftime you don't know whether that's going to continue or not. So it was somewhere in the third when I said, ‘Okay, he's got it going and it doesn't matter who's guarding him.' I mean, the pick and roll, you put [Pablo] Prigioni on him, he gets by him. Even [Raymond] Felton, he's a capable defender, he got him in the air a couple of times, drew a foul, so everybody had to ease up because you can't foul him, he's going to make his free throws. He was a very hard guy to guard.

More from Herbert: Steph Curry is more than just the NBA's best shooter

You had games where you felt in the zone, what does it feel like to be on a roll like Stephen was?

"There's zones and there's zones in New York City. I was never in a zone like he was last night."

There's zones and there's zones in New York City. I was never in a zone like he was last night. To be in New York, in Madison Square Garden, and put on that type of show -- I've been in zones where obviously you feel like you can't miss, you just want the ball, you're going to shoot it from wherever you're at -- he's in that kind of zone but to do it on that type of stage, national audience, honestly I can't say I've ever felt that way so I don't know what it feels like.

Is that the best game you've ever seen him play?

Down the stretch, I think he'd like to have a couple of plays back to maybe help them get a win but it was definitely the best game. He rebounded the ball, he assisted, he made the right plays when they blitzed him or double teamed him on pick and roll, so absolutely it's the best I've seen him.

It's crazy how he played all 48 minutes and was still able to hit deep threes late in the game, especially after the Indiana game the night before.

That's what was really amazing. He played a lot of minutes in Indiana and then you go to the Garden and once you start making shots obviously you're going to be the focus of the defense so you gotta work extra hard just to get your shots off. But on the other hand, when you have it going like that, fatigue is not an issue. You don't think about getting tired, you definitely want to stay in the game. That's one thing, I was sitting around, I was watching the game, I was like ‘Alright, is he going to get tired?' They put fresh guys on him, from [J.R.] Smith to Prigioni to [Jason] Kidd so I was thinking, okay, is he going to get tired? He's having to do an awful lot, work really hard to get his shot, especially in the second half. But when you got it going like that, you don't worry about it.

What was your conversation like with him after the game?

He was out to dinner with three of his buddies, guys that he went to college with who work in New York City. It was quick, I just congratulated him, told him I was proud of him and told him that it may take a while for him to realize what he had just done. And not only that but where he did it. It was just a short conversation but I'm sure we'll talk about it a lot once the season's over and it gets to the summer. Especially on the golf course.

Did it seem like he was sort of overwhelmed after the game? It seemed in his post-game interviews it hadn't quite hit him yet.

Exactly because, one, obviously he was a little disappointed that he lost the game. But once he sees the media and I'm sure he's seen it by now but all the hype that he got because of what he's done, it'll start to really sink in that this is a bigger deal than what he actually thought it was. I think once the season is over and he looks back, [it will]. I told him, ‘Hey, one, get a tape of the game, obviously. Save your shoes and save anything you can about that game because that's the one -- hopefully not a once in a lifetime game -- but it's going to be very hard to duplicate, especially in New York.'

[Knicks head coach] Mike Woodson said "he's got good genes" after the game, referring to the fact that you were such a great shooter -- do you think shooters are born or is it more about practice, practice, practice?

I think it's both. I think obviously you're born with the God-given ability but it's up to you to work at that craft and get better with that ability that you have. And like anything if you know you can do something but you don't work at it you're not going to get any better. So just take that skill that you were born with, continue to work at it and you're going to perfect it. And that's exactly what he's done with his game. 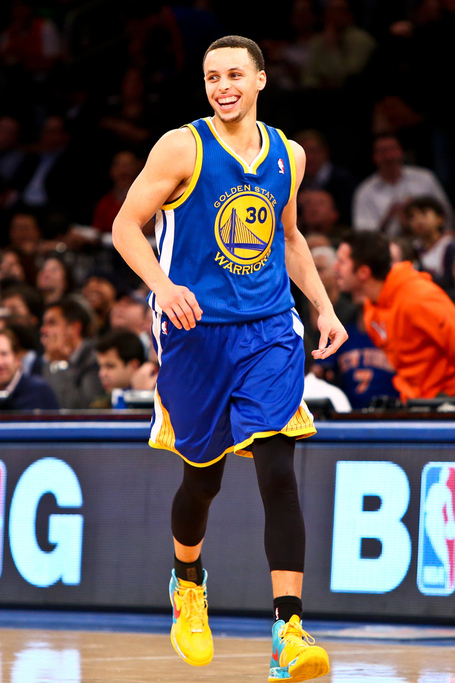 Curry on Curry: Other quotes from Dell and Stephen on one another:

Dell, on how he set an example: "When I played in the league, I knew that it was a game. It was basketball. There are people out there not nearly as fortunate as we were. We didn't take advantage of the game, we knew it was a privilege to be in the league and that's how I tried to raise my sons. And I was a role model to them, obviously. They looked up to their dad in the NBA and I knew they were watching every move I made, everything that came out of my mouth and that's just the way we are. We're a humble family. We feel like we're obviously blessed to be able to do the things, have the things we have. But it could easily be someone else in our position and we know that."

Dell, on the conversations they have now: "It's more about my grandchild, my granddaughter now. I'm really happy that I can be the dad and step back and talk to him about other things other than basketball. If he asks me then he opens it up for the basketball player side of me. If I see something that I know I need to say, I'll go ahead and do it."

Stephen: "If I ask, he's real quick to tell me what's going on. But if I want to talk about other stuff, he's fine with keeping basketball out of it and kind of letting me do my own thing but not put any pressure, any extra bearings on me. Just letting me enjoy the game. But I'm quick to ask him different things about what he sees and especially even when we play the Bobcats it's nice to hear the broadcast and him trying to stay neutral when he's obviously -- that dad spirit comes out."

Dell, on commentating Stephen's games: "His first year, it was really very difficult because when I watch his games I focus in on him ... And I caught myself doing that the first time we played, the Bobcats played the Warriors, and I'm like hey I gotta back up. I gotta watch everybody, watch the game. But I try to be as equally balanced as I can."

Stephen: "He tries. I made some nice plays in that [last] game and you could tell he got a little excited and then had to tone it back down a little bit."

Dell: "My superior I got for the Bobcats, he was talking to me after the game this year and he said he had so many people tell him that I did a great job trying not to show enthusiasm over Stephen and all the shots and the moves that he made. But my play-by-play guy, Steve Martin, he grew up ... in Charlotte. He's been there forever. He remembers Steph from when he was six weeks old or whatever. He does enough of that for me. He makes it easy for me."

Dell, on if he commentated a game when Stephen exploded like Wednesday: "That would be a special circumstance, [laughs] I think I'd be okay with it if I did show a little enjoyment if something like that happened."