'You can't judge a book by its cover': The Dion Waiters Q&A

The improving Cavaliers' rookie guard dishes on his debut season, his Philadelphia roots and being a "mommy's boy."

Share All sharing options for: 'You can't judge a book by its cover': The Dion Waiters Q&A

TORONTO -- Dion Waiters wasn't particularly pleased postgame on Sunday. The Cleveland Cavaliers guard didn't have his mind on his game-high 21 points. He didn't have his mind on his 13 points in the fourth quarter, stepping up after All-Star Kyrie Irving was sidelined with a left shoulder contusion. He was thinking about another loss, a 100-96 defeat at the hands of the Toronto Raptors.

More specifically, he was thinking about the third quarter, the one in which the Cavaliers were outscored, 33-19.

"Every time we come out in the third quarter, we always find ourselves nonchalant, laid back, then we try to get on our horses when the team makes a run," Waiters said.

Cleveland has come out flat after halftime in four straight games with an average third-quarter point differential of -10.5. It's the mark of a young team headed to the lottery -- the Cavaliers' record dropped to 21-42 in Toronto -- but the No. 4 pick of the 2012 draft is one of the players tasked with turning things around.

On an individual level, he has made significant strides.

Waiters, picked so high because of his ability to get to the basket, has been averaging around 15 points per game all season long. Lately, though, he's been much more efficient. Improving at finishing at the rim against NBA defenders, he shot 51.4 percent in February to earn himself Eastern Conference Rookie of the Month honors.

Following the tough loss at the Air Canada Centre, the South Philadelphia native put the disappointment behind him and spoke to SBNation.com about where he came from and where he is now:

SBN: I saw you chatting a bit with [Toronto point guard] Kyle Lowry. Do you guys know each other from Philly?

"You can't judge a book by its cover until you open it up and read it."-Dion Waiters

SBN: Everybody knows Philly players are known for being tough. Can you describe what those streetball games are like in Philly?

It's tough, period. Not even streetball. Just the environment itself, it gives you that anger, that confidence, that swagger, everything you see in us in Philly. The basketball game, as far as outside: physical, falls, fights, a lot of profanity back and forth toward each other. Making each other better, though, that's how it was back in the day. Right now, you can't even get in a fight for real without some violence happening now. But it's cool, man, it definitely gives you that motive, that "I ain't scared of nobody" type of attitude.

SBN: Do you think sometimes people get it twisted, they see that attitude and they think "bad guy?"

DW: Right. I've been through that from eighth grade through high school. They gave me that reputation. I was never a bad guy, never got in trouble. It's just that I played with anger and I was aggressive or I really never smiled. And you get labeled, but you can't judge a book by its cover until you open it up and read it. I'm here today, so a lot of people who said I wouldn't be because of my attitude -- I think my attitude helped me get over on a lot of people and take it to another level. 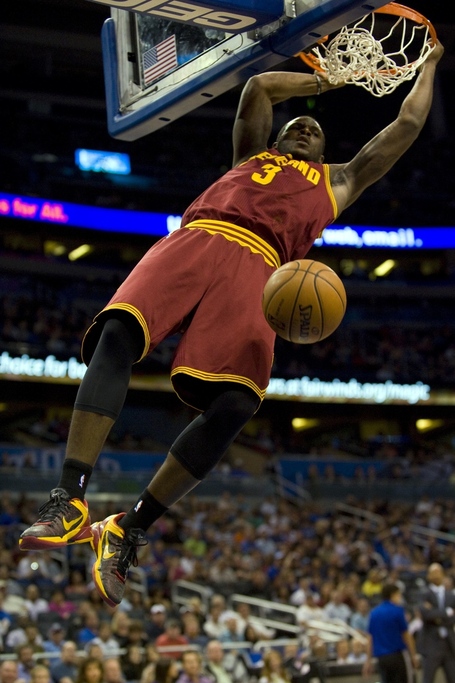 SBN: Do you still kind of reach for that for motivation? Last year you were saying you wanted to prove a point, are you past that now?

DW: I'm past that. I don't gotta prove nothing. People are gonna like who they like, there's nothing you can do about it. Just go out there, do what you do best, play your game and try to become a better person on and off the court. Just better yourself.

SBN: Your mom talked you into staying at Syracuse, not transferring after your first year. Are you still talking things through with her all the time now?

DW: My mom lives with me. She lives with me, yeah. I'm a mommy's boy, you know. She's always going to be there.

Has living with her helped you make the adjustment to the NBA?

DW: Yeah. Just being at the house, being around, she knows I've been doing a lot of travelling so I haven't been around a lot or I've been sleeping a lot, just trying to get rest.

SBN: Have to nap during the day before games?

DW: Yeah, I try to. I learned how to take naps in between.

SBN: Who's the biggest gym rat on the team?

DW: I don't know, I be in there a lot. I don't know what people do at night but I know I'm in there two or three times a day. At night, 12 in the morning, before games, be in lifting at night until probably like 12:30, won't get back in the house until like 1:30. That's what I do. That's what got me here. Just going to keep doing it, just try to take it to another level.

SBN: What's the best piece of advice you've gotten from one of the vets?

DW: Shaun [Livingston] is always in my ear every game. It's like, he's constantly talking to me. Boobie [Daniel Gibson], Luke [Walton], they tell me a lot ... Shaun is telling me, ‘Be a killer.' Be a killer that I am, just go out there and do what I do.

SBN: What does coach [Byron] Scott stress to you the most?

DW: Defense. It's defense. That's the biggest thing. He doesn't say anything about offense or anything like that. Just the defensive side.

[Scott, on Waiters: "He's still learning on the offensive end and defensive end. He also has to get much better on the defensive end, especially when his man doesn't have the ball. That's when he seems to get lost most of the time. It's a natural progression with him, especially coming from Syracuse where they play 99.9 percent of zone. So coming into this league and you play a lot of man to man, which we do, that's going to take some time. But he's making strides in that department as well."]

SBN: Does he get into shooting contests with you after practice?

DW: Oh yeah, sometimes. He talks his stuff, he talks his trash. You know, how he used to be back in the day and things like that. Still fun, competitive.

SBN: Who's your closest friend on the team?

DW: I like everybody, man. Everybody's cool. I had a relationship with Kyrie [Irving] before any of this but, man, Boobie Gibson ... Shaun Livingston ... Wayne [Ellington], it's a Philly thing so that's automatic. That's automatic right there.

More from Fear The Sword

SBN: How much fun is it experiencing this with Kyrie since you've known him since high school?

SBN: Do you think your chemistry has gotten better throughout the year, kind of feeding off each other rather than taking turns?

SBN: Ever go one-on-one with Kyrie?

SBN: How do those go?

DW: I mean, at the end of the day you're a competitor. You don't like to lose. So I don't think I need to say more.