How the Heat used misdirection to confuse the Pacers' elite defense

How did the Heat score so easily against Indiana's vaunted defense? By using misdirection and timely cuts to confuse Indiana's help defenders.

Share All sharing options for: How the Heat used misdirection to confuse the Pacers' elite defense

What was surprising, though, was just how easily Miami scored. One could expect Miami to win a grind-it-out affair, but instead, their offense dropped 121.4 points per 100 possessions against the league's best defense. Miami is a high-powered offensive team, of course, but the Pacers have stymied them twice this year and done the same to countless other high-scoring clubs.

Why, then, did the Heat succeed so much this time? 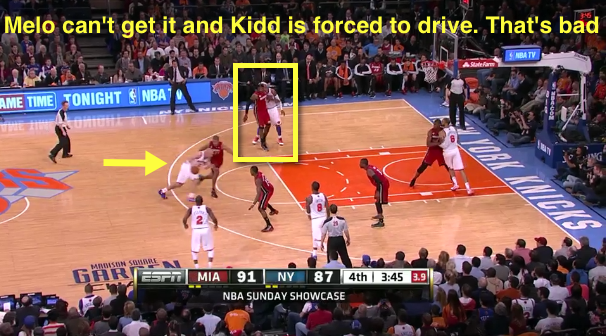 I want to focus on No. 3 specifically. I've written about how properly-used misdirection can be a deadly weapon for an offense against an elite defensive team that loves to key in on tendencies, but we don't usually think of the Heat as a team that employs these tactics. We usually think about the one-on-one brilliance of LeBron James and Dwyane Wade or even the deadly three-point shooting of Ray Allen, Shane Battier and Mario Chalmers.

But in this game at least, the Heat often went big and had to be more creative with their offensive sets.

Here's one beauty from the second quarter. The Pacers have made a run to cut the Heat lead to two, so Miami comes out in a HORNS set, used by many around the league. The two bigs stand at the elbow, while the two wings are in the corner. The point guard enters the ball to one of the bigs, and the action is triggered. (For more on HORNS sets, here's a great breakdown by Coach Nick). 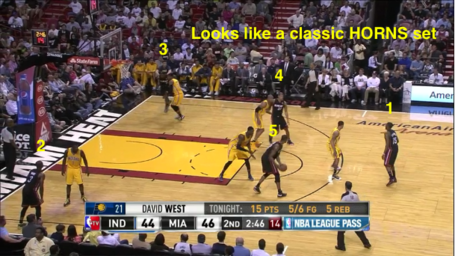 But instead of standing in the corner, James (3) cuts towards the hoop. As this is happening, Battier (4) is going to set a backscreen for Chalmers (1). 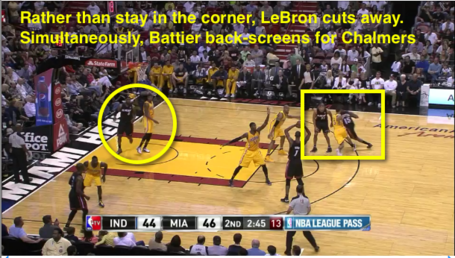 Why is this brilliant? The Heat know that the Pacers sometimes struggle to communicate on backscreens (Exhibits A, B and C here), so they know that if they can distract the help defender (Paul George), they can get a layup. Therefore, they use LeBron, the very best threat in basketball, to do exactly that. 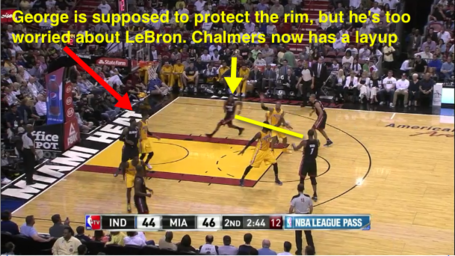 George, naturally, is reluctant to leave James, and that opens up the pass from Chris Bosh to Chalmers for the layup. If James stays in the corner, George likely sinks down into the lane and cuts off this pass. By having James cut to the hoop himself, the Heat have forced George to think about James instead of stopping the play they actually want to run.

Here's another example from the third quarter. The play begins with a double screen to get James going to the top of the key. 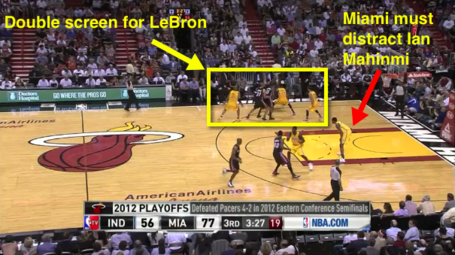 Ian Mahinmi, who is red arrow'd in this screenshot, is the Pacer tasked with protecting the rim. The Heat will engage him by having Battier roll to the rim off the screen. 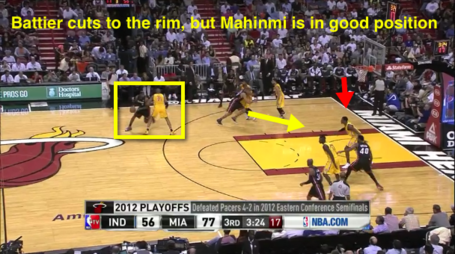 But if the Heat do nothing else on this play, the Pacers will shut it off. Mahinmi will only need to take one step over to be in position to pick off a pass from James to Battier, and that's a natural decision to make because Mahinmi's man, Udonis Haslem, is not much of a threat from his current spot.

That's what makes what follows so brilliant. Instead of standing uselessly on the weakside, Haslem sets a backpick for Allen to flare into the weakside corner. 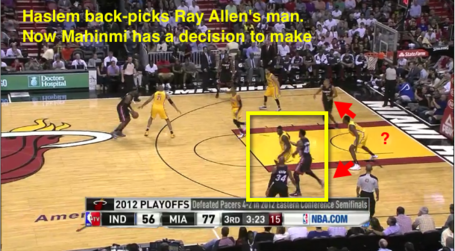 The threat of Allen makes Mahinmi pause for a second. It's a tough delivery for anyone to get Allen the ball, even a passer as brilliant as James, but the Heat just need to distract Mahinmi for a split second. By giving him something else to think about, they open up the James-to-Battier pass they wanted all long. 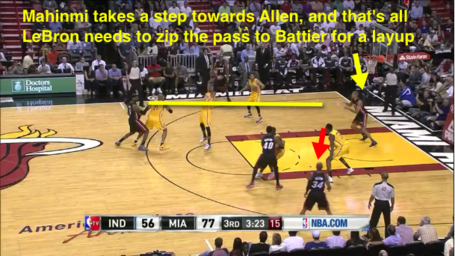 That's the genius of misdirection. The more action you run, the more you give defenders to think about. When they have so many things to think about, they'll make mistakes like Mahinmi just did.

Misdirection doesn't always have to be scripted either. On this play in the second quarter, Joel Anthony, a virtual non-threat, uses his cutting ability to open up a three for Allen.

As the play begins, Anthony is standing on the left side of the rim. 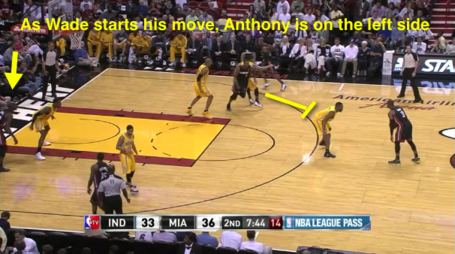 Watch, though, as he sneaks to the right side as everyone else is watching Wade make his move. 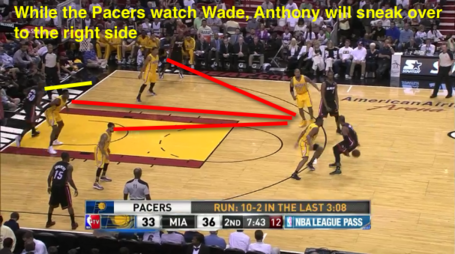 That may not seem like much of a cut, but watch how young Orlando Johnson reacts. The Pacers rookie is guarding Allen, and he surely receives instructions not to leave him open for any reason. But Johnson is human, and when he sees Anthony make his cut, his natural inclination is to protect the paint. 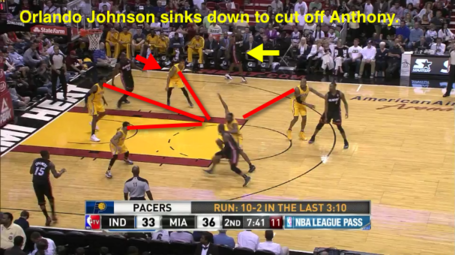 And, well, look what that opens up. 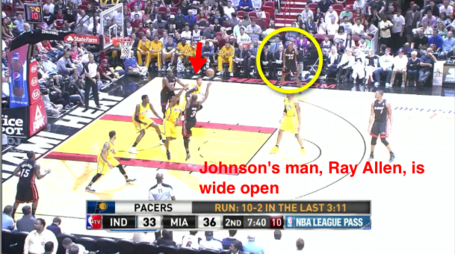 That turned out as you probably expected.

Finally, you even saw several instances where the Heat made cuts to get the ball off the initial action. Watch how Wade sneaks behind George Hill here as everyone else is watching Chalmers draw a critical foul on Hibbert. 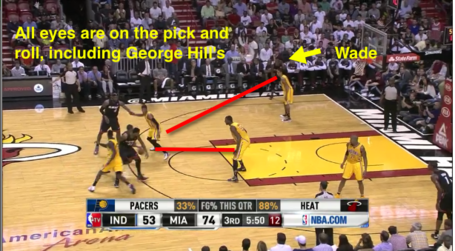 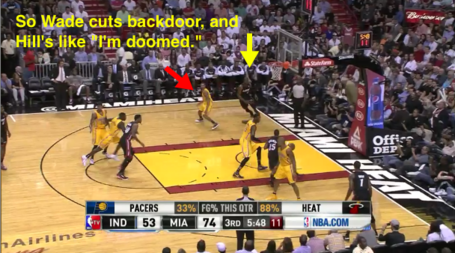 As noted before, this was just one way the Heat poked holes in the Pacers' normally tight defense, but it was an especially smart way to do it. Great defenses are great because all five of their defenders move in harmony with the ball. They are specifically designed to cut off isolation and pick and roll plays that rely on one or two players while the others turn into statues.

Therefore, the only way to beat them in a half-court setting is to ensure those other three or four players aren't statues. Miami did this perfectly on Sunday and got the statement win they were seeking.

Lakers slide into 8th seed with win over Bulls