The Spurs' defense was off for the first 15 minutes against the Thunder Monday. Then, their perimeter players buckled down at the point of attack and shut down Oklahoma City's high-powered offense, enabling a critical win.

It's important to not make too much out of regular-season results, especially when the losing team is playing its fourth game in five nights. Nevertheless, considering the recent play of both teams, the Tony Parker-less San Antonio Spurs' 105-93 win over the Oklahoma City Thunder was a big deal as far as regular-season games go. San Antonio was coming off an embarrassing home loss to the Portland Trail Blazers, while Oklahoma City had closed to within one game of the Spurs for the top spot in the West with a five-game winning streak.

Early on, it looked like the Thunder would rule the day, taking a double-digit lead into the second quarter. Then, the Spurs responded, outscoring Oklahoma City by 23 points the rest of the way.

What changed? The Spurs' defensive effort.

MORE ON THIS GAME: Pounding the Rock Welcome to Loud City

We're in an era of hybrid-zone schemes and five men playing as one, but sometimes, it just comes down to guarding your man better. In the first 15 minutes of this game, the Spurs' primary defenders did a terrible job of fighting over screens and being the first line of defense.

For example, look at how Gary Neal runs right into Serge Ibaka's screen, setting up an easy pick and roll finish for the Thunder big man. 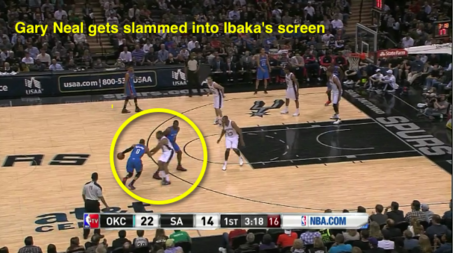 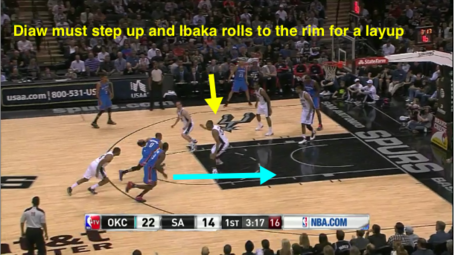 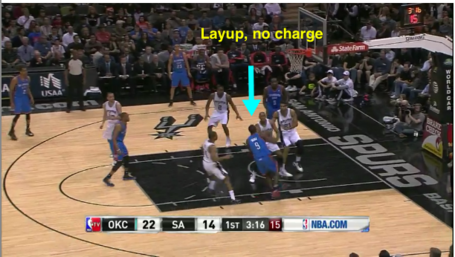 And here's Neal ushering Russell Westbrook to the rim with poor one-on-one defense. 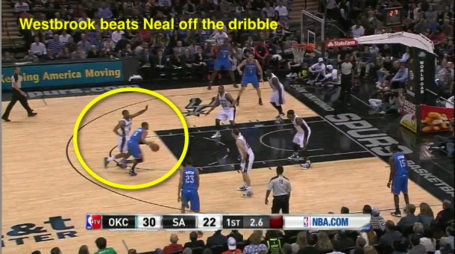 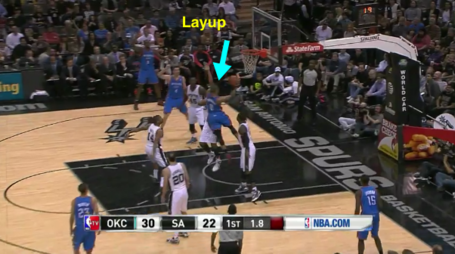 And finally, here's Neal bodying Kevin Durant the wrong way on a switch and allowing dribble penetration that led to a Nick Collison dunk. 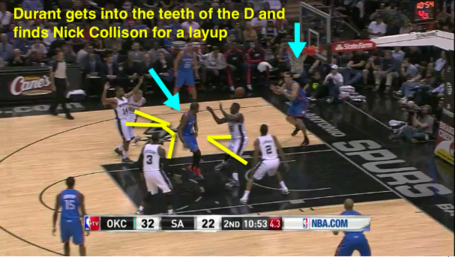 I'm picking on Neal, but he wasn't the only one making these mistakes. It was a team-wide problem, and it enabled the Thunder to score 42 points in the first 15 minutes of the game.

From there, though, everything changed. Oklahoma City only scored 51 points in the final 33 minutes of the game, and some hot Spurs shooting from mid-range allowed them to run away with the game. The hot mid-range shooting probably isn't sustainable. The defense? It definitely is, because those same perimeter players that were getting beat at the point of attack early on took it upon themselves to not let it happen the rest of the game.

Since we picked on Neal above, let's focus on a couple plays where Neal improved. First, watch how he's positioned himself right on Westbrook's hip, staying connected through a screen and forcing a tough shot. 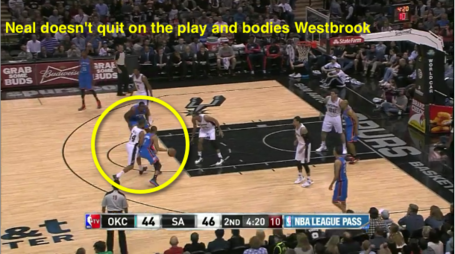 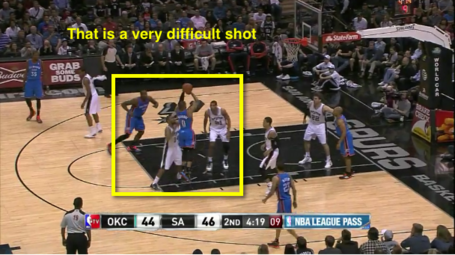 Later, Neal does an excellent job of locking and trailing Durant coming off a curl screen, an effort that proves instrumental in forcing one of Durant's five turnovers. 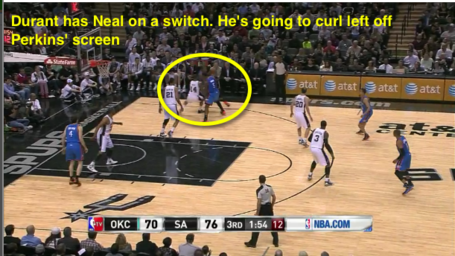 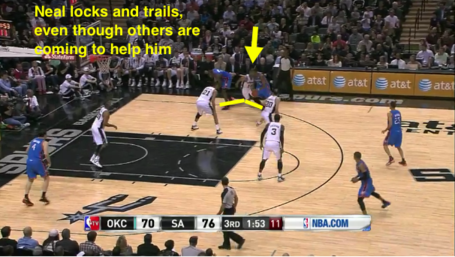 Durant turns it over because Manu Ginobili and Tim Duncan also converge, but the effort by Neal is still instrumental. If Neal got picked off instead of fighting over the screen and staying in Durant's hip pocket, it would have been easier for Durant to just shoot over both help defenders. By staying in his hip pocket, Neal forces Durant to put the ball on the floor, leading to the turnover. 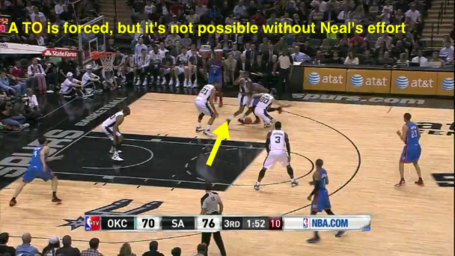 In general, the Spurs' defense on Durant in the third quarter was excellent. Here's Kawhi Leonard doing the same thing Neal did earlier in the quarter. 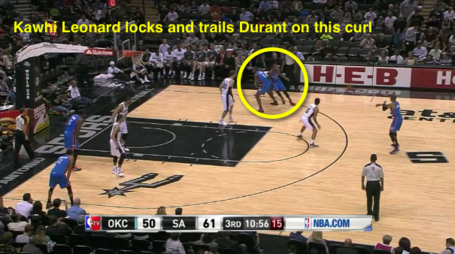 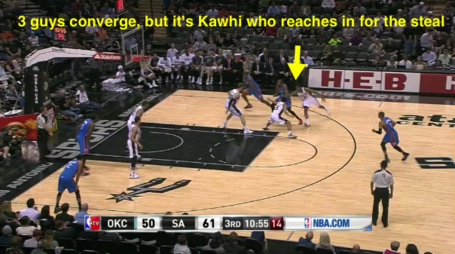 Later, Manu Ginobili steps out beautifully on a side pick and roll, fighting over the top of the screen and forcing another Durant turnover. Watch how Ginobili anticipates Ibaka's screen and shoots the gap before Ibaka can get set. 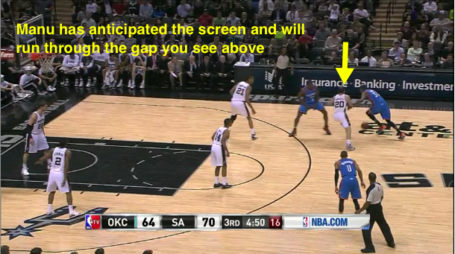 Because of that, Ibaka can't make contact with Ginobili, and Durant is hounded. That leads to another turnover. 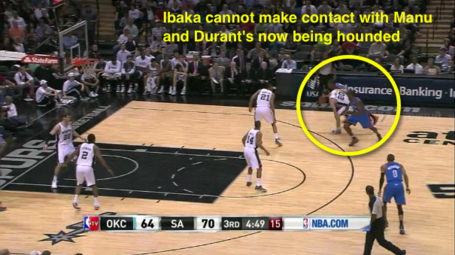 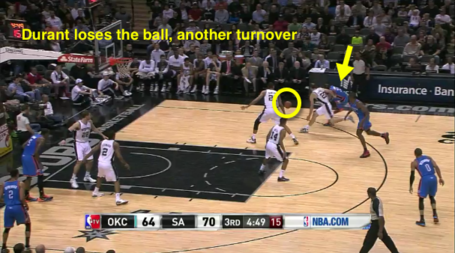 Here's one more example from early in the fourth quarter on Kevin Martin. Watch how Stephen Jackson fights through a baseline curl to prevent Martin from catching and firing from the perimeter. 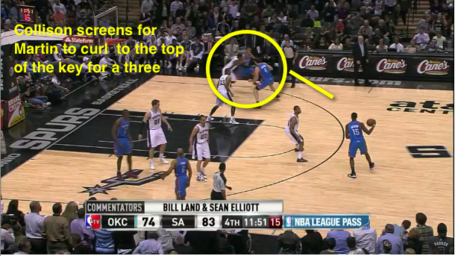 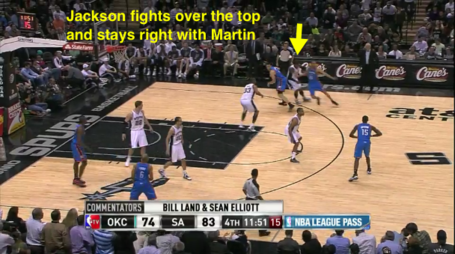 The end result is that Martin catches the pass with Jackson right in his face. Martin's only move is a wild drive to the rim that is easily swatted away by Tiago Splitter. 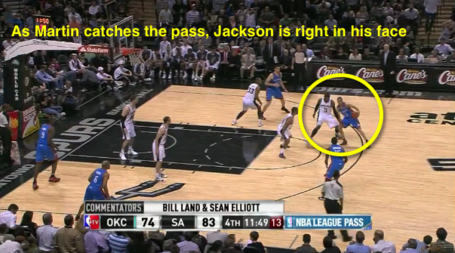 The Spurs' defensive improvement in the final three quarters of this victory was much needed after the Trail Blazers shredded them Friday. There were some schematic changes, to be fair, particularly with the positioning of help defenders. But without better effort, ball pressure and toughness by these perimeter defenders on the front lines, none of that would have mattered.

Sometimes, defense really is all about effort.