Coming off his best game with the Los Angeles Lakers, center Dwight Howard visits Atlanta with a formidable matchup against Al Horford on the table and the drama of his future as another storyline.

Share All sharing options for: Lakers vs. Hawks: Dwight Howard's present and potential future in Atlanta

If Dwight Howard's return to Orlando was his farewell to the past, then the Los Angeles Lakers' visit to Atlanta on Wednesday where they'll face the Hawks could be a glance at his future.

That's getting ahead quite a bit. 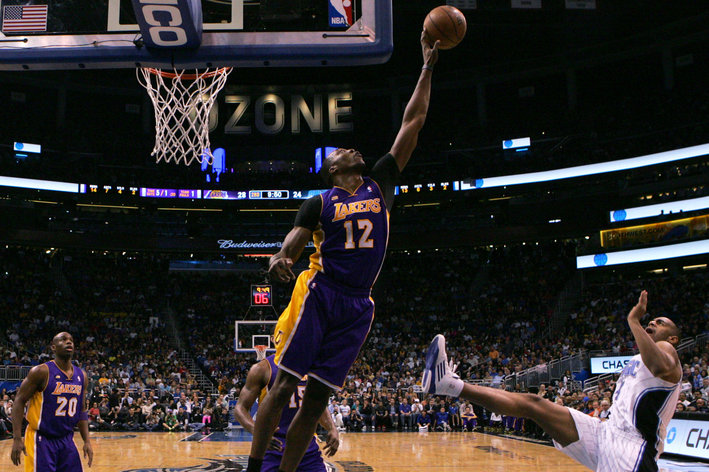 The present is this: Los Angeles (34-31) is chasing down more than the eighth seed all of a sudden. Not long ago it was Kobe Bryant defending his guarantee that the Lakers would make the playoffs. Now, they have a realistic shot at moving up to No. 6 in the Western Conference. They are only two games behind the Golden State Warriors for that spot and at 8-2 in their last 10 are one of the hotter teams in the league.

Howard's recent upswing is a big part of the Lakers' success. And he's coming off his biggest game of the year, where a Hack-a-Howard tactic by his old Magic team backfired as the center scored a season-high 39 points while hitting 25-of-39 free throws.

The Hawks have long been rumored to be a potential landing spot for Howard, an Atlanta native and friend of Hawks forward Josh Smith. Both will be free agents this summer.

Atlanta's present, however, is much like Los Angeles'. It stands seventh place in the Eastern Conference with the potential for much jostling to be done before the season is over. The Hawks are 1.5 games ahead of the eighth playoff spot, tied at 34-29 with the sixth-place Boston Celtics and only three games behind Brooklyn in the fourth playoff slot.

But Atlanta is also struggling mightily, having lost six of its last seven games. During that span, the Hawks are averaging 90.7 points per game with little offense coming outside of Smith, Al Horford and at times Jeff Teague.

Atlanta is already hurting in the backcourt with Lou Williams being out with a torn ACL. But in the Hawks' 98-81 loss to the Miami Heat on Tuesday, point guard Jeff Teague sprained his ankle, adding another obstacle to his sometimes-on, sometimes-off play of late. He is questionable.

Center Zaza Pachulia will be out with a sore Achilles, giving Atlanta less size against a Los Angeles team that outside of Howard could be taken advantage of in that regard.

The Lakers may have been dominating behind Howard of late, but Atlanta center Al Horford will surely be a test. In a March 3 loss to the Lakers, he poured in 24 points, although he only grabbed five rebounds. In seven games this month, Horford is averaging 18.9 points and 9.7 rebounds on 54.5 percent shooting.