Gerald Henderson gets an assist from Michael Jordan

Michael Jordan's not as visible as he once was as the Bobcats' owner, but he's still sharing wisdom with Gerald Henderson.

Share All sharing options for: Gerald Henderson gets an assist from Michael Jordan

TORONTO -- Gerald Henderson's been a Charlotte Bobcat for almost four years. He's already had three coaches and has yet to play a playoff minute. Last year the Bobcats finished 7-59, with the worst winning percentage (.106) in NBA history. This season they're 14-52 (.212), worst in the league. Take all that losing after so much success at Duke and add foot, hip, hamstring and back injuries sidelining the swingman for significant stretches -- it's just about the least lucky way you can start a career.

Charlotte gave him one big perk, though: Michael Jordan.

Jordan bought a majority share of the Bobcats in late February 2010. Days later, he played against the rookie in H-O-R-S-E. Henderson won both games. At first, Jordan was a fixture behind the bench. Since then he's taken a step back and switched to his suite, dropping in only periodically.

Last year, Jordan gave Henderson video to watch, with Henderson's own plays mixed in with those of Kobe Bryant and Carmelo Anthony. In December, Jordan turned up at practice to play some one-on-one. He's not around all the time, but he's there.

Henderson knows it's hard for Jordan to keep his distance.

"He'd want to suit up if he could," he said. "Obviously his age is the only thing holding him back from doing that. He's all in. I think everyone knows that."

The son of Gerald Henderson Sr., who won three titles in his 13-year NBA career, Henderson and Jordan's paths crossed a few times before he became a Bobcat. But growing up around the game doesn't mean he takes this relationship for granted. 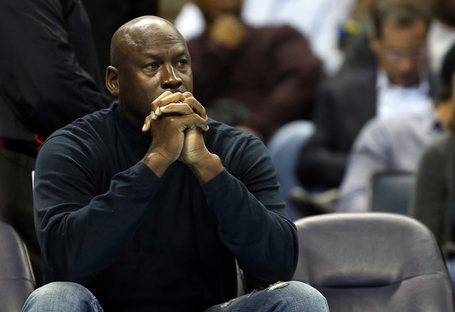 "He'll pop a guy if he doesn't think he's playing hard but he doesn't do it a lot because he knows that that can be tough on a young guy," he said. "But I just think he's great at it. He shows an adroitness, MJ does, in how he moves a player up the ladder. And I think he's challenged Henderson to be more consistent. And over the last three weeks, the facts are saying he's trending that way and so I think MJ's comments have been really good for Gerald."

Since Feb. 23, Henderson's averaged 17.8 points, 3.1 rebounds and 2.7 assists per game, shooting 47.1 percent from the field and 88.9 percent from the free throw line. He scored a career-high 35 points on 11-for-19 shooting in a 100-74 rout over the Boston Celtics on Tuesday, the Bobcats' lone win during that stretch and second since their one-point victory over the Minnesota Timberwolves on Jan. 26.

"I've had good games, I've had bad games but when you're not winning it's tough to come in here," Henderson said. "We're not playing for the playoffs, you want to win, it wears on you a bit. Sometimes you can lose focus on how you're playing individually because the team's doing so bad but you gotta worry about what you're doing to be the problem. What can you do individually to try to change things around? And for me I think that is playing more consistently on both sides of the floor, so I think that'll help our team. And so far it hasn't resulted in wins but it'll work out."

The hope is that a new contract will work out. Unable to agree on an extension before the season, Henderson will be a restricted free agent come July. His name appeared in rumors around the trade deadline and, while Jordan said in the past that Henderson had all-star potential, he said before the season that this year was about finding out if he'll be a long-term piece. Regardless of whether or not Henderson will continue to be a part of Charlotte's core, Jordan's early support will have a lasting impact.

"Michael's been very influential in my career," Henderson said. "He's stuck with me. It's my fourth year here. You know, four years is a lot of time to be with one team, especially when you're not winning. There's a lot of changes that could have been made but he's stuck with me so I have the utmost respect for him [outside of] anything he's done on the basketball court as a player."

• Get your printable NCAA Tournament bracket

• The morality of Lakers trolling

• Carmelo has his knee drained