Was the Andrew Bynum trade a mistake?

In light of Andrew Bynum's season-ending injury, is it fair to say the Philadelphia 76ers messed up by dealing for him over the summer? Here's why that question can't be properly answered until the summer.

Share All sharing options for: Was the Andrew Bynum trade a mistake?

In the aftermath of Andrew Bynum having surgery on both knees to end a season that never began, there will be many who will question whether the Philadelphia 76ers did the right thing to trade for him last summer. We know what Doug Collins thinks, but he was only talking about the here and now. The question of whether the 76ers made the right decision depends on a number of factors that have little to do with how this season turned out.

To properly evaluate the 76ers' decision, we need to answer three smaller questions.

1. Did the 76ers break up a legitimate team to deal for Bynum?

The decision to jettison longtime mainstay Andre Iguodala in the four-team trade for Bynum was an obvious signal that the 76ers didn't believe their current mix would seriously challenge for the upper echelon of the Eastern Conference. Combine that with the summer decisions to let sixth man Lou Williams walk and use the amnesty clause on Elton Brand, and it was clear the team would be dramatically changing.

Was it worth breaking up that club? Those who say no will point to Philadelphia's 2012 playoff run that saw them finish a game from the Eastern Conference Finals. With internal development from Jrue Holiday, Evan Turner and Thaddeus Young, combined with the core of Iguodala, Brand and Williams, Philadelphia seemed dangerous.

But if you peel back the layers, the shine wears off on the roster quickly. The 76ers faded badly after starting fast in 2011-12 and only got as far as they did in the playoffs because of injuries to Derrick Rose and several Celtics. Had they kept Williams, Brand and Iguodala, they would have been in a dicey salary situation this year and next year (just under the luxury tax, no serious cap room to improve the roster). Even in this weak Eastern Conference, is a team of Holiday, Turner, Iguodala, Young, Brand and Williams a serious threat? I'm inclined to say no, and I don't see a ton of room for growth.

So the 76ers did what many fans hope their mediocre teams would do: blow it up and take the chance on elite talent. If it succeeded, the team would be better. If it failed, the team would still have around $14 million in cap space, depending on where the cap line fell. I'm inclined to agree with Liberty Ballers' Michael Levin when he wrote this a few months ago.

The owners weren't going to settle for first or second round playoff losses behind a team playing at the height of its ability. It was no longer a team spinning its wheels but one with a goal. A tangible goal that's worth holding onto. I can't release the stranglehold I have on that goal much as I can't defer my certainty that our 25-year-old center will sign a contract here in the offseason and lead us to the promised land when our time comes.

Philosophically, then, I can't fault the 76ers for making the deal. The team they would have been stuck with had they not traded Bynum was going nowhere.

2. Should the 76ers have anticipated Bynum's knee issues?

Remember, this was reportedly one of the reasons why the Orlando Magic didn't trade for Bynum in the Dwight Howard deal. General manager Rob Hennigan chose instead to pursue the long, slow rebuild, and he is getting praised for it now. Should Philadelphia have done the same thing and chosen a long rebuilding effort over the deal for Bynum?

It's tricky to say because, at some point, you need franchise-changing talent to turn things around. Even without Bynum this year, the 76ers are positioned to be somewhere in the middle of the lottery, thanks mostly to Jrue Holiday's emergence. Given the presence of Holiday, Young and Turner, completely bottoming out and trying for a top-three pick seemed unrealistic.

The Magic had the luxury (that's probably the wrong word, but whatever) of having a completely bare cupboard outside of Howard. They could afford the slow rebuild because they didn't have a quasi-star like Holiday that would carry them to late-lottery draft positioning. Philly, on the other hand, had a roster more conducive to the short retooling that the Bynum trade offered. 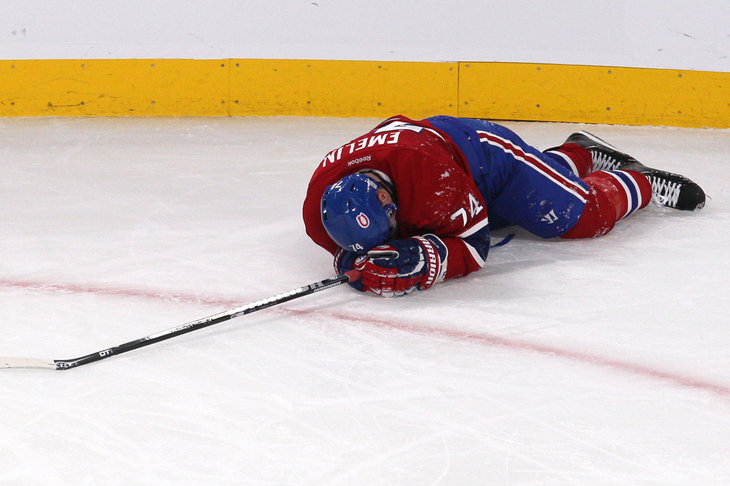 This picture, which is not of Andrew Bynum, says it all.

That said, the 76ers had to know they were taking a huge risk with Bynum's knees. That risk has worked out terribly so far.

3. What happens this summer?

This is the most difficult question of all. It's one thing to blow up a mediocre team to take a chance on an elite talent with injury issues that has one year left on his contract. It's a whole 'nother matter to give that same player a maximum contract one year after those injury issues caused him to miss the entire season. The last team to give a player with significant knee issues a maximum contract was the Washington Wizards with Gilbert Arenas, and you know how that turned out.

Perhaps the 76ers can dodge a bullet and keep Bynum without maxing him out, but that seems unlikely. Yahoo! Sports' Adrian Wojanrowski has already reported that the Dallas Mavericks and Houston Rockets would consider chasing Bynum this summer. There are a lot of teams with cap room and not a lot of high-level free agents, assuming Dwight Howard and Chris Paul stay with their teams.

Making matters worse: a maximum contract for Bynum would start at close to $17 million due to his years of service, according to CBA guru Larry Coon's FAQ. If another team offers Bynum a four-year max deal, the only way the 76ers can trump that is to give him their designated five-year maximum contract, which would be worth close to $100 million. That's a huge commitment for any player, especially one with Bynum's injury history.

Maybe Bynum's knees stay relatively upright, but do you want to pay $100 million to find out?

The alternative may be a purgatory team for a while, but giving Bynum that kind of deal is a massive risk that could handcuff the team for years if it works out poorly. In other words: it'd turn a somewhat-reasonable gamble into a longshot risk. Maybe Bynum's knees stay relatively upright, but do you want to pay $100 million to find out?

This summer, therefore, is where this deal will truly be judged properly. It's hard to say that the 76ers did anything seriously wrong yet, but that will change if they double down on their faulty investment instead of cutting bait.