The East region features some of the best prospects in the 2013 NBA Draft, but who wins out between Anthony Bennett, Cody Zeller, Victor Oladipo and others? The answers may surprise you.

If you're looking for individual heroics in March, the East Region is the one to check out. There are four lottery prospects among the top-5 seeds -- Anthony Bennett (UNLV), Cody Zeller (Indiana), Victor Oladipo (also Indiana) and Michael Carter-Williams (Syracuse). All four are crucial to their team's success, and all four can take over a game with the ball in their hands.

It's not just the lottery prospects either. There are guys on teams up and down this bracket who can go nova and carry a team into the second weekend. Just last season, the duo of Lorenzo Brown and C.J. Leslie brought NC State to the Sweet 16 despite an underwhelming regular season. Brandon Paul (Illinois) and Allen Crabbe (California) are both NBA-caliber shooting guards who can catch fire from beyond the arc, while Miami (Shane Larkin) and Colorado (Spencer Dinwiddie) have guys who can make plays with the game on the line.

As a result, this is the bracket almost guaranteed to have fireworks and high-level matchups in the Sweet 16 and Elite 8. The one NBA scouts are dying to see is UNLV/Indiana, which features two teams overflowing with talent that like to play at a very fast pace. That has the potential to be the most entertaining game of the tournament. And even if one of those teams stumbles on their way to that game, it will likely be because a future NBA player tripped them. 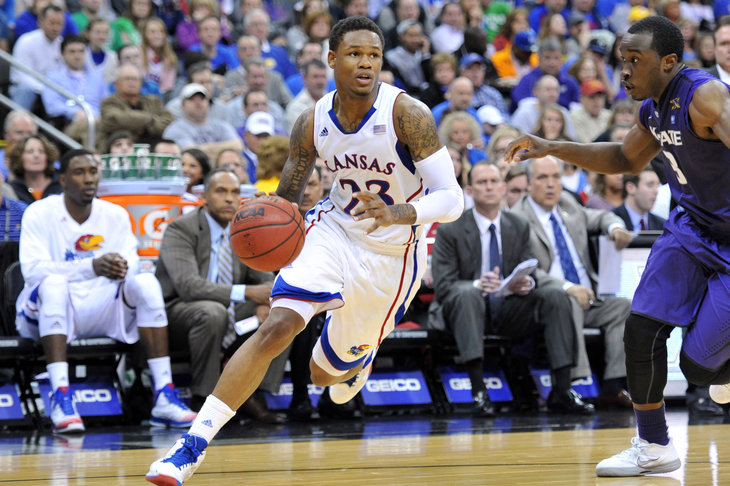 Here are my rankings for the top prospects in the East region.

When his shot is falling, Bennett is the most indefensible player in the country. An athletic 6'8 240-pound combo forward with a 7'1 wingspan, he is the prototype small-ball power forward that has become all the rage in the modern NBA. He's a scoring machine, with the size to punish smaller defenders down low, the shooting ability to bring bigger ones out of the paint, the quickness to beat them off the dribble and the explosiveness to finish through traffic.

More often than not, the only guys who can slow Bennett down are his teammates, who often freeze him out of the game to hunt for their own shots. In a Mountain West semifinal game this week, he had 11 points in less than two minutes and took only five shots the rest of the game.

When Indiana can play out in the open court, it is almost impossible to defend. There's no way to run with the Hoosiers for 40 minutes, but less talented squads like Wisconsin and Ohio State have had success against them by taking care of the basketball and grinding the game to a halt. That's why Zeller is so important for them in the tournament, as his ability to get his own shot at 6'11, 240 pounds can be an invaluable weapon in a half-court game. There aren't many centers who can score facing up and with their back to the basket.

He's not a great rim protector or rebounder, so he may have to play as a power forward in the NBA, but he should excel at the next level as long as he is paired with a more defensive-minded big man.

There isn't a more gifted playmaker in the country than Carter-Williams, a lightning-quick 6'6, 185-pound point guard who can get around defenders at will and find his teammates anywhere on the floor. The problem is that he can't shoot. Like, at all. That can be a bit of an issue when a guy has the ball in his hands for 90 percent of the game.

James Southerland is the only Syracuse player who can consistently stretch the floor, so when he missed six games due to academics halfway through the season, their offense fell apart. Carter-Williams is going to have to force turnovers and get them out into the open floor, because if the Orange get caught in a half-court game and Southerland's shot isn't falling, they can lose to anyone.

One of the most improved players in the country this season, Oladipo went from a borderline first-round pick as a sophomore to a Wooden Award front-runner as a junior. A super-athletic 6'5, 210-pound shooting guard who added a ton of polish to his game in the off-season, he can impact the game as a shooter, scorer, on-ball defender, rebounder and weak-side shot-blocker. He can struggle to create his shot against bigger and more athletic defenders, but there aren't too many of those guys in college basketball.

While the Dwyane Wade comparisons are a bit unrealistic, Oladipo has the ability to take over a game in the second weekend and, in the right system, should become an excellent two-way starter at the next level.

Around the country, Crabbe is known mostly for being shoved by Cal coach Mike Montgomery in a heated exchange during a timeout earlier in the season. However, the 6'6, 210-pound junior wing has been quietly carrying the Bears for most of the year. On a thin team with only one other player scoring in double digits, Crabbe averages 19 points on 46 percent from the field/35 percent from three-point range/81 percent from the free-throw line. Those are impressive efficiency numbers for a jump-shooter who doesn't have another primary scorer on his team.

Crabbe has improved the other parts of his game -- rebounding, defending, attacking the rim, making plays for others -- to where he could start on the right team at the next level, but he'll make a living by his ability to space the floor.

One half of one of the most exasperating duos in college basketball, neither Brown nor Leslie was able to make the leap many expected in their junior seasons. N.C. State was one of the most talented teams in the country, but inconsistent play on both sides of the ball, as well an ankle injury for Brown, had them scuffling along in the middle of the ACC for most of the season. At 6'5 and 185 pounds, Brown has excellent size for a point guard and his versatility should make him a useful player coming off the bench at the next level. However, to be a starter, he'll need to become a more consistent jump shooter (41/22/77 this season). 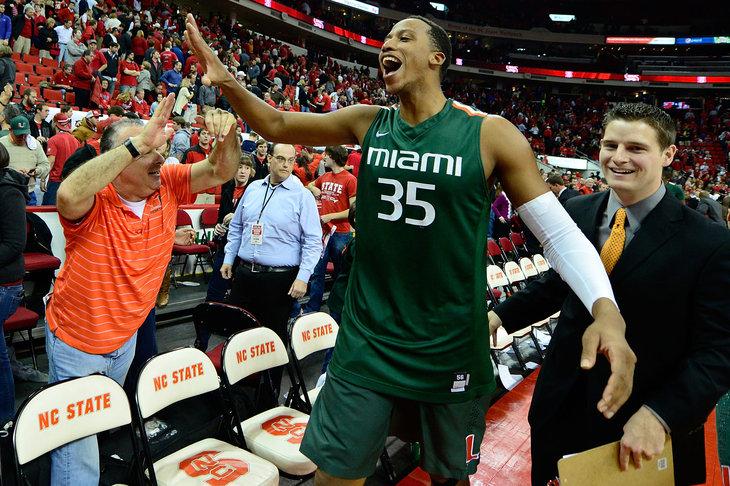 Kadji, a fifth-year senior, will turn 25 in May. How old is that? He'll be four years older than Jrue Holiday, whose now in his fourth NBA season. There are very few college players who would even be looked at by teams at that age, but Kadji has the combination of size (6'11, 245 pounds) and shooting ability (48/36/68) that almost every NBA team covets these days. It remains to be seen whether he can be effective enough in the other facets of the game to merit serious minutes at the next level, but he should be able to carve out a career by running pick-and-pops and not being terrible defensively.

Of course, he'll be 29 by the time his rookie contract ends, which will significantly reduce his career earnings potential.

There's no one whose cost himself more money this season than Leslie. He has the talent to be an All-American, but didn't even make an All-ACC team as a junior. An athletic 6'9, 200-pound combo forward with a 7'1 wingspan, Leslie's combination of size, quickness and skill should theoretically be indefensible. Instead, he spent too much time hanging on the perimeter and doesn't usually impact the game on the defensive end or as a rebounder as much as he's capable of doing. On the next level, his lack of a jumper means he'll likely be a small-ball 4, but until he puts it all together mentally, it's unlikely an NBA coach will give him serious minutes.

All that said, the talent is there. If he has a strong tournament, it will go a long way.

Paul is another guy with all the talent in the world whose never quite been able to put it all together. Illinois got off to a 12-0 start, including an 11-point victory at Gonzaga, with Paul leading a crew of guards who bombed away from the three-point line. However, the lack of variety in their offensive game caught up to them as the season went on. A 6'4, 200-pound senior shooting guard, Paul is undersized for his position at the next level, but he has the shooting ability and athleticism to take over a game against anyone. He dropped 35 on Gonzaga this season and went for 40 against Ohio State last season. His shooting percentages aren't great (40/33/75 this year), but he's never had the opportunity to spot up off a more talented player at Illinois either.

How you view Roberson probably depends in large part on where you fall under the age-old "stats vs. scouts" debate. On one hand, Roberson is a 6'7, 210-pound junior combo forward without a clear position at the next level. While his jumper isn't terrible, he's much more effective playing close to the rim, something he might be too slight to do in the NBA. On the other, check out those statistics! He's a stat-stuffing machine who averages 11 points, 11 rebounds, 1.5 assists, 1.5 blocks and two steals a game this season.

In reality, "stats vs. scouts" is really like "nature vs. nurture" in that it's crazy to ignore either side's contribution, so maybe Roberson evens out as an average NBA player. Someone will roll the dice on him in the second round to find out.

There's no one who has more to gain from a strong tournament performance than a dominant mid-major big man like Muscala. Andrew Nicholson (St. Bonaventure) and Kyle O'Quinn (Norfolk State) both locked up draft spots with strong performances in the first round last season. Muscala, a 6'11, 240-pound center, has great stats in the Patriot League (19 points, 11 rebounds, two assists on 52/26/78 shooting percentages) but it's an open question how he will perform on both sides of the ball against guys who aren't going pro in something other than sports.

If you want to know why that might be a concern, google "Omar Samhan." In college basketball, some statistics really are more equal than others.