How the Denver Nuggets hide their cutters in half-court situations

The Denver Nuggets are seen as an up-tempo team, but they do all sorts of unique things to allow themselves to score in half-court situation. We break down some of George Karl's intricate plays.

Share All sharing options for: How the Denver Nuggets hide their cutters in half-court situations

The Denver Nuggets have now won 13 straight games, making them a factor in the Western Conference's elite. What was once seen as a very top-heavy conference is now a five-horse race, and Denver is clearly one of those five horses. Any doubt was removed with the Nuggets' 114-104 win over the Oklahoma City Thunder Tuesday, a road victory that came on the second night of a back-to-back after an overtime win in Chicago the previous night.

MORE: Time to give the Nuggets some respect More Prada's Pictures

The stereotype against the Nuggets is that they win with athleticism rather than precision. Those that doubt the Nuggets wonder how their offense will score in half-court situations against tough defensive teams. While there is some truth to this point of view -- the Nuggets do score a lot of points in transition, in early-offense situations or with their simple, drive-and-kick game -- it sells their execution short. George Karl and his players have incorporated a number of wrinkles into their offense that were on full display in Tuesday's win.

Let's take a look at a couple of these.

NBA defenses in 2013 call for players to load up on the ball and trust their ability to rotate properly to cover their men when the offense swings it. The Nuggets, like several teams, try to counteract this with proper spacing. Unlike other teams, they use the baseline as an ally, sneaking cutters to the basket outside the defense's line of vision.

This victimized the Thunder on several occasions on Tuesday. Here's just one example where Ty Lawson gets a layup because his man, Thabo Sefolosha, isn't paying attention.

The play begins with Andre Iguodala and Danilo Gallinari executing a dribble handoff while Lawson stands in the left corner. This is one way where the Nuggets' versatility is a huge asset. Very few teams have as many capable ball-handlers as they do, which allows them to put Lawson in many places on the court. Lawson's defenders aren't often adept at defending off the ball, so this is a huge advantage for Denver. 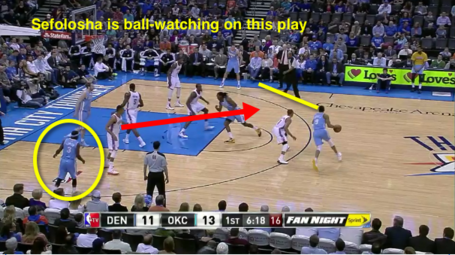 Already, you see Sefolosha's attention is diverted. As we roll the tape forward, he sinks off Lawson to help contain the play on the opposite side. 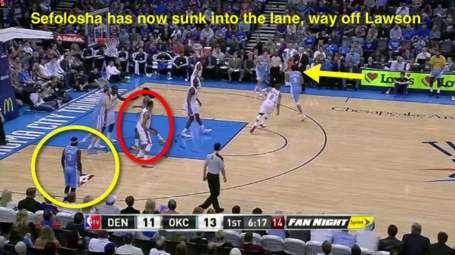 This isn't bad defense by Sefolosha. Corner threes are the rage these days, so most teams would instruct Lawson to stay where he is and be ready for a kickout pass. Sefolosha would have plenty of room to recover if the ball did get swung Lawson's way.

The Nuggets, though, aren't most teams. Rather than stay where he is, Lawson trots along the baseline behind Sefolosha's line of vision. 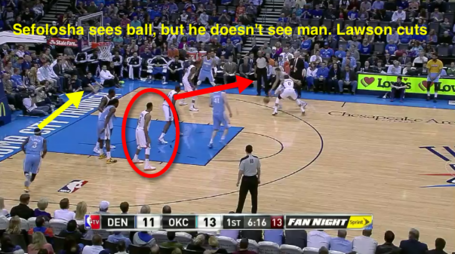 Lawson is going to cut right behind Kenneth Faried, stationed in the lane. Many coaches wouldn't like this, but the Nuggets counteract that by having Lawson time his cut right as Gallinari drives. Kendrick Perkins, defending Faried, will naturally ball-watch just like Sefolosha, opening the lane for Gallinari to drop it off to Lawson for a layup at the perfect time. 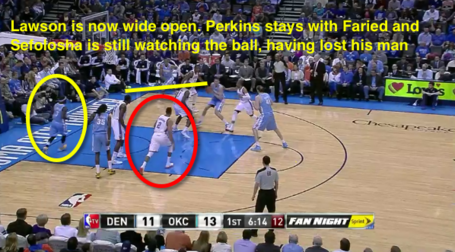 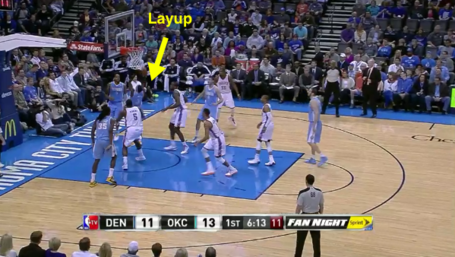 The Nuggets killed Oklahoma City with this baseline action all game, sneaking multiple players away from the Thunder's line of vision. They also occasionally had wing players cut towards the middle after starting on the baseline. Here's one such example with Corey Brewer.

Let's break this down further. Here's how the play begins. 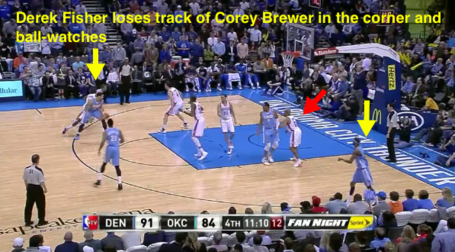 Fisher, like Sefolosha, has sunk into the lane to provide extra help on a pick and roll happening on the opposite side of the court. But rather than cut baseline, Brewer is going to make a "V" cut down the lane once he sees Miller start to drive. What seals the decision is Fisher's positioning once Miller does come off the pick. 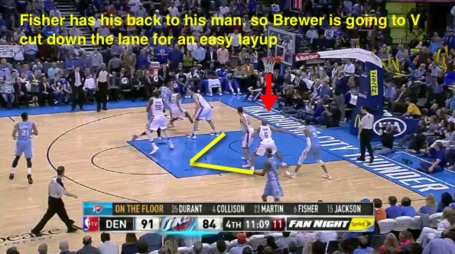 With Iguodala already on the baseline, it makes more sense for Brewer to cut middle. That's exactly what it does and it results in a layup. 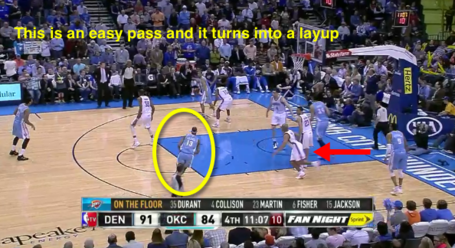 Cutting from the baseline is a lost art in a game that has become so much about spacing. The Nuggets mask their lack of outside shooting extremely well with plays like these.

In Andre Miller, the Nuggets have the league's best lob passer. You best believe that Karl has found ways to take advantage of this skill. Miller and Iguodala hooked up three times Tuesday on backdoor lobs, giving the Nuggets much-needed easy half-court shots.

Here's my favorite of the three from early in the second quarter, because it involves the kind of misdirection you normally see from efficient offenses like the Spurs. Watch how Iguodala will circle from one side to the other and sneak behind Oklahoma City's defense for the dunk.

The play begins with Iguodala receiving a down screen from Faried. It looks like a classic curl for Iguodala to catch the ball on the left wing. 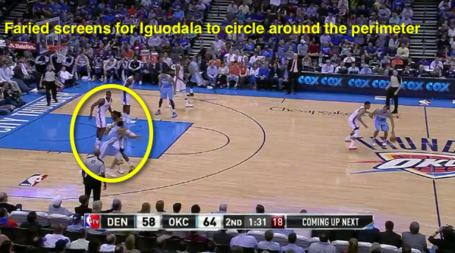 But as you'll see in these next few shots, that action just sets up two subsequent screens that confuse the heck out of Oklahoma City's big men. 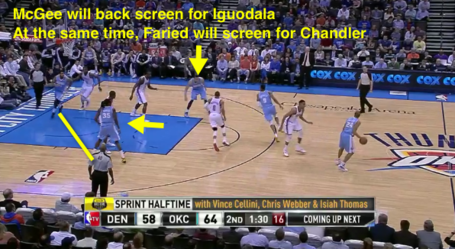 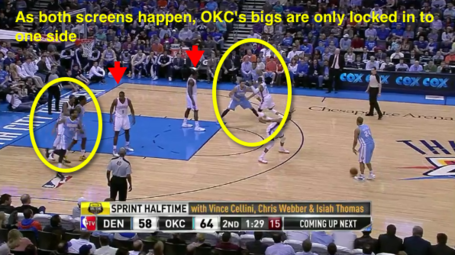 This is classic misdirection, made possible by stunning lack of awareness from Perkins and Serge Ibaka. Perkins is zoned in on his own man, thinking Ibaka will slide back and cut off Iguodala cutting backdoor. Ibaka, meanwhile, has his eyes glued on Wilson Chandler, thinking that the Nuggets are only running one play. The end result is that Iguodala gets stunningly open. 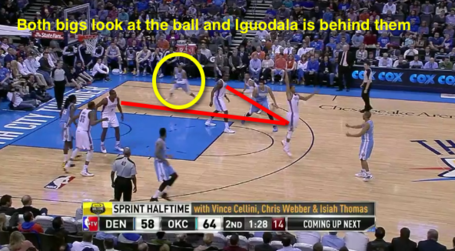 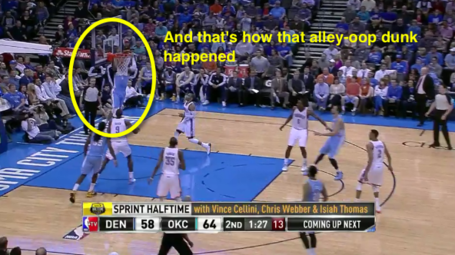 3. Stationing players out of bounds

This is by far the funkiest thing the Nuggets do. When the 94 feet of the court offer too little room to generate spacing, why not use more than 94 feet? This trend was first noticed by Grantland's Zach Lowe and has continued since.

Tuesday's win over the Thunder included my favorite of the "Nuggets stand out of bounds" sets. Here's video of the play in realtime.

Notice how not one, not two, but THREE Nuggets players are not inbounds on this Miller isolation. 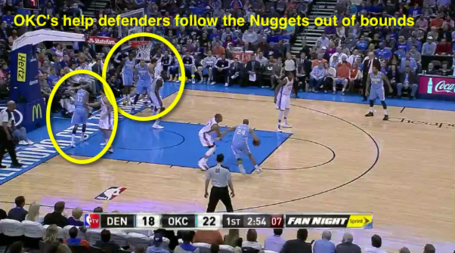 Amazingly enough, Brewer, Faried and McGee have all pulled their primary defenders with them off the court. This is something the Nuggets know will happen -- Karl told Lowe, with a chuckle, that "sometimes, the other team guards you out of bounds."

The effect? As Miller surges by his initial defender, the three Thunder help defenders are all too far under the hoop to properly contest Miller's layup. 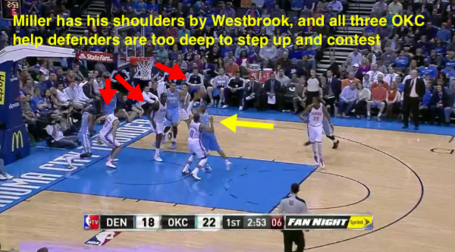 You could stretch this concept a looooong way -- imagine a team telling one of its players to sit on the bench, then spring onto the court when needed -- but at its most basic level, it's genius. What better way to hide your cutters than to station them off the court? And if the Thunder's defenders are so concerned about the cutters that they'll follow them out of bounds, you end up with easier isolations.

It's just one of the many ways the Nuggets mask their lack of shooting in half-court situations. This isn't a gimmick team that can only succeed when running. It's becoming increasingly clear that they can execute better than anyone thinks, and that means they are legitimately dangerous come playoff time.