In our debut 2013 NBA Mock Draft, we break down the Shabazz Muhammad news, the plethora of interesting wings and more.

This is a stunner. I certainly did not have Shabazz Muhammad in my The Next Yi Jianlian pool. I'm not saying I was sure it'd be a Chinese-born player, despite that country's history of curious young athlete age changes. But I at least figured it'd be a foreign-born prospect, not one from freaking Las Vegas.

How does a kid every basketball scout (college and pro) has been watching since eighth grade fool everyone about his age for six years? What's funny is that one of the knocks on Bazzy has been that in high school he just physically dominated his opponents with a much more mature body. If we'd only known.

To complete his transition to becoming the next Yi Jianlian, Bazzy must now post up a chair in draft workouts and execute a brief holdout after being drafted by a team not on his preferred list. Given that Yi was a big and Muhammad is a wing, maybe Bazzy will instead face up on an Ottoman. We'll see.

In this debut 2013 NBA Mock Draft, we'll find a good home for Muhammad via that time-honored science: baseless guessing. This is not your normal mock. I have no inside information, poor intuition, clear biases and bunk theories. Wait, that means that this is exactly like every other mock draft!* I'm just the only one who admits it. One note on order: we don't know the order, so we'll use reverse standings for now.

* There are two exceptions: DraftExpress and Chad Ford.

Alright, enough of that. Let's mock.

The desire to draft Nerlens Noel, a potential franchise cornerstone, will be strong. But also, he's going to miss most if not all of his rookie season. I trust Rich Cho enough to ignore that and take him anyway. I do not trust Michael Jordan to approve that. Instant impact rules the day!

As my pal Kevin McCauley has pointed out, drafting Noel is like winning a double lottery: because he's injured, you're almost guaranteed a second high lottery pick in 2014. This is how you build through the draft: you pick high-profile prospects who totally don't help you win as rookies! It's like Kevin Durant scoring 20 points per game on like 25 percent shooting, winning R.O.Y. and setting up the Russell Westbrook pick. (Note to self: check that field goal percentage number.)

The Cavaliers are definitely picking a small forward. That's the only position they haven't used a lottery pick on over the past two seasons. But in the grand tradition of Chris Grant's slightly odd choices (Dion Waiters at No. 4, Tristan Thompson at No. 4 also), the Cavs don't take the best SF prospect, they take the one with the most bizarre family. Byron Scott quits on the spot, which would be awesome, because it would make Shabazz responsible for killing two coaches' jobs (Scott and Ben Howland) before stepping on an NBA court for the first time. 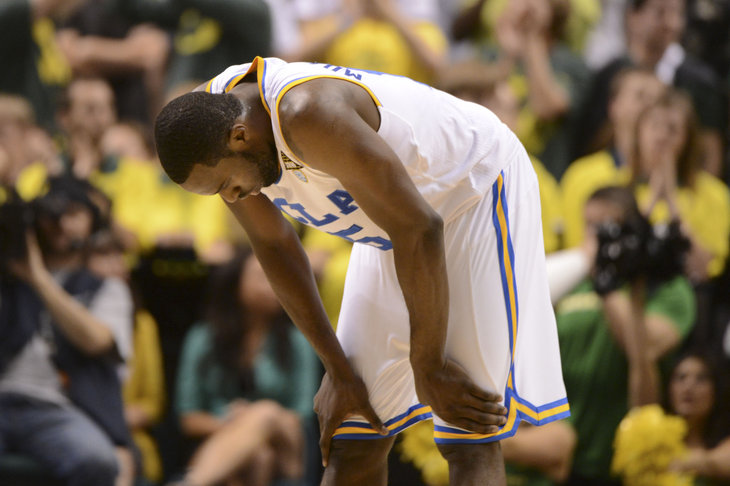 Fear the Sword on a rough March for NBA Draft hopefuls.

I almost slotted in a point guard due to the Kendall Marshall fiasco, but then remembered a) the Suns front office is awful, b) after picking Marshall, the Suns overpaid Goran Dragic (see point a) and c) Phoenix has a weird thing for brothers.

And the Pistons officially become my new favorite non-Sacramento team. Yes, it's Otto Porter that I weirdly like more than I should this year.

Word of caution to other mockers out there: if you dare replace "Sacramento Kings" with "Seattle SuperSonics" in your mock before the NBA makes its decision, I will find you and I will stab you with a very sharp Dario Saric.

Remember how David Kahn got like 18 draft picks a couple years back? Minnesota could use that right about now.

I would have picked the Wizards to take the oldest prospect possible to fuel a playoff run, but Shabazz is already off the table.

So how did this pick end up in the hands of the Thunder? Glad you asked. Toronto sent it to Houston in the Kyle Lowry deal, and Houston sent it to Oklahoma City in the James Harden deal. It's protected in the top three and outside the lottery. So basically this is perfect for the Thunder. The Raptors are bad but not totally terrible, so OKC gets their pick ASAP. Note to bad teams: STOP TRADING YOUR LOTTERY PICKS FOR ANYTHING LESS THAN STARS. Kyle Lowry is neat, but he's not a star.

Regarding Gobert: Sam Presti was the only GM to scout his match-up with another top international, Mam Jaiteh, in France in February. That game was like a week after the trade deadline. And per Draft Express, in that game Gobert had 14 points on five shots with 14 rebounds. So yeah. OKC-bound for sure, if he's on the board.

Another frontcourt player for Philly to hate!

I don't think there's a major local angle with the Zags here, but there is a PORTLAND NEEDS A CENTER angle.

It's quite possible this will be the year Dallas flips their lottery pick for a European wunderkind who will eventually notch a title and an MVP.

I almost certainly don't know what I'm doing, but I do know that Utah needs a damn point guard or three.

• How the NBA can compete with NCAA's one-and-done stupidity