Can Heat win 33 in a row? A look at their upcoming schedule

The Heat are moving closer and closer to the Lakers' record of 33 wins in a row. However, a four-game road trip with games against the Bulls and Spurs stands in their way.

Share All sharing options for: Can Heat win 33 in a row? A look at their upcoming schedule

With Dwyane Wade resting a sore knee, the Miami Heat won their 26th game in a row on Sunday night, beating the Charlotte Bobcats, 109-77, behind 32 points, 10 assists and eight rebounds from LeBron James. The Los Angeles Lakers' record of 33 straight wins is in plain view, and it's only natural to take a little peek at the Heat's upcoming schedule to evaluate their chances of reaching that hallowed mark.

March 25 at Magic -- Miami kicks off a four-game road trip against Orlando, who has surprisingly played the Heat really tough this year. In two prior meetings this season, Miami has won by a combined three points. In the last game on March 6, the Heat needed a James basket in the final seconds to pull out a win. However, with Arron Afflalo and Nikola Vucevic banged up, this would seem like an easy victory for Miami. Not having Vucevic especially hurts, because the young big man has torched the Heat this year.

March 27 at Bulls -- This should be one of the tougher games left, because Chicago usually gives Miami a challenge. The Bulls did beat the Heat in Miami earlier this year, although the Heat destroyed the Bulls in Chicago right after the All-Star break. A big factor could be the health of Joakim Noah. The Bulls' big man has missed the last two games with plantar fasciitis, and not having him to patrol the paint against the high-powered Heat offense could be a recipe for disaster. There's also the outside chance that Derrick Rose makes his return, but it's looking more and more likely that he'll be sitting out the season. 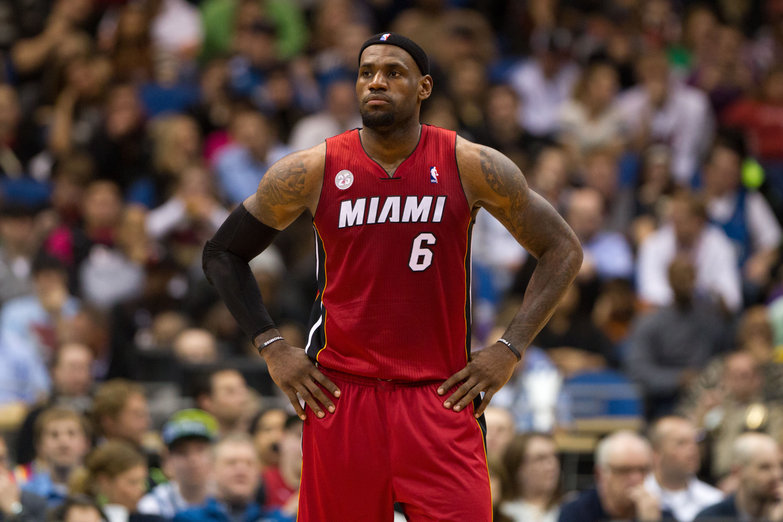 LeBron James is the best player in the NBA and there's no close second, but it's more than that. What LeBron's become this year is as incredible as the NBA ever gets.

March 29 at Hornets -- Miami torched New Orleans in their lone prior meeting this year, and there's not much reason to expect anything otherwise in this one. However, there's always the chance of a letdown after the game against the Bulls, especially if that one is high intensity and goes down to the wire. We saw what happened against the Cavaliers after the Heat pulled out an emotional victory against the Celtics. Still, it would be tough to imagine a team like the Hornets ending the streak if it's still going.

March 31 at Spurs -- If the streak is ever going to end, this would seem like the most likely time for it to happen. San Antonio is 30-4 at home this season and nearly beat Miami earlier this season despite resting Tony Parker, Tim Duncan, Manu Ginobili and Danny Green. Going against the Spurs' favor is the fact that they'll be in the middle of a hellacious stretch that also features games against the Denver Nuggets, Los Angeles Clippers and Memphis Grizzlies. This would likely be the most anticipated regular season game in quite some time if the streak is still alive going into this Easter Sunday tilt.

April 2 vs. Knicks -- New York marks another big challenge for Miami, especially with Carmelo Anthony rounding back into form after coming back from injury. The Knicks have won two out of the three meetings thus far this season, with those two wins both coming by 20 points. The Heat did win the last matchup at Madison Square Garden on March 3, rallying in the fourth quarter to victory. Tyson Chandler should be back from a neck injury at this point, which would provide New York with a huge boost.

April 5 at Bobcats -- It's the Charlotte Bobcats. There's no chance in hell they end the streak if it gets to 31 unless LeBron, Dwyane Wade and Chris Bosh all get hurt. And even then it would not be surprising if the Heat still won.

April 6 vs. 76ers -- Miami has won all three games against Philadelphia this year, although the last game was really close. But playing at home with No. 33 potentially on the line would likely bring out the best in the Heat, so the floundering Sixers would have to play their best game of the year to have a chance of ending the streak.

April 9 vs. Bucks -- At home. A possible chance at history. Do you really think the Heat would lose this game? Anything can happen, of course, and Milwaukee did beat down Miami once earlier this year. But the way LeBron and the Heat have been playing, it's hard to envision them blowing a game like this if the record is on the line.

Outlook -- With LeBron taking his game to a new level this season, it's impossible to dismiss the Heat's chances of reaching 33 wins in a row or more. However, Miami has won several games lately by the skin of their teeth and have been forced to rally from big deficits on multiple occasions. At some point, that's going to come back to bite them. With Wade not quite at full strength, I would expect at least one loss to the Bulls, Spurs or Knicks.

• How the NBA can compete with NCAA's one-and-done stupidity

• Andrew Sharp: LeBron is our MJ