John Wall scored 47 points against the Grizzlies Monday, and gave the NBA one loud reminder: he's much better than you think, even if he's not quite there yet.

Share All sharing options for: The John Wall reality check

In John Wall's third game of his career, he went insane.

That night, it was the No. 1 pick facing off against the Sixers and that year's No. 2 (Evan Turner), and with everyone hyping the showdown, he had 29 points, 13 assists, and nine steals to seal an overtime win. In his third NBA game. A week later, he had 19 points, 13 assists, and 10 rebounds in another win. People forget this when they argue about Wall and what he's worth.

There was a time when John Wall looked like he was from another planet, just like Derrick Rose and Kevin Durant and Russell Westbrook and all the other alien superstars.

Wednesday against the Grizzlies (47 points, eight assists, seven rebounds), or last Friday against the Lakers (20 points, 16 assists), or the Friday before that against the Hornets (29 points, 10 assists) were our reminders that two-and-a-half years later, he's still not completely human.

We're talking about "what John Wall's worth" because he's eligible for a contract extension this summer, so there will inevitably be 10,000 blog posts about whether he deserves it. Last week, he told the Washington Post he'd be disappointed if he didn't get that an offer for a max extension this summer. To put that in perspective, a max extension for Wall would probably add up to something like five years and $82 million, on par with guys like James Harden and Russell Westbrook.

John Wall drops 47 on the Grizzlies

And it's laughable to put Wall in the same stratosphere as Westbrook and Harden.

It definitely was last week.

But now here we are, digesting another unreal performance from Wall in a month full of them, and the question's not so easy.

Monday, the Wizards were playing without Nene, Bradley Beal and Martell Webster against a Grizzlies team that's spent all year battling at the top of the Western Conference. The Grizzlies were missing Marc Gasol, but still. This was supposed to be a game to pad the Wizards' tanking efforts.

John Wall played, though, and he took over. He had 21 points in the first half, hitting jumpers from the foul line, slashing to the rim and generally carrying a Wizards offense that had no business keeping up with Memphis. Then, with the game close in the fourth quarter, Wall had 17 points and four assists, getting to the line 14 times and getting the Wizards a win. He finished with 47 points, eight assists, and seven rebounds, and it was all part of a perfect night. The night when Wizards fans remembered why Wall used to give everyone hope, and a night when Wall gave all the critics a reality check.

His jumper has been falling lately, and suddenly he's a whole different player.

After three years of Wizards fans waiting, we looked up Monday and saw Wall hitting jumpers he used to miss, dismantling one of the best defenses in the league and carrying a team of plug-ins to a win in front of a delirious crowd. It was like the climax of a movie montage. 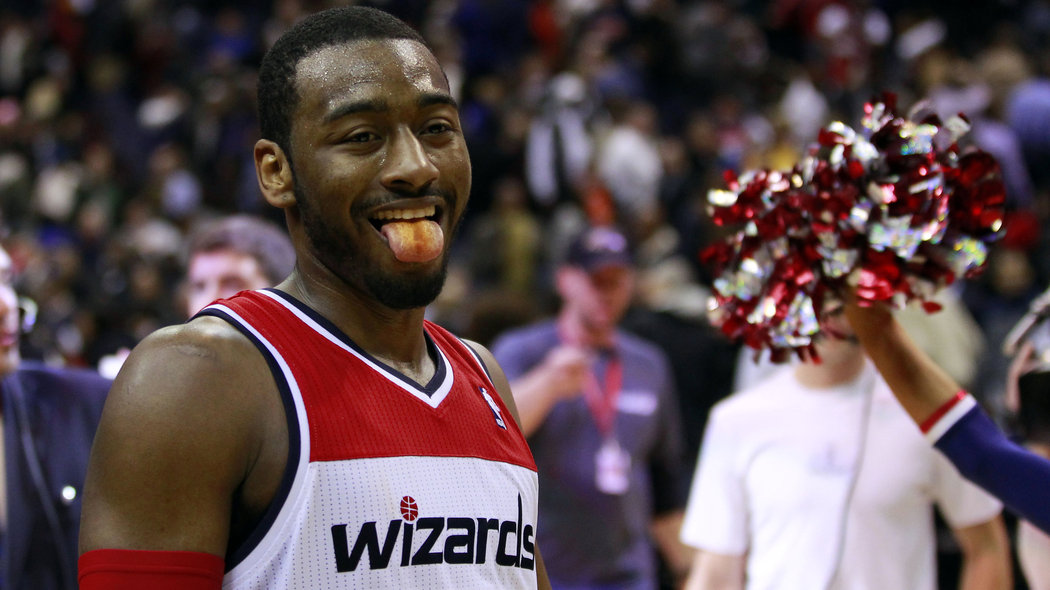 Sure, in real life the montage was three years of quietly flirting with mediocrity and a cold war of reputations with Brandon Jennings. But still. HE'S A MACHINE NOW.

In between, there was Saturday against the Warriors, where Wall had 14 points before getting himself ejected midway through the third quarter.

All of which is to say, there are two reality checks after Monday and Wall's 47 points.

But even if nothing's set in stone after Wall's renaissance the past few weeks ... I've watched him for three years, and Monday night was the first time since that first month I went back to believing he can be dominant. Like, 47-points-and-no-one-else-matters dominant. The kind of player that's worth $80 million. He's as freakish as any athlete in basketball, his jumper really is getting better, his decision-making's been so thoroughly skewered that at this point it's badly underrated, and for the first time in his career, he might actually be surrounded by a decent supporting cast.

Does any of this translate to an NBA superstar who deserves superstar money?

The Wizards and everyone else should wait and see before they decide.

For now, enjoy the show. Because I don't know how it happened or why it took this long or how long it'll last, but it doesn't get much more insane than John Wall these days.

• The impact of Denver's depth