The Miami Heat are still six victories away matching the longest winning streak in NBA history, but season LeBron James and his teammates are turning in already feels historic.

Share All sharing options for: The Miami Heat are special no matter what happens with their winning streak

LeBron James had scored only six points midway through the third quarter on Monday night vs. the Orlando Magic, but the outcome always felt inevitable. It's been that way for the Heat on their 27-game winning streak for a while now -- maybe since they overcame that impossible 43-point game from Jeff Green to beat the Celtics in Boston for No. 23, maybe since they erased a 27-point deficit in Cleveland two nights later to get win No. 24.

The point is, Miami was always going to beat the Magic in front of a pro-Heat crowd in Orlando. It was only a matter of time before the overwhelming athletic and tactical advantage the Heat play with took over. Tobias Harris is nice, sure, but come on. Few teams have the guns to even keep it competitive with the Heat when they're locked and loaded and Orlando certainly isn't one of them.

And then it happened. Jameer Nelson hit a three to tie the game at 68 with three minutes left in the third quarter. Miami pushed the ball with LeBron trailing the whole time. As he crosses half court and picks up a full head of steam, there isn't a body on him. The Heat have turned a made basket into a fast break and now the Magic are dead.

LeBron gets the pass as the trailer and throws down the same vicious one-handed tomahawk dunk he's been perfecting since he was in high school. It's violent and graceful and, for the Magic, a means to an end . By the time there's 10:20 left in the fourth, the Heat are up 11. It grows to 13 when Mario Chalmers finds James for an alley-oop over poor Beno Udrih, this one put down with only slightly less malice than what he recently did to Jason Terry. A couple possessions later, LeBron throws a lob to Chris Andersen and the rout is on.

Bulls vs. Heat preview: Chicago braces for a Heat-wave 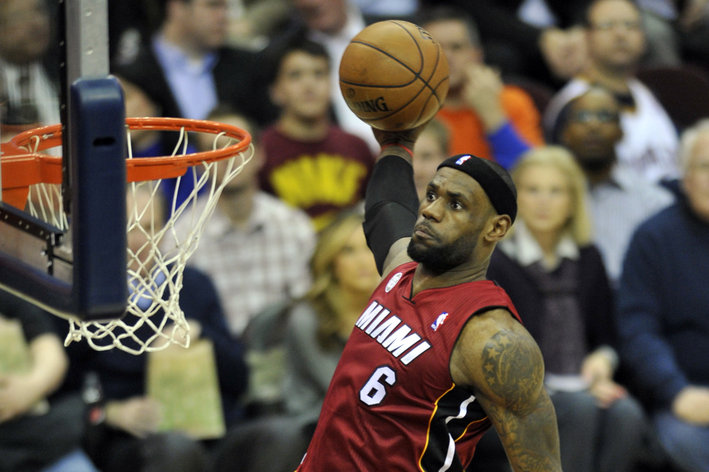 The Heat are now six games away from tying the 1972 Lakers' mark for the longest winning streak of all-time. Maybe they'll get it, maybe they won't, but it might not even matter in the big picture. What's already fact is that the Heat are playing historically great basketball, and they're evolving the game as they're doing it. This is what every NBA fan outside of south Florida feared when LeBron and Chris Bosh signed. This is what Miami envisioned when they threw themselves a championship parade before they ever played a game.

It's hard not to think back to that welcome party as Miami continues to stockpile victories. It was deplorable in concept and an embarrassment after Miami was defeated by the Dallas Mavericks in the NBA Finals, but it did leave a line that could live forever. LeBron leaned into the microphone and uttered those famous words, "..not two, not three, not four, not five...."

At the time, it was an exclamation point to the backlash James faced in the wake of The Decision. It hammered home his status as the most unpopular athlete in the world, and the Heat's status as the team everyone would root against.

Now, LeBron's words might just look prophetic. Miami still has a long ways to go from "not five." Injuries can happen, early termination options can be exercised, a close competitor like the Thunder or Spurs could find more internal improvement or upgrade the roster with a new addition. It's all possible. But right now, it'd be foolish not to consider Miami the favorites for the NBA landscape's foreseeable future.

What isn't up for debate is that the Heat already feel special. It's a combination of a few different things:

The public perception might be changing, too. James is no longer a universal villain and the Heat aren't the enemy until they're playing your team. Miami is exhibiting all the qualities we want for our truly great teams: goofy off the court, serious as a heart attack on it. They're enjoying themselves. They know the history of the game. Even they're impressed by what they're doing, if not totally surprised. Five years after Nike's original ad campaign ran, it really does feel like "we are all witnesses.